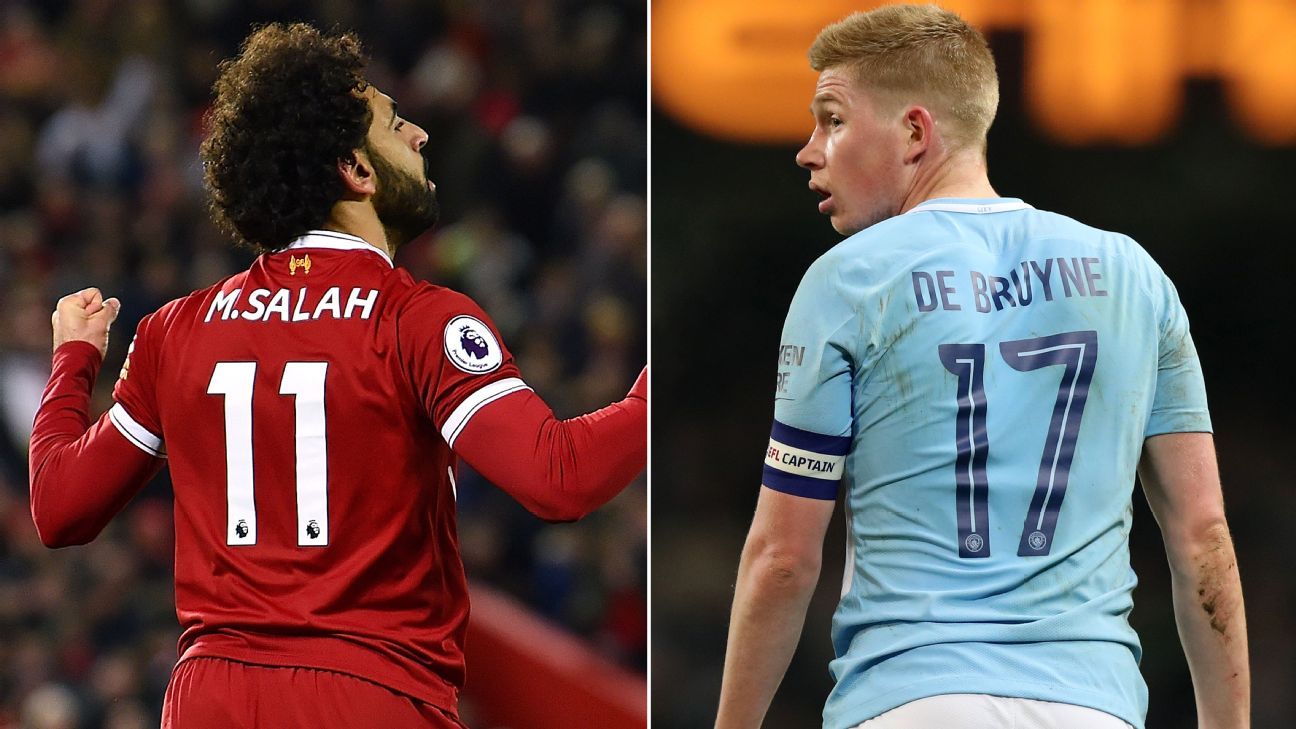 
The Premier League Player of the Season award has become a two-horse race between Liverpool’s Mohamed Salah and Manchester City’s Kevin De Bruyne.

With only a few games remaining, a strong argument can be made for either player, as De Bruyne has keyed City’s dominance in the league while Salah is chasing the Premier League single-season goalscoring record.

Even if a groin injury for Salah means the two do not meet at the Etihad in the Champions League second leg on Tuesday, they will still go head to head for the biggest individual accolade in English football. Our club correspondents Jonathan Smith (Man City) and Glenn Price (Liverpool) make their case for each as the Premier League Player of the Season.

Hit us with the stats. What makes these two so special this season?

Jonathan Smith: De Bruyne is an all-round attacking threat — scoring goals and dictating the play whether it’s quick counterattacks or slower build-ups, but the most telling statistic is his assist total. He has provided 42 league assists over the past three seasons, the highest total by a player in the big five leagues in Europe during that span. De Bruyne tops the Premier League charts for this season with 15 — ahead of his own teammates Leroy Sane (12) and David Silva (11) and also led the league last season with 18.

Glenn Price: It seems like every time Salah finds the back of the net, another record falls. Two more goals and he will become the first Liverpool player since Ian Rush in the 1986-87 season to break the 40-goal mark. That is quite the achievement considering all the firepower Liverpool have possessed over the course of those three decades. Simply put, it’s something Robbie Fowler, Michael Owen, Fernando Torres and Luis Suarez all failed to do during their time at Anfield.

What are they getting from Jurgen Klopp/Pep Guardiola that Jose Mourinho didn’t give them?

JS: Belief is the biggest difference between De Bruyne under Guardiola and Mourinho. Even in the Belgian international’s own words, he is a “high-risk player” which is why his passing accuracy statistics are a lot lower than other players at his position. But Guardiola is a high-risk, high-reward manager and encourages him to play adventurous football whereas Mourinho is far more conservative. De Bruyne is one of the Catalan’s lieutenants on the pitch and Guardiola has complete trust in his qualities to deliver.

GP: The tactical instructions Klopp has given the Egyptian is something all of his managers, Mourinho included, failed to devise. Even after signing Salah, Klopp still wasn’t aware he had the ability to play centrally as a forward before it soon became clear after his blistering start. Instructions from the coaching staff to stay closer to the goal have seen Salah maintain his record-breaking form, proving himself to be a natural goalscorer this season. He’s simply a different player from his time at Chelsea.

How do you stop them?

JS: It’s easier to stop De Bruyne’s options than it is to stop De Bruyne. Frustrating City’s slick passing game by slowing them down can be effective, although, even then, they can find a way through. De Bruyne’s quickness of thought and vision puts him a step ahead of virtually everyone else on the pitch but he’s only effective if the players around him are moving and creating space. Sane, Raheem Sterling, Sergio Aguero and Gabriel Jesus have been masters of movement this season but if they can be tightly marked, De Bruyne’s impact can be lessened.

GP: Though Mourinho barely used him during his time at Chelsea, Manchester United managed to keep Salah quiet more than any other side this season when Liverpool rolled into Old Trafford full of confidence last month. Salah headed into the United game having scored in seven out of Liverpool’s previous eight matches, but Mourinho’s game plan of a narrow back four, shielded by a disciplined holding midfielder in front, nullified Salah and his two other forward partners. That said, other managers have tried to adopt a similar approach, but Salah’s quality has eventually broken through in those games.

Who will come out on top in the second leg?

JS: The second leg has become the perfect platform for De Bruyne to show he is in the highest class of players on the planet. If City are to overturn a three-goal deficit, it’s difficult to see them doing it without De Bruyne at his very best. Two defeats and six goals conceded in the last two games has rocked City’s confidence but they are one of the few teams capable of turning around this kind of deficit in the second leg. It’s improbable but not impossible.

GP: Liverpool are already confident heading into this second leg holding a three-goal lead. If Salah manages to prove himself fit for the Etihad encounter then Liverpool supporters can afford to start thinking about who they want in the semifinals. Of course, City are more than capable of scoring three, although Liverpool won’t be turning up to sit on their lead, especially if Salah, Sadio Mane and Roberto Firmino all play. Klopp will be hoping there’s no extenuating circumstances at City this time around after Mane’s controversial red card in September.

Why do they deserve the Player of the Year award?

JS: Quite simply, De Bruyne is the best player on the best team in England. Despite the recent setbacks of a first-leg loss to Liverpool and shock derby defeat to Manchester United, City have dominated for the last seven months. De Bruyne has made a significant contribution in every single match — the United defeat being the only game he hasn’t started this season — as well as turning in brilliant individual performances in big games at Chelsea and Man United and at home to Liverpool and Tottenham.

GP: Salah has continued to defy the odds this season. There were concerns about whether he was a player suited to the Premier League after Liverpool decided to spend an initial £36.9 million. And then once it was realised he was misused at Chelsea, Salah was then tasked with ensuring his goalscoring form was not just a purple patch. He has smashed those doubts out of Stanley Park. Scoring 29 Premier League goals — in all types of manners — by this stage of the season, while crafting nine assists in the process, is just too good to ignore, as fantastic as De Bruyne has been.