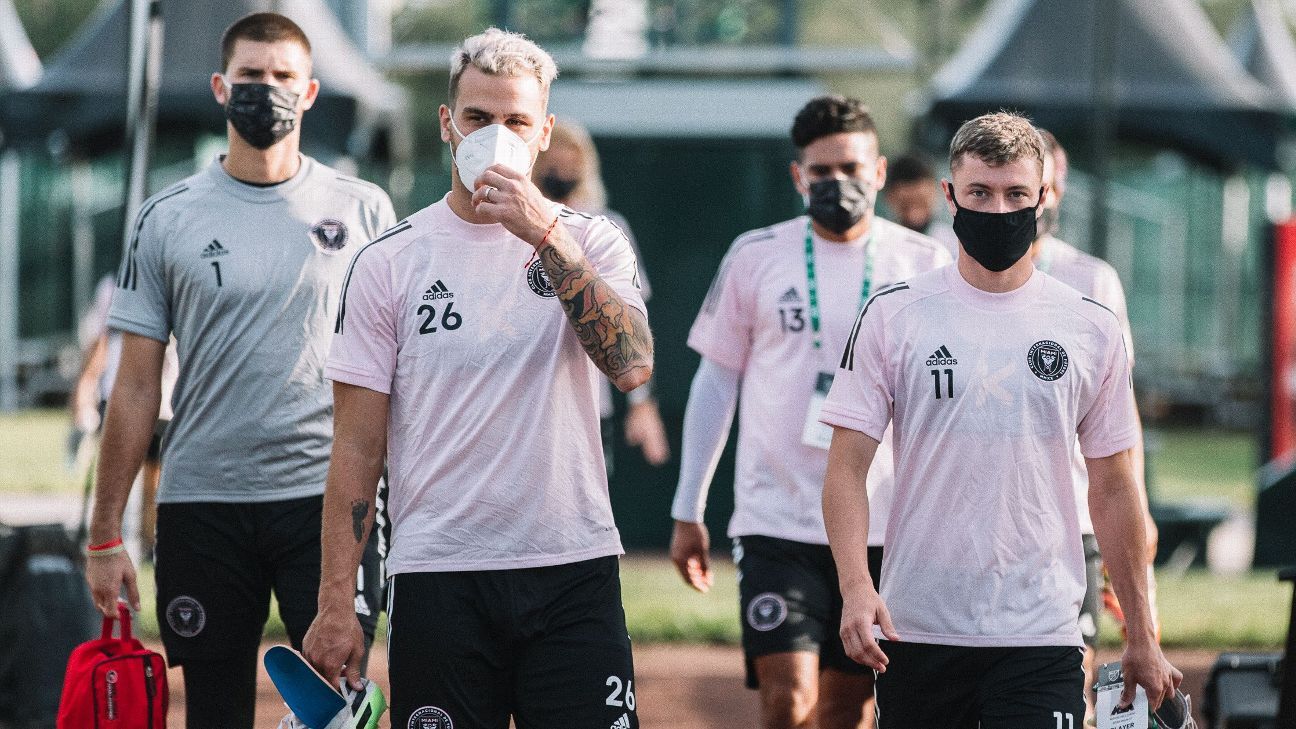 With reporting from Stefano Fusaro in Orlando, Florida.

It has not been a smooth road for Major League Soccer to get back to action in Florida, but the MLS is Back Tournament (stream all games LIVE on ESPN and ESPN+, U.S. only) begins in earnest Wednesday night. Amid a backdrop of positive tests, the withdrawal of FC Dallas and stars such as 2019 MVP Carlos Vela and Real Salt Lake defender Nedum Onuoha, professional men’s soccer in North America will return with the first-ever game between Florida teams Orlando City SC and Inter Miami CF, almost four months since the 2020 season was suspended.

Orlando City coach Oscar Pareja talked about the tournament being much-needed “for entire communities,” while Atlanta United manager Frank de Boer was more cautious in his assessment, saying judgment on the success would be made when the tournament comes to an end.

– Stream MLS is Back on ESPN networks, app | FC Daily on ESPN+
– Carlisle: Why your team will win MLS is Back… and why it will not
– Schedule, TV info: What you need to know about MLS is Back

Montreal Impact boss Thierry Henry is welcoming a return to a sport that saw him reach the very top in Europe, but he’s also realistic about what it all represents and how it relates to the crisis the United States and large swathes of the world have gone through in 2020.

“The players are the way they are, they have to deal with a situation that is not simple, and everybody has to deal with it,” Henry said Tuesday via video conference. “As we all know and we’re all sad about, people died; some people lost their jobs, some companies will never be there again. But we’re here, we’ve found a way to come to this tournament.”

Not far from the field on which Inter Miami and Orlando will lock horns is a bubble within the bubble. Inside, FC Dallas players and staff are in an indefinite quarantine in hotel rooms, having been removed from MLS is Back on Monday because 10 players and one member of staff tested positive for COVID-19. A doctor evaluates those with symptoms regularly, but the squad might be cooped up another week or more, until all the players provide negative tests, although different scenarios to get players home are being discussed.

Excluding the Texan team was a tough decision for all parties, made even more difficult because all the conversations had to be conducted via phone or Zoom.

“The secondary [priority] is the tournament, the competition,” FC Dallas coach Luchi Gonzalez told ESPN in Spanish on Tuesday. “The first priority is the health of the group.” Now the unknown is when the team will be able to leave the Orlando resort and return to Dallas. One leading idea involves sending players home in two groups.

MLS went into the tournament “knowing there would be some impact from this virus on our tournament,” said MLS commissioner Don Garber, who stressed that sport — like the rest of society — is trying to adapt to the challenges posed by COVID-19. One FC Dallas player said that it has been a “really stressful time,” especially working out the process of getting home to be with loved ones, but agreed that “the club and the league did the right thing” in ending the team’s participation before it had even begun.

Herculez Gomez examines whether Atlanta United can cope without Josef Martinez in pursuit of another trophy.

The message from the league is that the FC Dallas case highlights the effectiveness of the bubble and its protocol in isolating players who test positive on arrival.

“It was a tough decision to make, but one we felt was the right decision for the MLS is Back tournament,” Garber told ESPN.

“There was a lot of concern and compassion that the group was showing and being communicated with us as a staff that we also needed to communicate to the league so that we could find solutions.”

The squad’s morale has been boosted by the players who have tested positive — the names haven’t been released — talking to the rest of the group, telling them not to worry and reassuring them that they are feeling strong, according to Gonzalez.

News came Tuesday that Nashville SC has five confirmed COVID-19 cases and four other suspected cases, with MLS vowing to “continue to evaluate Nashville SC’s participation in the MLS is Back Tournament following the results of additional testing.” The results meant the postponement of their July 8 tournament opener against Chicago Fire, but the majority of players are pushing through the difficult situation and focusing on the games.

“To be honest, I feel safe,” Orlando’s Nani said in a video conference. “Since I arrived in the hotel I saw the conditions, the way they manage everything for the players to be safe I agree with and I see all the players, all the teams, they look happy, they look comfortable with all the protocols.”

“First of all, it’s a shame what happened with FC Dallas, but the health and well-being of everyone is always most important,” said Sporting Kansas City‘s Alan Pulido on Tuesday in a video conference. “Being here, [the positive cases] do catch our attention, but it doesn’t mean anything will happen to us. We have to keep following the measures that are required, like using face masks, regularly wash our hands, not having contact with others because you don’t know what it could mean.”

“You try to be responsible, but obviously we’re here for the tournament, focusing on winning, which is important and why we’re here.”

“We didn’t have any positive cases,” de Boer said of Atlanta. “We are now on the third time we were tested. So I think we’re really feeling safe. All the safety measures are here to feel safe.

“When Dallas came here, they were probably contaminated already in Dallas itself. That’s different. I think when people get contaminated here, it’s a different case I think. I think people really feel safe right now. I think MLS and the hotel, Disney, are doing everything possible for us to feel at home here.”

Sporting KC coach Peter Vermes noted that the 45-person team delegation (including players) had been tested “easily over 1,500 to 2,000 times [since returning to training], and we’ve had all negatives,” though he did admit that someone in his group had “one unconfirmed false negative, which became a false positive.”

But while the message from coaches and players in press conferences has largely been that the protocols are working and that they feel safe, reigning MVP Vela announced Monday he would not be traveling to Orlando because of his wife’s “risky pregnancy,” according to a statement. LAFC backed the player’s stance, as did MLS.

“I just want to reinforce that I stand 100 percent behind Carlos,” LAFC coach Bob Bradley said Monday. “It’s an important time for him to be with his family right now. We’ve talked about it within the team, the rest of the coaching staff, all his teammates feel exactly the same way.”

Vela wasn’t the only no-show in Orlando on Monday; Onuoha confirmed on Instagram that he didn’t feel comfortable traveling, either.

“I didn’t think leaving my wife and three kids in the middle of a pandemic was a good idea, especially for a month,” wrote Onuoha on Instagram Stories. “You’re entitled to disagree but just know I am very comfortable with my decision.”

LAFC’s Bradley Wright-Phillips chimed in, via The Sports Bubble podcast, by saying he thinks the restart in Orlando is “a little bit stupid.”

Despite the concerns, tests and questions about how and when FC Dallas will make up its games — the first three of which count toward the regular-season standings — the tournament is finally getting underway and teams are ready to play.

“Concerns and worries started months ago, when this pandemic started in every corner of the world,” said Orlando’s Pareja. “At this point, when we committed to this project of getting here and trying to get MLS back and getting into the protocols, we feel fine, we feel safe, it’s normal that there is risk around.”

“What is happening to other teams is obviously not good news, but we are totally focused on the competition and trying to follow the restrictions, the protocols and trying to be safe,” he continued. “It’s what we can control. The other thing I think the whole planet is worried about.”