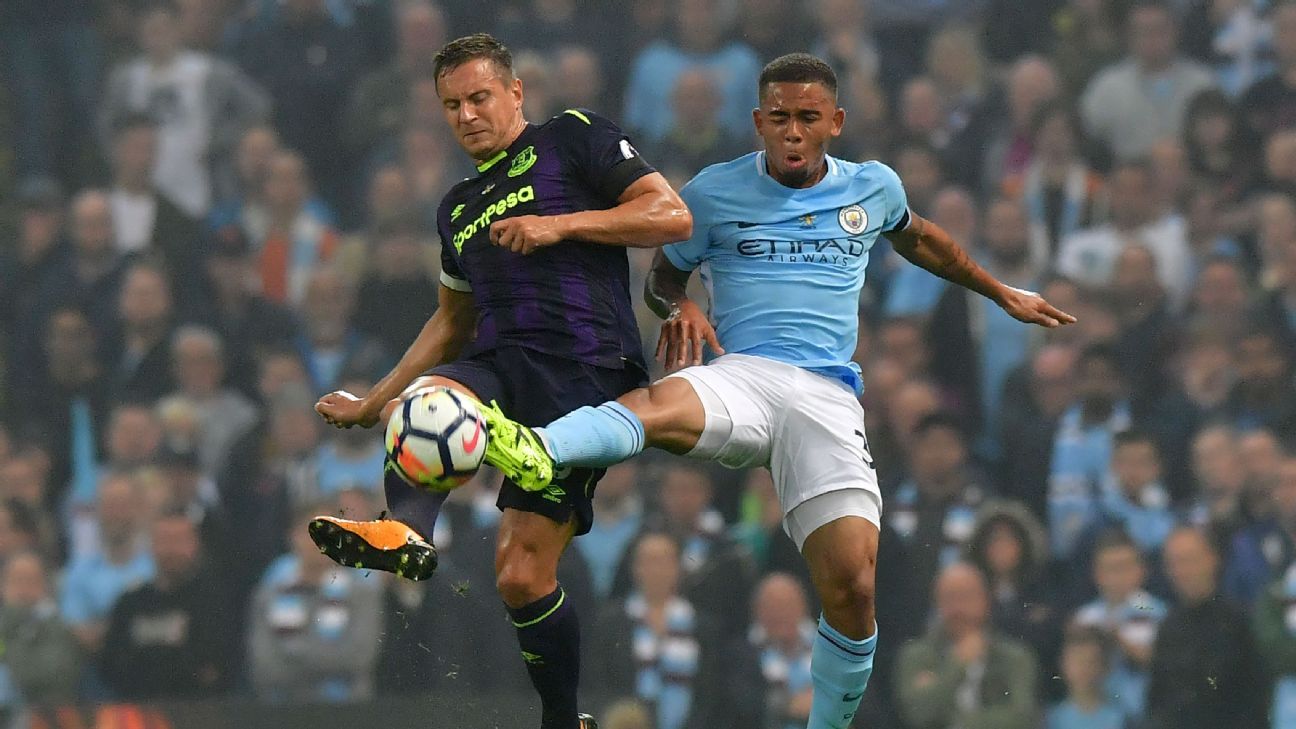 
An enthralling encounter that produced as many goals as red cards eventually ended with Everton and Manchester City sharing a 1-1 draw at the Etihad on Monday night.

This hard-earned point paradoxically left the visitors with plenty of positives while also feeling like a missed opportunity. Another Wayne Rooney goal against City and a determined and impressive defensive display held out until a rare lapse in the final 10 minutes allowed substitute Raheem Sterling to draw the home team level.

A finer balance between protecting the one-goal and one-man advantage earned in the first half and pushing for a decisive second goal after the interval could have turned one point into a statement-making three.

Aside from an unfortunate and misdirected header from the otherwise excellent Mason Holgate, this match underlined the tremendous defensive improvements this team has made in twelve months under the guidance of manager Ronald Koeman.

Everton appear a fitter, more industrious unit and are certainly more organised, disciplined and resilient in their attempts at keeping opposing teams at bay. When Sterling volleyed City level in the 82nd minute, it ended a run of four clean sheets and 441 minutes without Everton conceding in all competitions this season.

Despite the deserved superlatives reserved for the defence, Everton’s failure to impose themselves in an attacking sense in the second half ultimately cost them. Dropping too deep and without the necessary pace to threaten on the counter, the increasingly overworked defence was always susceptible to the type of individual error that eventually proved their undoing. Better retention and use of the ball was imperative.

7 — Koeman played this perfectly until the latter stages. After disrupting, unsettling and limiting the home side, Everton needed more attacking outlets, something to occupy a home team increasingly free to pour forward at will in their search of an equaliser.

GK Jordan Pickford, 7 — One poor clearance almost cost his team in the first half but distribution returned to expected levels thereafter. Twice looked beaten but got just enough on the ball to make a telling save on each occasion. Helpless with the City goal.

DF Mason Holgate, 8 — A surprise inclusion in an unfamiliar wing-back role, the young defender was an effective attacking outlet in the first half and a strong presence in defence, aside from the regrettable header handing City the opening they required.

DF Michael Keane, 7 — After a testing first half saw David Silva twice escape his attentions, with the Spanish playmaker hitting the post on one such occasion, the new recruit recovered well in the second period.

DF Ashley Williams, 7 — Experienced centre-back defended solidly in his 61 minutes on his pitch. Once again, though, Williams was the one sacrificed when Koeman changed formation.

DF Phil Jagielka, 8 — One City attack saw the Everton captain lose his footing at a crucial moment but still manage to halt the play. That moment typified his evening and the commitment and no-nonsense approach he brings to the team.

DF Leighton Baines, 8 — Spared his teammates with a great recovery tackle after an errant pass in the first half and never stopped working down the left flank.

MF Idrissa Gueye, 8 — Tirelessly fought and scrapped to provide a degree of protection in his attempts to stem the blue tide constantly moving toward him. Work rate never ceases to amaze.

MF Morgan Schneiderlin, 6 — Effective but not at his best after an early booking, the midfielder was rightly livid when awarded a ridiculous second booking and red card for what was a perfectly-timed tackle in the final minutes.

MF Tom Davies, 6 — Began in lively fashion, making intelligent forward runs and linking play, but a poor dive and subsequent yellow card dented his impact before his substitution after an hour.

MF Wayne Rooney, 8 — While answering doubts over his fitness by covering more ground than any of his teammates, the former Manchester United player scored for the second time in two league games, netting his 200th league goal and ninth against City in the process.

FW Dominic Calvert-Lewin, 9 — Particularly in the context of a match away to one of the top teams in the league, the 20-year-old striker was superb. Given a thankless task and often isolated, the young forward was still able to provide the assist for Rooney and occupy the home defence almost independently.

MF Davy Klaassen, 6 — Pushed closer to his own goal than he would have liked but made a vital interception at the far post in the final minutes.