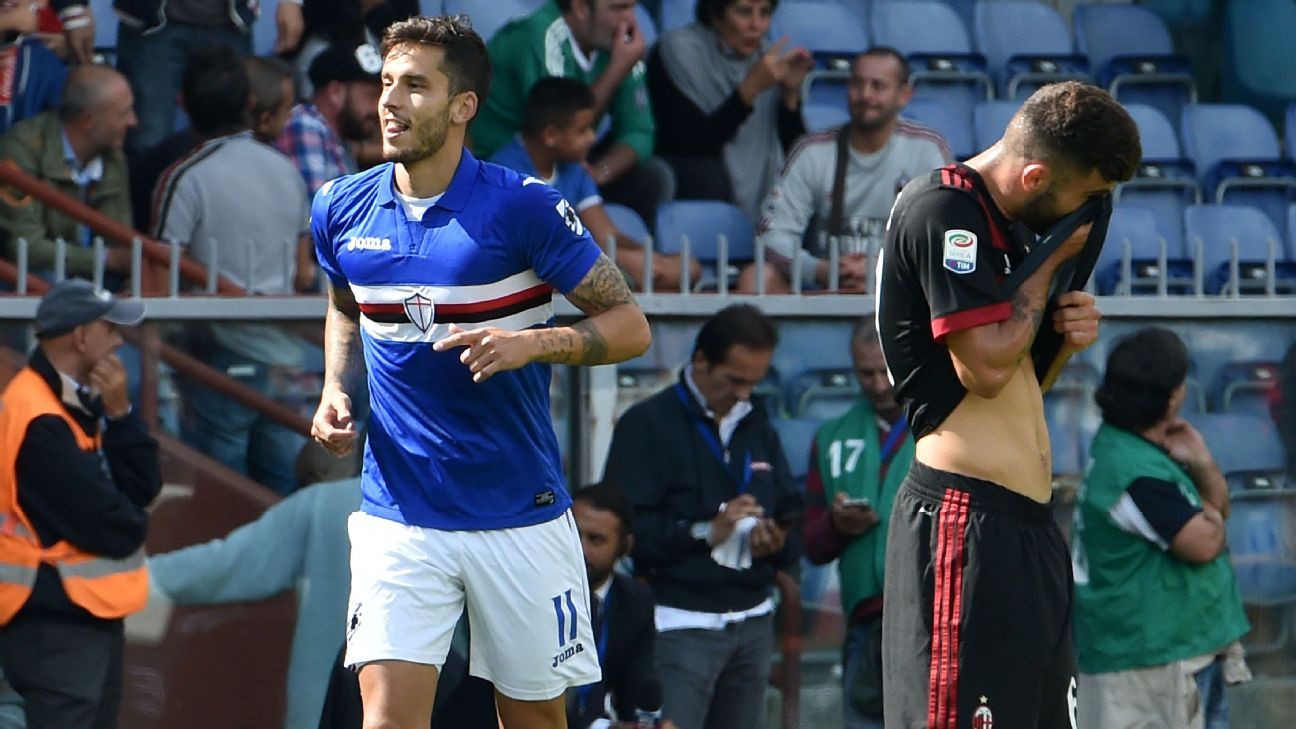 
AC Milan fell to a 2-0 defeat at Sampdoria on Sunday in what was their worst performance of the season thus far. Goals from Duvan Zapata and Ricardo Alvarez sealed a deserved win for the hosts as they inflicted a second loss of the campaign on the Rossoneri.

None. From the first minute of the encounter, Milan looked lacklustre, off the pace and not committed enough. Coupled with sloppy passing and no composure in possession, it was a recipe for disaster as they failed to manage a single shot on target.

The attitude of the players was arguably the most disappointing aspect of the loss, as they simply didn’t look up for it. It’s one thing the quality not being there but Milan shouldn’t be losing games in the manner in which they lost on Sunday.

4 — Vincenzo Montella also deserves a sizeable share of the blame for waiting so long to make changes. It clearly wasn’t working for Milan throughout the first half as they didn’t come close to scoring, and yet it still took a Sampdoria goal before Montella made changes in the 78th minute.

GK Gianluigi Donnarumma, 6 — Could do little on either goal as he was let down by his defence and didn’t have too much else to do but stepped up when needed.

DF Cristian Zapata, 4 — It was a really poor performance from the Colombian as he was at fault for both goals, particularly the first as he assisted his cousin with an atrocious attempt at a clearance. Lost the duel with Duvan Zapata on countless occasions and shouldn’t be in the team next week.

DF Leonardo Bonucci, 5 — Still hasn’t found his best form defensively, but his distribution was top class at times as he sprayed pinpoint passes down the field. Needs to be more resolute and commanding in the heart of the defence though.

DF Alessio Romagnoli, 6 — The best of the back three as he simply didn’t make mistakes. Attentive off the ball and composed on it, he kept Fabio Quagliarella quiet for the most part and did his job well in a solid shift.

MF Ignazio Abate, 5 — Flagged offside on numerous occasions, as he failed to read Sampdoria’s defensive line. However, even when he did beat it, he couldn’t find a decent cross and lost his mini-battle with Ivan Strinic.

MF Franck Kessie, 5 — More than anything else, the 20-year-old needs a rest. He looked sluggish, sloppy and not himself on Sunday and it’s a far cry from the dominating displays that he was putting in at the start of the season. He should be left on the bench in the Europa League in midweek.

MF Lucas Biglia, 6 — One of two players to come away with any real praise. Not his finest performance, but looked like the only Milan player capable of making something happen. Kept the ball moving in midfield, but was given no real time or space to influence things in his usual way.

MF Giacomo Bonaventura, 5 — He had moments of joy as he tried to make something happen with a driving run or a clever bit of skill. Still not fully fit and clearly lacking a bit of sharpness, but for commitment at least, he deserves a decent mark.

MF Ricardo Rodriguez, 6 — Along with Biglia, he can come away with his chin up. Not a great performance, but he looked good in possession, was prepared to get stuck in and put in a shift for his teammates. Deserved better from elsewhere, but not much more could have been expected of him in the circumstances.

FW Suso, 5 — Failed to create anything of note and if he wants a prominent role in the team regardless of position, he has to step up in games like this and produce a bit of magic to help. We’ve seen it before from the Spaniard, but a lack of consistency continues to be an issue for him as he was anonymous and ineffective.

FW Nikola Kalinic, 5 — In his defence, the Croatian forward can’t be criticised too much as he was left isolated throughout and didn’t have the support he needs to feed off. Made a couple of clever runs down the channels but all too rare.

FW Patrick Cutrone, N/A — Should have been brought on earlier to raise the tempo and effort from the team as his energy up top can filter through to the others. Not enough time to make an impression.

MF Hakan Calhanoglu, N/A — Similarly to Cutrone, his creativity was needed much earlier and he shouldn’t have come on so late. Needs to start the next two games.

FW Fabio Borini, N/A — Put on as a makeshift right wing-back in place of Abate late on.