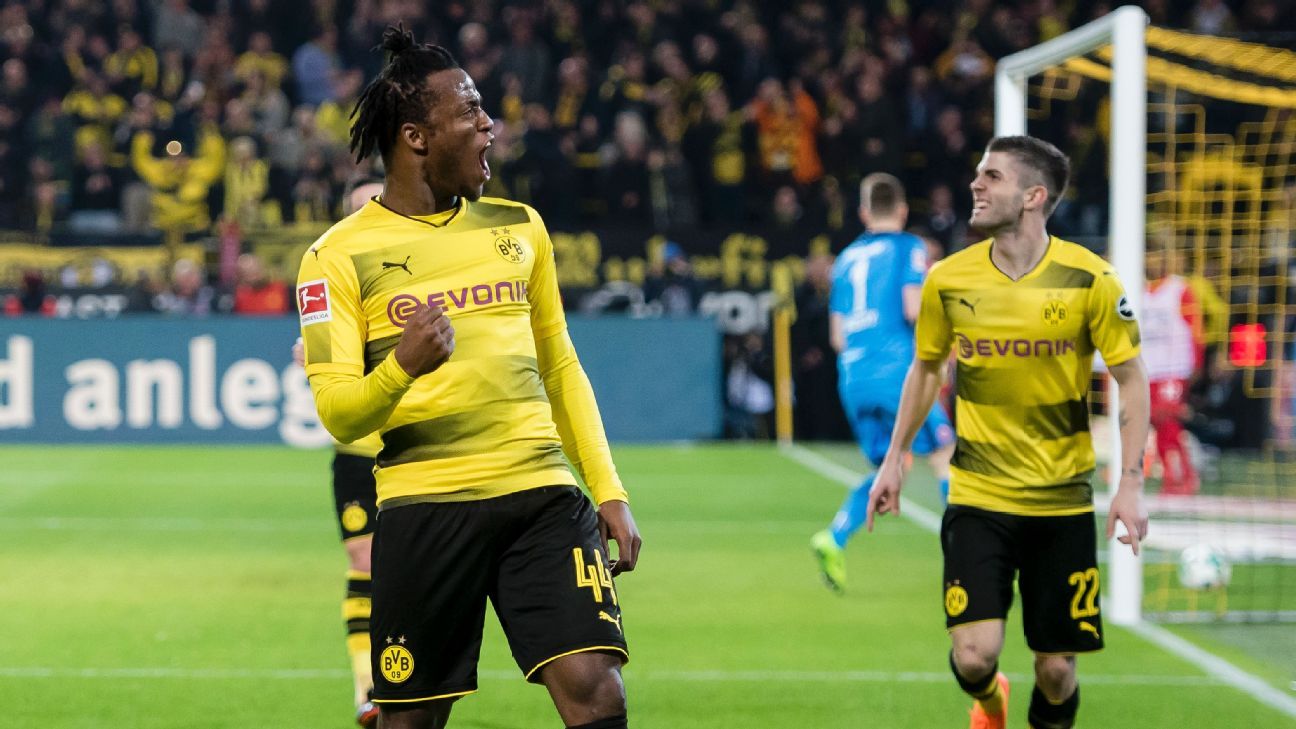 
Michy Batshuayi said he was delighted to help Borussia Dortmund take all three points at home after he scored a brace, including the last-gasp winner, as he came off the bench in the 3-2 win over Eintracht Frankfurt on Sunday night.

Having gone without a goal in five matches following his excellent start at Dortmund since arriving on loan from Chelsea, Batshuayi started on the bench for the first time.

Coming on for Maximilian Philipp after 62 minutes, Batshuayi rescued Dortmund’s three points, twice replying to Frankfurt’s equaliser within a few minutes. The Belgium international secured the win with a stunning effort in the last seconds of stoppage time after Danny Blum had pulled level for Frankfurt in the 91st minute.

“I am definitely relieved because I hadn’t scored in a while, and the team’s been going through a difficult phase,” Batshuayi said on Sky after the match. “I am pleased I could help the team because it was an important match against a strong team also competing for the Champions League spots.”

And the Belgium international admitted that because he had finally been starting in games, he lacked freshness in recent weeks.

“I wasn’t angry [about not starting],” he said. “The coach made this decision. And it was clever. I was not used to going 90 minutes all the time. That’s why I was happy. I was tired after the last games. And you could see that when I came on — I was fresh.”

The three points moved Dortmund back to third in the Bundesliga standings. Going into the final eight games of the season, they are now three points clear of Frankfurt in fifth and also have a superior goal difference.

Despite Dortmund’s patchy performances, they remain unbeaten in the domestic league under coach Peter Stoger, who is only under contract until the end of the season.

Borussia’s goal is to finish within the top four in Bundesliga and thus secure a return to Champions League in the 2018-19 season.

And, speaking to kicker, sporting director Michael Zorc has said that a decision over the new Dortmund coach has not been made.

“We’ll decide at an appropriate if and how we’ll continue with Stoger,” he said. “But that time has not come yet.”

The 28-year-old and Dortmund agreed on a new five-year deal until summer 2023, tying Reus to his hometown club until the age of 34. CEO Hans-Joachim Watzke hopes the Germany international will end his career at the Westfalenstadion.

Premier League agree to £250m EFL bailout package
Borussia Dortmund’s Haaland to miss rest of 2020 through injury
Man City, Mahrez too good for Burnley. Is this the win that gets Guardiola’s side going in Premier League?
Chelsea’s plot for Rice rests on Chilwell’s play
Man United’s breakthrough win; Real Madrid’s failure is on Zidane; why Napoli are Serie A contenders