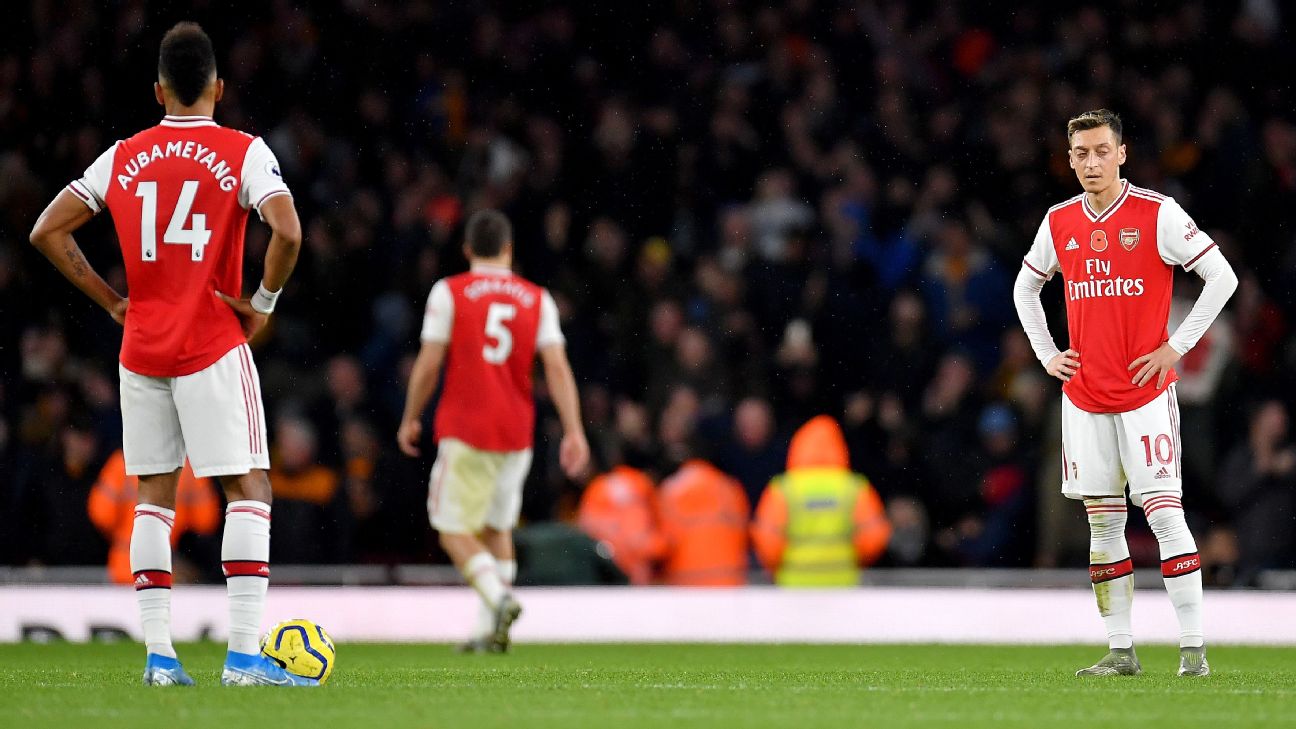 
Arsenal surrendered a lead at home for the second time in a week as they drew 1-1 with Wolves in the Premier League on Saturday.

Pierre-Emerick Aubameyang slotted home the opener after 21 minutes following good work from David Luiz and Alexandre Lacazette, before Raul Jimenez rose highest to head home a Joao Moutinho cross 15 minutes from time to crank up the pressure on Unai Emery.

Despite the late concession, the hosts looked much better from a defensive point of view than in last weekend’s 2-2 draw with Crystal Palace, especially from set pieces.

Emery won’t have been impressed with what was a slow start from his side, and Wolves will be disappointed that they didn’t carve out any meaningful chances in an opening 20 minutes they dominated.

6 — It wasn’t the most creative of displays from the Arsenal midfield, but Emery’s decision to start both Dani Ceballos and Mesut Ozil was met with a positive reception from the Emirates faithful, and the selection should deliver more excitement and craft if he keeps faith with it.

GK Bernd Leno, 6 — Got a strong right hand to a fizzing Matt Doherty shot just before half time, but couldn’t do anything about Jimenez’s header.

DF Calum Chambers, 5 — The former Southampton man looks much more comfortable in the opposition half rather than his own. The right-back got forward well and provided decently deliveries, but lost the vital aerial battle with Jiminez for the visitors’ equalizer.

DF David Luiz, 7 — The Brazilian played his part in the opener with a drilled cross into the penalty area for Lacazette, and looked solid throughout the 90.

DF Sokratis Papastathopoulos, 6 — A steady display for the first 75 minutes, but needs to take some flack after some poor positioning left him under Moutinho’s cross and unable to help Chambers deal with goalscorer Jimenez.

DF Kieran Tierney, 7 — The less adventurous of the home full backs, but the Scot was excellent defensively against the rapid Wolves winger Adama Traore. Replaced by Sead Kolasinac in the closing stages as he began to tire.

MF Matteo Guendouzi, 6 — A relatively quiet afternoon for the 20-year-old, who was playing in a deeper role to make way for the inclusion of Ozil, which meant we didn’t see much of the Frenchman in the final third until his side were chasing a winner in the closing stages.

MF Lucas Torreira, 6 — On another day the Uruguayan could have had a couple of goals in a first half that saw him fail to hit the target from two promising positions, and if he could improve his finishing he would be a big player for Arsenal. Replaced by Bukayo Saka for the final 18 minutes.

MF Dani Ceballos, 6 — The Real Madrid loanee grew into the game after a quiet opening half-hour and started showing for the ball and trying to make things happen, but failed to track back with Wolves midfielder Moutinho as he crossed for the leveler.

MF Mesut Ozil, 6 — His return to the Premier League fold was much less eventful than his excellent performance against Liverpool in the Carabao Cup in midweek. The German drifted in and out of the game and didn’t see enough of the ball to make a telling impact.

FW Alexandre Lacazette, 7 — Turned on a sixpence and played a perfectly weighted pass for his strike partner Aubameyang to stroke home the opener, and was a threat all day. Brought off for Gabriel Martinelli on the hour.

FW Pierre-Emerick Aubameyang, 7 — An excellent finish to open the scoring as he guided the ball into the bottom corner for his 50th goal in an Arsenal shirt, but was kept relatively quiet outside of that by a Wolves defence that shackled him well.

FW Gabriel Martinelli, 6 — Didn’t really get into the game as he slotted into a right-wing role to help deal with the visitors’ overlapping full backs.