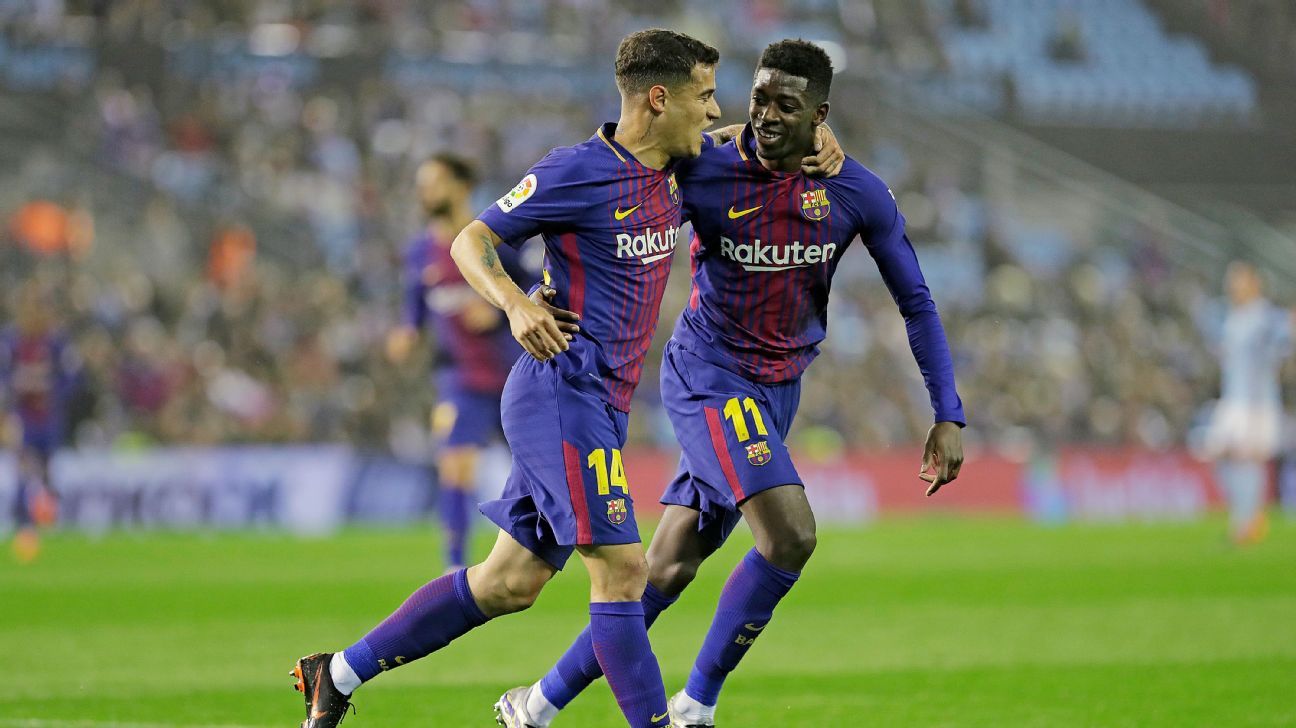 
Ernesto Valverde rung the changes at Celta Vigo on Tuesday as Barcelona clung on to a 2-2 draw.

It was a team selection which threw up a number of curiosities. For starters, there were eight changes from the side which beat Valencia at the weekend. Valverde, who has so often resisted the urge to rotate this season, effectively fielded a B team with Saturday’s Copa del Rey final against Sevilla in mind.

The first conclusion you might draw from that being a B team is: that’s an expensive B team. Over €500 million worth of players were on display. That figure is slightly distorted by the inclusion of record signings Coutinho and Dembele but Lucas Digne (€20m), Andre Gomes (€40m), Paulinho (€40m) and Paco Alcacer (€30m) didn’t come cheap. It’s a lot of money to spend on backup players who, Paulinho aside, have rarely been given a sniff this season.

However, it was the second conclusion which drew more ire in Catalonia. If this was a B team, where were the actual B team players? There were none. Not one player in the side had graduated from the club’s La Masia. Not one starter was from Catalonia. If this side suggested Barca have failed in the transfer market, then it also suggested they’re failing the academy.

The last time Barcelona fielded a side without an in-house player was 16 years ago when Carles Rexach was in charge. Since then, there’s always been a Victor Valdes or a Carles Puyol, a Xavi or an Iniesta … even a Marc Bartra or a Martin Montoya. But on Tuesday, there was no one.

Roberto Bonano: Born in the same town as Messi, the Argentine goalkeeper moved to Barcelona from River Plate to be their No.1 in 2001. By 2003, though, he had been replaced by Victor Valdes and he wound down his career with Real Murcia and Alaves.

Michael Reiziger: Part of the Dutch invasion at Camp Nou under Louis van Gaal, the right-back was, more or less, a regular for seven seasons between 1997 and 2004, when he left for Premier League side Middlesbrough.

Philippe Christanval: Barca gave Monaco almost €8m for the highly rated Christanval in 2001. The centre-back never quite justified the fee, though, returning to France with Marseille in 2003. He then moved to Fulham two years later.

Abelardo Fernandez: Still a fans’ favourite in Barcelona, Abelardo, who joined from Sporting Gijon, made over 200 appearances for the Catalan club between 1994 and 2002 before joining Alaves, where he retired a year later. The 47-year-old has since had success as a manager back at Sporting and is currently doing a grand job in charge of Alaves.

Francesco Coco: The Italian left-back spent most of his career on loan. Barca borrowed him from AC Milan for the 2001-02 campaign and he was then sold to Inter the following summer. His career also included loan spells with Vicenza, Torino, Livorno and Torino (again).

Phillip Cocu: The PSV Eindhoven coach was another part of the Van Gaal revolution. He made over 200 appearances for Barca and was a regular fixture in their midfield for six years before returning to PSV in 2004.

Fabio Rochemback: After joining Barca as a prodigious 20-year-old, the Brazilian never quite lived up to the hype. He scored a memorable goal in front of the Kop against Liverpool in the Champions League but left on loan for Sporting Lisbon in 2003 and then joined Middlesbrough permanently in 2005.

Luis Enrique: Wrote his name in Clasico folklore when he joined from Real Madrid in 1996. Spent eight years at Camp Nou and was one of the club’s best players in that period, playing in several different positions. Hung his boots up at Barca in 2004 and returned as B team boss four years later, eventually taking on the first team role in 2014. Won the treble in his first season at the helm and nine trophies in total before walking away from the job last summer.

Rivaldo: The brilliant Brazilian played for 15 clubs in his career but is probably best remembered for his five-year stint at Barcelona, which started 1997 when he signed from Deportivo La Coruna for around €30m. Won the FIFA World Player of the Year award and the Ballon d’Or in 1999. Released from his contract in 2002, he joined Milan, before going on to play in Greece, Turkey, Brazil and Angola.

Marc Overmars: Barca signed the Dutch winger from Arsenal along with Emmanuel Petit for a combined fee of €35m in 2000. Overmars did well in his first season but injuries affected him after that as Barca struggled to get their act together on the pitch. He quietly left in 2004 for Go Ahead Eagles in his homeland.

Javier Saviola: As a 19-year-old, Saviola joined Barcelona from River Plate for a fee of around €20m. Plenty of promise was displayed in his first three seasons at the club as he scored 17, 13 and 14 league goals respectively, but ultimately never fulfilled the lofty expectations placed upon him. Spent time on loan at Monaco and Sevilla before getting another crack of the whip at Camp Nou. It didn’t work out, though, and he made a surprise move to Real Madrid in 2007. Minutes were hard to come by at the Bernabeu and he left in 2009, going on to play for Benfica, Malaga, Olympiakos and Verona before returning to River.