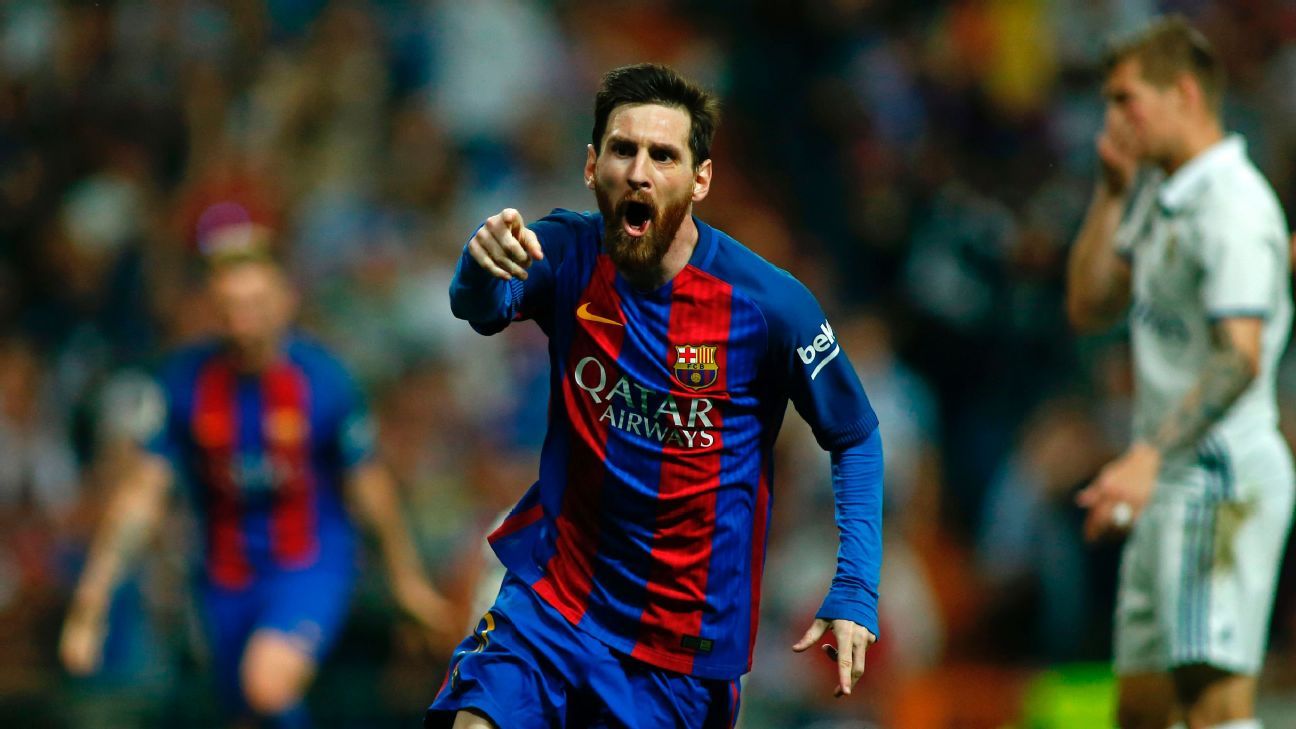 
Lionel Messi turns 30 Saturday. So here are 30 things about the Argentina and Barcelona legend.

1. Messi’s birthday isn’t the biggest thing happening to him this month: next week he will marry childhood sweetheart Antonella Roccuzzo in a ceremony in Rosario. All of his Barcelona teammates are invited.

2. The Barcelona star already has two children with Antonella: Thiago (4) and Mateo (1).

3. Like many modern-day footballers, Messi’s body has become increasingly adorned with tattoos. He has ink dedicated to his mother, his children and Jesus. Messi’s even had a go at being a tattoo artist himself, writing “10” on his own tattoo artist’s wrist.

4. Gerard Pique described teenage Messi as “introverted” and “mute” and to this day the Argentine isn’t known for doing a lot of talking in his mumbled, Argentine accent. He lives a quiet life outside of Barcelona in Castelldefels.

5. Luis Suarez, Cesc Fabregas and their respective partners are among Messi’s closest family friends. Suarez’s partner Sofia Balbi even opened a shoe store in Barcelona with Antonella in May and all three families spent time in Ibiza together this month.

6. Messi may have spent more than half of his life in Catalonia, but he hasn’t lost the taste for his home comforts. Dulce de leche (a creamy caramel sauce) and mate (a South American caffeine-rich infused drink) remain among his guilty pleasures, although he’s said to have gotten over his milanesa (breaded meat fillet) addiction.

7. Cuccittini is Messi’s mother’s maiden name and he has Italian roots on both sides of the family.

8. Messi and his father, Jorge, were both found guilty of three counts of tax fraud totaling $4.7 million last year. It was judged they had used tax havens to avoid paying taxes on earnings from image rights between 2007 and 2009.

9. In a sign, perhaps, that he is preparing himself for life after football, Messi’s reported to have bought a hotel in Sitges, on the Catalan coast, for €30 million earlier this year.

10. Born in Rosario, Messi was playing for Newell’s Old Boys when he sacrificed everything to move to Europe and sign for Barca as a teenager — he’s suggested he may retire back at Newell’s.

11. Messi’s first “contract” with Barca was famously written up hastily on a napkin, with the club also paying for his treatment after he had been diagnosed with a growth hormone disorder. Money more than well spent.

12. Almost 13 years have passed since Messi made his league debut for Barca against rivals Espanyol at the Olympic stadium. And earlier this year marked 12 years since his first goal, that lovely lofted finish against Albacete which started everything.

13. No player has scored more El Clasico goals than Messi (23) — his most recent bringing that brilliant celebration at the Bernabeu in April.

17. No player has scored more goals for Argentina than Messi (58 and counting).

18. Messi is the youngest Argentina player to have scored at a World Cup, aged 18 years and 357 days old when he netted against Serbia and Montenegro in 2006.

20. Argentina President Mauricio Macri begged Messi to reconsider his decision when he retired from international football in 2016. There were also marches in Buenos Aires, and the metro stations in the Argentine capital all carried the phrase “Leo, don’t go.” He eventually reversed his decision.

21. Messi is Barcelona’s all-time leading goal scorer by some distance now, with 507.

22. With five Ballon d’Ors, Messi has been named the best player in the world more times than anyone. He’s been in the top three for 10 consecutive years, too, and is the youngest player to win it three times at 24 years, 6 months and 17 days.

25. It was revealed recently that a Messi theme park will open in China in 2019.

26. Murals of Messi around the world regularly garner huge media attention — this being the most recent.

27. With superlatives running out to describe Messi, a new word was added to the Spanish dictionary: Inmessionante; 1) the perfect way to play football, an unlimited ability to self-improve; 2) describes the best player of all time.

28. So far and wide is Messi’s reach that an Afghan child went viral when an image emerged of him wearing an Argentina shirt made out of a carrier bag with Messi’s name on the back. The youngster eventually had the chance to meet the Barca man in Qatar, where the Catalan side were playing a friendly against Al-Ahli.

29. Director Alex de la Iglesia and Warner Bros. combined to make a film about Messi and his life in 2014.

30. Messi’s not a huge user of social media but he has a huge following. He doesn’t have a Twitter account but does use Facebook, where he has 88,875,489 likes, and Instagram, where he has 74.3m followers.