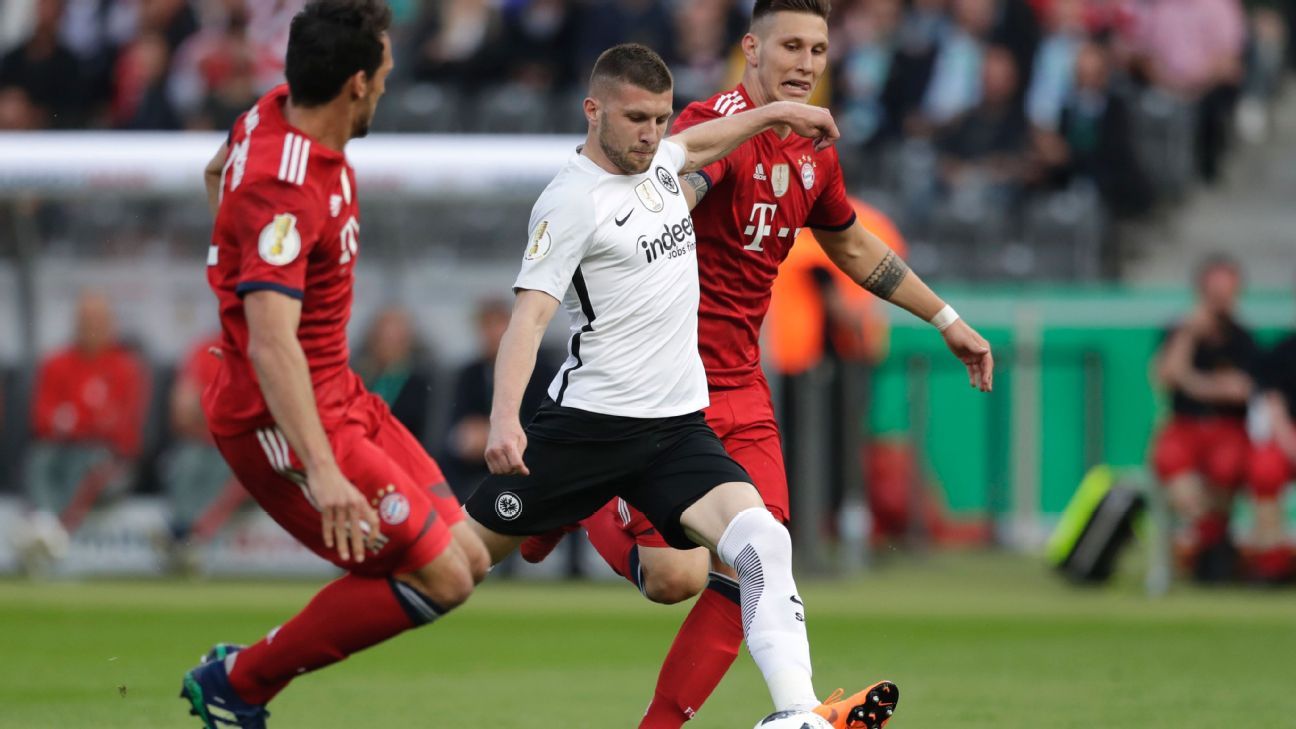 
Bayern Munich slumped to a dramatic 3-1 loss to Niko Kovac’s Eintracht Frankfurt in the DFB Pokal final in Berlin on Saturday.

Ante Rebic scored in each half for the unfancied Eagles, sandwiched between a Robert Lewandowski equaliser on 53 minutes, before substitute Mijat Gacinovic sealed a shock cup success with the last kick of game on the break.

Regardless of the loss, Bayern will be celebrating their campaign in Marienplatz on Sunday afternoon in Munich and there’s FREE beer. That, and Bayern captain Manuel Neuer is fit again after over eight months out and will able to play for Germany at the World Cup in Russia.

Bayern saw their treble hopes evaporate after an agonising loss to Real Madrid in the Champions League semifinals and followed up by failing to seal their 12th domestic double. After losing only their fourth final in 22 appearances, Bayern ended up with just a solitary trophy in a season that promised so much a few weeks ago.

After receiving their runners-up medals, the massed Bayern ranks fled immediately to the dressing room and didn’t bother hanging around to watch Frankfurt pick up the cup. In fact, only substitute goalkeeper Neuer stayed around for the ceremony. No matter how you paint it, that’s a serious lack of respect. Poor show from a club who pride themselves on fair play and sportsmanship.

6 — On the sixth anniversary of Bayern’s defeat to Chelsea in the 2012 Champions League final at the Allianz Arena, Jupp Heynckes suffered another disappointing defeat against his former employer, where he was sacked in 1995 after falling out with a host of Frankfurt stars.

GK Sven Ulreich, 5 — Couldn’t do anything to prevent any of the goals but hardly a reassuring presence at the back, especially with his weak kicking.

DF David Alaba, 6 — Fleetingly brief moments of promise on the left flank but nothing of lasting note.

DF Mats Hummels, 5 — In an odd moment, Hummels declined to take over the captaincy when Thomas Muller was hooked off. He soon rattled the crossbar with a firm header on 80 minutes, before Rebic ran rampant again. However, we have to ask why Hummels would turn down the opportunity to captain the side.

DF Niklas Sule, 5 — The Frankfurt-born defender was outstripped for pace for the opening goal but repaired the damage by playing in Joshua Kimmich to provide the equaliser. He and Hummels are far from the quickest and Bayern desperately miss the injured rock Jerome Boateng at the back.

DF Joshua Kimmich, 6 — Went agonisingly close with a glancing header midway through the first half, before laying the equaliser on a plate for Lewandowski. It’s his 15th in all competitions, the highest number for any defender in Europe’s top five leagues. No matter how brilliant he is going forward though, he doesn’t always exude confidence when asked to do the basics in defence.

MF Javi Martinez, 6 — Denied a potentially game-changing penalty at the death after a clear foul by Kevin-Prince Boateng, but, all in all, not the powerful driving force he usually is under Heynckes.

MF Thiago, 7 — After a lethargic opening period, Thiago improved remarkably in the second half and it was a surprise when he was taken off just after the hour mark. The Spain international gestured angrily to Heynckes as he left the pitch that he wasn’t happy at being substituted, but after calming down soon applied an ice pack to his knee.

MF James Rodriguez, 5 — The Colombia star gave the ball away cheaply for both of Frankfurt’s first two goals and looked off the pace on a frustrating night in the German capital.

MF Franck Ribery, 5 — Appearing in a record-equalling seventh final, Ribery was never a factor, despite having the honour of assuming the captaincy on 70 minutes after Hummels’ rebuff. Did well to stay on the pitch for 87 minutes before making way for Wagner.

MF Thomas Muller, 5 — Should have done better with a chance to equalise in the first half but the opportunity went begging after Muller connected more with his shoulder rather than his head. Impressive goalkeeper Lukas Hradecky snuffed out the danger with a routine save on 32 minutes, before the ineffective Muller was hooked for the returning Kingsley Coman with 20 minutes of normal time remaining.

FW Robert Lewandowski, 6 — After reclaiming free kick duties, Lewandowski rattled the crossbar with a powerful strike after only eight minutes, before poking narrowly wide across the face of goal later in the first half. His equaliser took a slight deflection off Omar Mascarell but it took him to four DFB Cup final goals, levelling with German legends Uwe Seeler and Gerd Muller after thronking a treble for Dortmund in 2012. He was booked for a supposed elbow on Japan’s Makoto Hasebe and could so easily have fired Bayern ahead on 75 minutes, but his effort went agonisingly the wrong side of the post.

MF Corentin Tolisso, 5 — Replaced Thiago on 64 minutes and took a heavy touch when well placed to put Bayern ahead five minutes after his introduction as a substitute.

MF Kingsley Coman, 5 — The French youngster replaced Muller with 20 minutes remaining but never got into the game on his return after almost three months out through injury. He only caught the eye with a hefty bodycheck on Boateng and the inevitable yellow card.

FW Sandro Wagner, N/R — Surprisingly left out of the Germany World Cup squad, Wagner hardly got a chance to show the watching Joachim Low what he is capable of during his brief cameo.