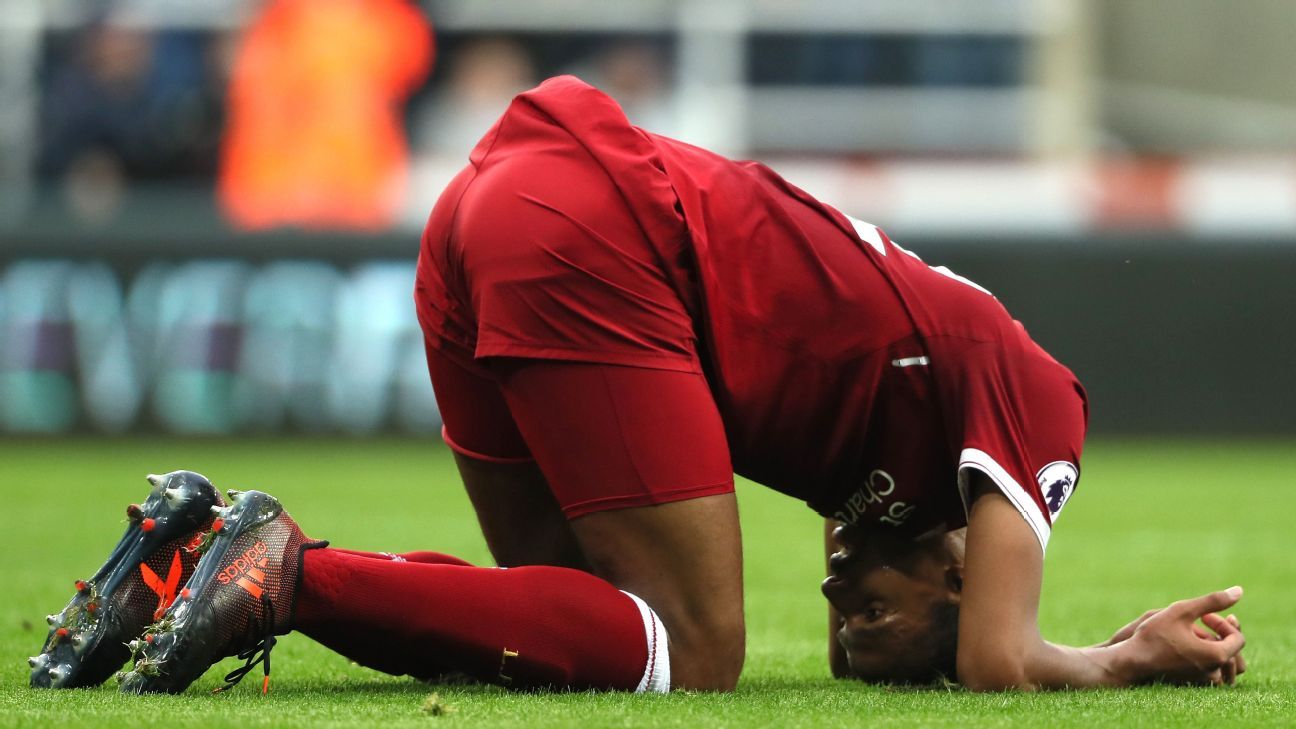 
Typical Liverpool. The Reds dominated but didn’t take their chances and handed the opposition a goal out of nothing with a schoolboy error at the back, settling for a 1-1 draw. It’s happening far too often. There’s no way Liverpool should have come away from St James’ Park with anything less than three points, but as usual, they found a way to shoot themselves in the foot.

None. There is no consolation to be had in being the better side because, with all due respect, Newcastle aren’t very good. Every week Liverpool play well and dominate the opposition only for the same failings to undermine all the good in their play.

Take your pick between the continuing wastefulness of the forwards and the now customary defensive howler, this time by Joel Matip, who let in Joselu for Newcastle’s equaliser in embarrassing fashion.

6 — There’s actually very little Jurgen Klopp can do about what is happening to his side at the moment. Liverpool are playing well and dominating games, so he is obviously doing something right, but he can’t put the ball in the net for his forwards or prevent his defenders from making costly schoolboy errors. There was little to quibble about with the starting 11 or the substitutions, although perhaps the changes could have been made sooner.

GK Simon Mignolet, 6 — Another one of those incredibly frustrating days for the Belgian where he had virtually nothing of note to do yet still found himself picking the ball out of his net. He had no chance with the goal and was otherwise rarely called upon.

DF Joe Gomez, 5 — Battled hard but found it difficult at both ends. His delivery in the final third isn’t really up to scratch while too often this season he’s been beaten far too easily by a winger and had to pull him back by his shirt. He escaped punishment this time as Christian Atsu got away from him and the official played the advantage. Just as well really, as he was booked soon after for a high boot.

DF Joel Matip, 4 — Caught out in amateurish fashion for Newcastle’s goal when he allowed Joselu to run clear through the centre. He did well to get back and make a tackle, but the ball ricocheted off the front man and into the net.

DF Dejan Lovren, 5 — Less culpable than others for the result but didn’t exactly inspire confidence. It was an eventful day for the Croatian, who should have done better with a first-half opportunity, had a couple of good penalty shouts turned down when his shirt was pulled and then conceded a stupid free kick in stoppage time that could have proved costly. Also made a crucial block, perhaps with his arm, to deny Newcastle a last-gasp winner.

DF Alberto Moreno, 6 — Mostly fine defensively but his delivery in attacking areas wasn’t up to par.

MF Jordan Henderson, 5 — Didn’t do much wrong but it was just a fairly nondescript performance from the captain.

MF Georginio Wijnaldum, 5 — Hit the post in the first half. Otherwise mostly invisible for long spells.

MF Philippe Coutinho, 7 — After a quiet start he burst into life with a stunning goal. It should have been the platform for a comfortable win and it was through no fault of the Brazilian that the team were unable to build on it. He wasn’t at his brilliant best but still he showed far more quality than those around him.

FW Sadio Mane, 5 — This was the Senegalese’s least effective outing in some time. He didn’t look sharp and made very little impression on the game.

FW Daniel Sturridge, 4 — Given a rare start but failed to grasp the opportunity. Liverpool have kept patience with Sturridge through all of his injury problems because he’s a goalscorer and the best finisher at the club. He missed a clear opportunity in midweek against Spartak Moscow and failed to take an even easier one in this game when he shot straight at the goalkeeper. Has to do better.

FW Mohamed Salah, 5 — Lively in the opening stages and produced one tremendous defence-splitting pass for Mane. That was as good as it got unfortunately. Heavy touches at crucial times robbed him of goalscoring opportunities and he also blazed over after following up a Sturridge effort that had come back off the keeper.

FW Dominic Solanke, NR — Brought on at the same time as Firmino, he looked strong and sharp and flashed a header just wide.