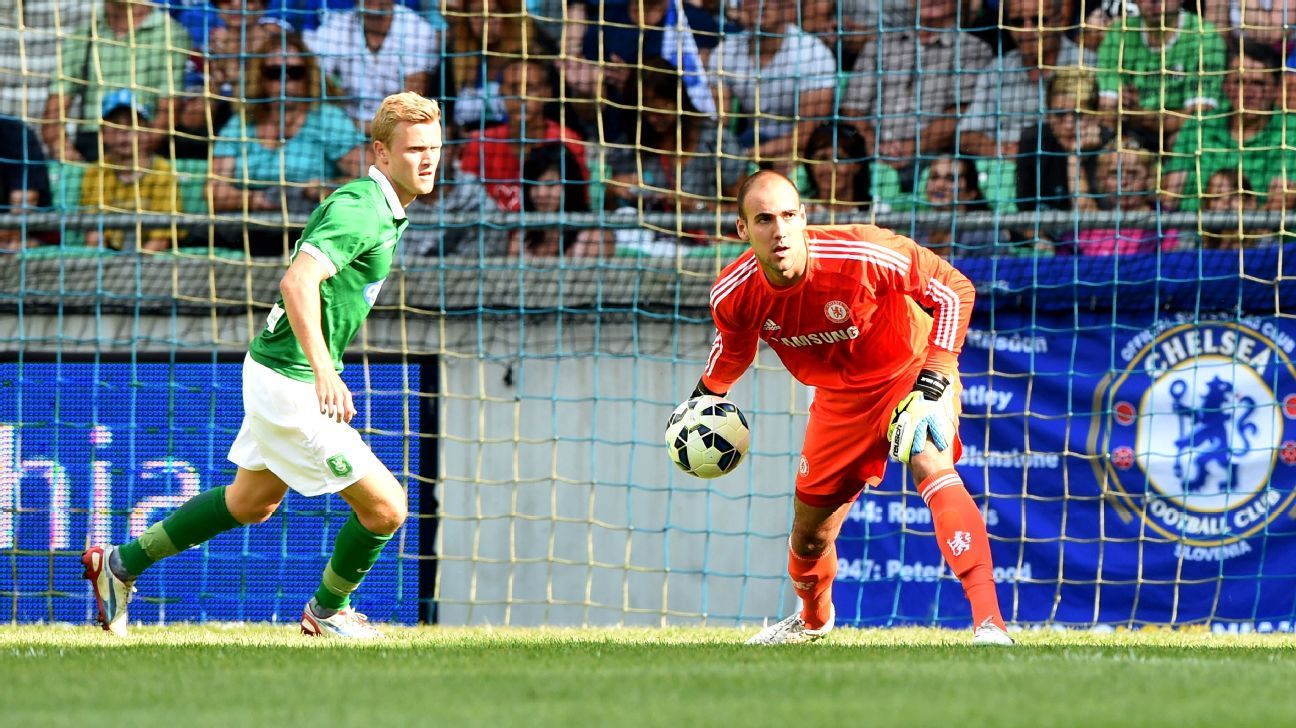 
Matej Delac became Chelsea’s longest-serving player when John Terry left earlier this summer, but he won’t stay for much longer.

The 24-year-old Croatian goalkeeper, who joined the Blues in 2010 but has never played for the club in an official game, is expecting to move on in the coming weeks.

“I have one year left on my contract, and there is no chance of getting a work permit. Therefore, Chelsea will sell me,” he told ESPN FC in an exclusive interview.

Inability to get a work permit in the United Kingdom stood between Delac and fulfilling his aspirations.

“I have always dreamt of playing in England, even before Chelsea called. We knew that there might be problems with the issue when signing the contract in 2010, but the situation was different. I had a good season at Inter Zapresic, Slaven Bilic called me up for the national team when I was 17, and there were hopes that I would get the necessary caps to meet the work permit criteria,” Delac says.

“The reality was different. I got injured for three months, lost my place in the national team squad, and that was it.”

And thus he started an intriguing journey around Europe. The keeper has spent time at eight different clubs in nine loan spells throughout the years, with varying results.

The first stop was Vitesse Arnhem during the 2010-11 season.

“They had just released Piet Velthuizen, and I was told there was a chance to fight for my place. However, there were problems with my Dutch visa, and I joined the squad after the season had started. Eloy Room played well between the posts, and the coaches didn’t want to make changes. I spent the entire year on the bench without playing a single minute,” Delac says.

There were a lot of positives, though.

“Working with the goalkeeping coach Raimond van der Gouw was a great experience. He helped me a lot with advice on football and personal life. The coach, Albert Ferrer, tried to play possession football, and it was interesting to work with him. It was a good first year out of my country, but I wanted to play and had to move on.”

The summer of 2011 was rather dramatic.

“I played at the Under-20 World Cup in Colombia and only returned to Chelsea in mid-August. There were negotiations with Zulte Waregem, and I was supposed to go there, but something happened at the very last moment, and the deal was off. The transfer window was about to close, and I had nowhere to play,” Delac recalls.

That’s when Petr Cech came to the rescue.

“Petr helped me to find a club through his agency. They contacted Karel Poborsky, who was the chairman at Ceske Budejovice. The window in the Czech Republic closed later than in other leagues, and I was able to be loaned out in September. However, the papers were not ready on time, and another goalkeeper proved himself. I spent another season on the bench, and only was given one chance against Viktoria Plzen who had a very strong team. We lost 4-0, and even though I made some good saves it’s impossible for a goalkeeper to get good press after such a result.”

Delac hoped to change his luck at Vitoria Guimaraes in 2012, but was left disappointed.

“It is an amazing club. The training center was exceptional, and the fans were fantastic. The coach Rui Vitoria, who now works at Benfica, was very impressive, but the only problem was that he chose another goalkeeper. That is why I left Portugal in the middle of the season,” Delac remembers.

Crossing the border with Kezman

At a difficult time, the keeper got a call from the coach who gave him his first chance.

“Borimir Perkovic asked me to join Inter Zapresic [in Croatia] who were fighting against relegation. I needed to start somewhere, and that was a good opportunity. Finally, I was getting playing time, and we had some good games, but the gap was too big and we went down on the last day. I could have probably stayed there if we had made it, but going to the second division wasn’t an option, and I moved again,” Delac says.

He joined Vojvodina Novi Sad in Serbia in the summer of 2013. For a Croat born in Bosnia, that is not the most natural move, but another former Chelsea player was hugely instrumental.

“Mateja Kezman was the director at Vojvodina, and Chelsea arranged the deal thanks to him. He called me, explained the project and said the club are going to play in Europa League qualifiers. I was very young during the war, so I didn’t really have strong feelings against Serbia. It turned out to be a good experience, and I played six games in Europa League. We were very unlucky to miss out on the group stage qualification,” Delac recalls.

However, the stay was cut short prematurely.

“The board changed in the middle of the season. Kezman left, the coach had to leave as well, and the new directors wanted to get rid of a lot of players. It is very easy to terminate a loan deal, and I knew that I have no chance to play anyway.”

Signing for Vincent Tan in Bosnia

“I returned to London, and got a call from Sarajevo. They had a good team — Robert Jarni was the coach, and the club was purchased by Cardiff City owner Vincent Tan. The infrastracture was good, and there are a lot of fans. I decided it was a good opportunity to get playing time in the spring. I took part in seven matches, but then Jarni left, and I was told the coach wanted to try a new goalkeeper ahead of the next season, because I was going to leave anyway,” Delac says, highlighting the difficulties of being a loanee.

And so he was back to London in the summer of 2014, and played 45 minutes in a friendly against Olimpija Ljubljana — his first and only game for Chelsea. Finding a new club proved to be difficult again, and the deal was signed on the last day of the transfer window — Delac was off to Arles Avignon in the French Ligue 2.

“It sounded like a good project with big names like Jonathan Zebina, Mamadou Niang and Pascal Chimbonda. However, we struggled mightily, and the coach had to leave. The new coach, Victor Zvunka, decided to change the goalkeeper, and there was a lot of uncertainty. That is why it was the best idea to leave in midseason.”

First title at Sarajevo and good season in Belgium

Another move to Sarajevo became an option in the beginning of 2015.

“Chelsea were not happy with it because they didn’t like the way I was treated previously, but I told them that I wanted to come back. That was a great decision because I kept 11 clean sheets in 14 matches, and we won the championship title in Bosnia. I was an amazing feeling,” Delac says.

For the first time in his career, he didn’t change clubs in the summer that year, though even that didn’t go smoothly.

“The new loan agreement with Sarajevo wasn’t reached in time for me to play in the Champions League qualifiers,” Delac explains. Then, just as continuity appeared possible, he tore anterior cruciate ligaments in his knee during a friendly.

“It happened three minutes before the break, and the second half was cancelled because of rain. That was really tough luck,” the keeper recalls.

The recovery went faster than expected, though, thanks to Chelsea’s medical staff.

“I returned to London for operations, and the club took care of everything. I am extremely grateful for that. I came back after six months and even played three games in May,” Delac says.

And so to the last loan spell during the 2016-17 season, at Mouscron in Belgium.

“I was told that I would have a chance to fight for my place, and that was right. We won 3-1 on my debut at Westerlo in September, and I stayed between the posts, playing 28 league matches.

“This probably was my best season so far, and the team achieved the target of staying up.”

Delac has never asked to leave Chelsea and is satisfied with his choice to sign for them.

“I have absolutely no regrets. I am proud to have been part of such a great club, and that is the way I have always felt, even though I didn’t get a chance to play for Chelsea. This club cares about players who are out on loan. We come to London every summer, and there are special coaches who work with out team — Eddie Newton and Paulo Ferreira. Chelsea constantly followed my progress and went to see my games. They visited six or seven Mouscron games last season,” Delac says.

“I was lucky to work under great coaches — Carlo Ancelotti, Andre Villas Boas, Jose Mourinho. I feel privileged to have trained with Cech, who is not only a phenomenal goalkeeper but a great person too.”

Time to move on and find the right club

“Signing players and loaning them out is a good project by Chelsea. We, the loanees, have our own Whatsapp group to get updates, even though it is not easy to become close friends when you rarely see each other face to face. I mostly stayed in touch with Jamal Blackman because he is a goalkeeper, and Mario Pasalic because he is a Croat.

“The problem with the work permit is a political one. I have been waiting for a decision to allow Croats to work in England without it, but it never happened. Now it’s time to move on. I would be glad to settle somewhere permanently and develop my career. It is important to choose the right club and make the correct decision. Then, maybe one day I will be able to return to England.”