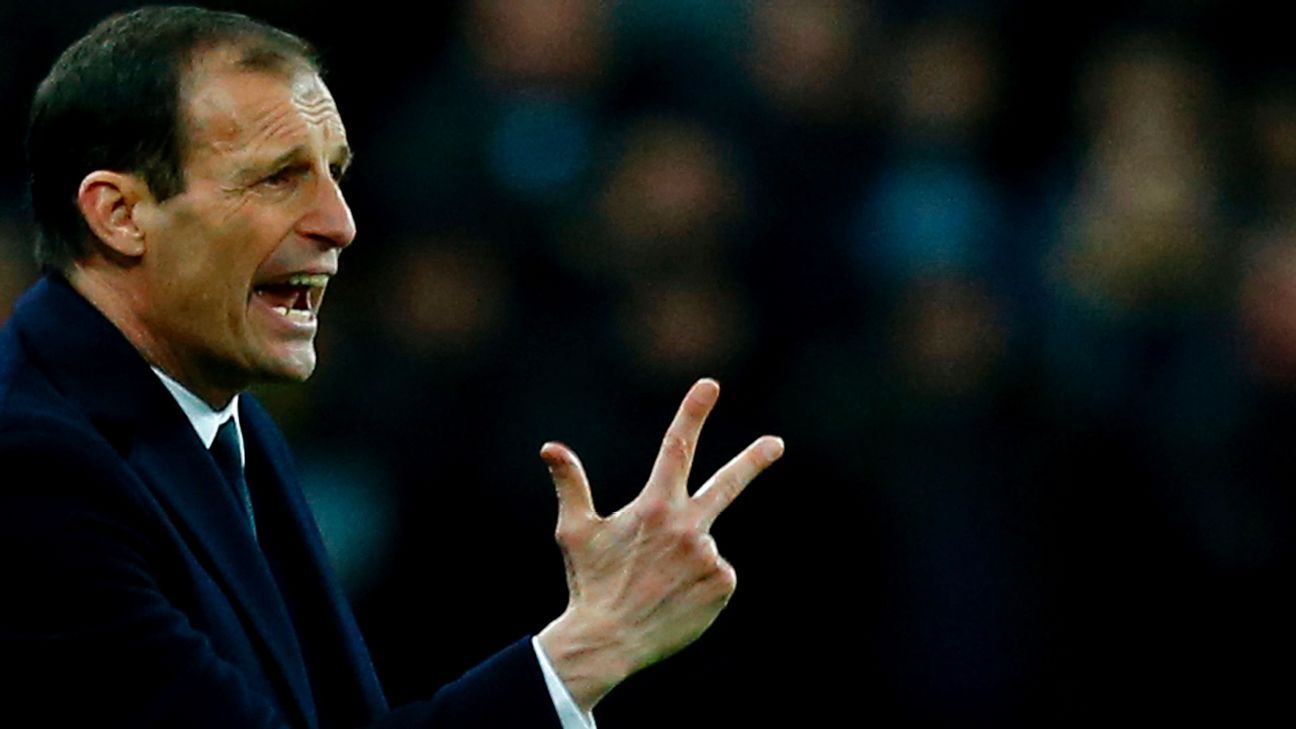 
Juventus coach Massimiliano Allegri is still annoyed by his side’s 2-1 Champions League defeat to Manchester United ahead of a trip to AC Milan this Sunday.

Juve threw away a 1-0 lead on Wednesday and Allegri has called on his side to show more intelligence in matches.

“We’re not closing games off and when they remain open until the 90th minute then you’re at risk,” he said. “On Wednesday, we didn’t realise when it was time to close up and we let our emotions get the better of us.

“At certain times, you just need to be intelligent. If you can’t win a game anymore, then you need to settle for not losing it. Everybody’s happy anyway that we played well, but in the end we didn’t win it and this annoys me a lot because winning makes the difference.

“We’d not lost since April and we were not used to it, but maybe it’s the most tolerable defeat we could have, in view of how our Champions League group is. It’s a psychological thing — the more you get good results, the more positive you are and the lower your attention drops.”

Allegri welcomes Mario Mandzukic back after he was rested in midweek, and he could feature alongside Cristiano Ronaldo — the “best centre forward in the world who does not play like a centre forward,” according to Allegri.

Gattuso’s position as Milan coach continues to be under scrutiny, in spite of a run of three straight Serie A victories which have catapulted the Rossoneri into fourth place, 10 points behind the Bianconeri.

Allegri, who knows all about the pressures and expectations at Milan, having spent three and a half seasons in the Red and Black hotseat — winning the title in 2011 — believes his former club are in good hands with Gattuso.

“He’s become a great coach,” Allegri said. “It doesn’t surprise me at all. He’s always been enterprising and he’s improved on and off the field and he transmits Milan’s DNA, which he has within him, because it’s not easy to be on that bench.”

Meanwhile, Gattuso admitted that Juve “are much better than we are,” but vowed his side would “battle them” for three points, and at the end of the game he could not rule out cupping his ear in the style of Jose Mourinho.

“I’ve done much worse in my career, so I can’t judge,” he said. “Everybody has his own character and [Inter coach Luciano] Spalletti said it well when he said that when the lion is sleeping, you must leave it be.

“We’ve all been offended in our careers and you can either react or choose not to, but to hear insults for 90 minutes is certainly not great.”

That could be what Juve defender Leonardo Bonucci — the first Juve player to confront Mourinho about his actions in Turin — may have to cope with on his return to Milan.

He spent just a season with the Rossoneri before returning to Juve in the summer, much to the disappointment of many Milan fans, whom Gattuso says should not be angry.

“Leo gave us a lot professionally and technically,” Gattuso said. “If I’ve improved myself in terms of my character it is also thanks to him. Whenever I was wound up, he was always the one who made me see reason.

“It’s hard to judge his choices. I respect what he has done and it was an honour to coach him, and I hope he will be remembered for what he gave us.”