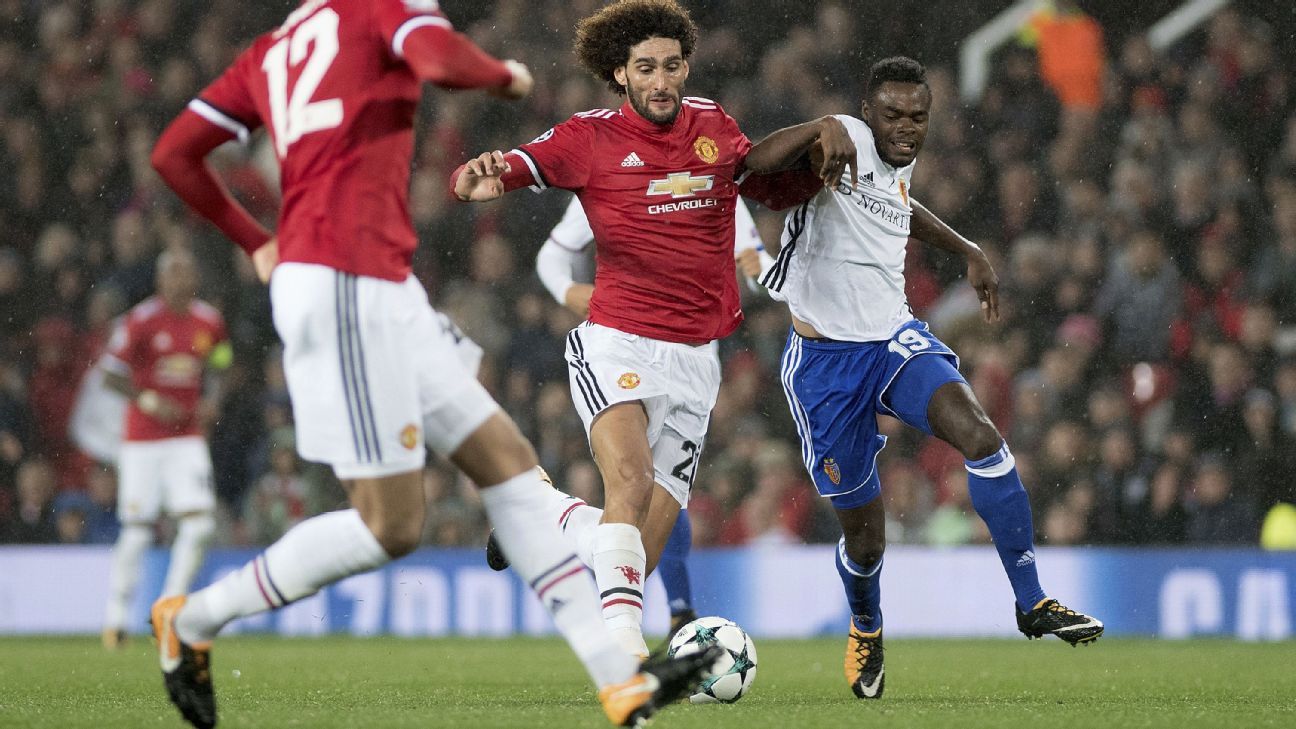 
Marouane Fellaini replaced the injured Paul Pogba in the first half of Manchester United’s game vs. Basel on Tuesday and went on to be named Man of the Match in a 3-0 win. Having returned to the squad after missing the 2-2 draw at Stoke with injury, Fellaini — a player who Jose Mourinho has repeatedly insisted is very important — scored the opening goal in this Champions League fixture.

His chant, sung to the tune of “Do The Conga” by Black Lace, made several outings, as it has done increasingly at Old Trafford and in away games this season. Once sung largely sarcastically, given this is a player who has received his fair share of boos in the past, it now appears as though the Belgian midfielder may be starting to win fans over.

Fellaini has featured in 138 games since signing in 2013 and it’s hard to recall a player who has played as badly as he has, as regularly as he has, reaching that sort of appearance tally, yet here he is at the start of his fifth season and, dare I say it, he’s actually playing well.

He has mainly been deployed as a substitute this season and, unlike his nightmare appearance off the bench at Goodison Park last year when he cost United a win vs. Everon, his introduction has often coincided with the team turning their game around.

On the opening day of the league season, United were 2-0 up against West Ham before his 76th-minute introduction and went on to win 4-0. They were 1-0 up to Swansea before he was brought on with 15 minutes to go; the game ended 4-0. Against Leicester, it was 1-0 and finished 2-0 thanks to his goal. Then came Tuesday’s impact.

Fellaini shouldn’t be credited with these wins all by himself, but at the very least it shows his performances aren’t having a negative impact. At best, it suggests that having a bit more grit in midfield to free up the forwards, as well as a player to aim and give opposition defences something else to think about, is having a positive effect.

After dropping points against Stoke, Mourinho claimed that it was a “game for Fellaini” and that United would have been more dominant from set pieces had he been on the field. Following the win against Basel, United’s manager insisted that Fellaini had again shown his importance to the team.

Mourinho loves anyone who will follow instructions and put the team first. Loyal players, who are committed to him, are what he depends upon. That is the relationship he has with Nemanja Matic and the reason why the manager was so keen to bring the midfielder in from Chelsea.

“He’s trying to give absolutely everything to me, to the team and to the club,” Mourinho said of Fellaini after the Basel game. “I couldn’t be more pleased with him.”

Fellaini was hopeless under David Moyes and not much better for Louis van Gaal, but he’s found a new lease of life under Mourinho. He’s being used as he should have been all along, a useful squad player who provides a different option from the bench, and United are reaping the benefits.

Not all supporters are convinced and it certainly takes more than a handful of good games to wipe the memory of seasons of poor displays, yet the added competition for places thanks to Matic’s arrival, as well as the arm around the shoulder from Mourinho, have certainly triggered a huge improvement in Fellaini’s game.