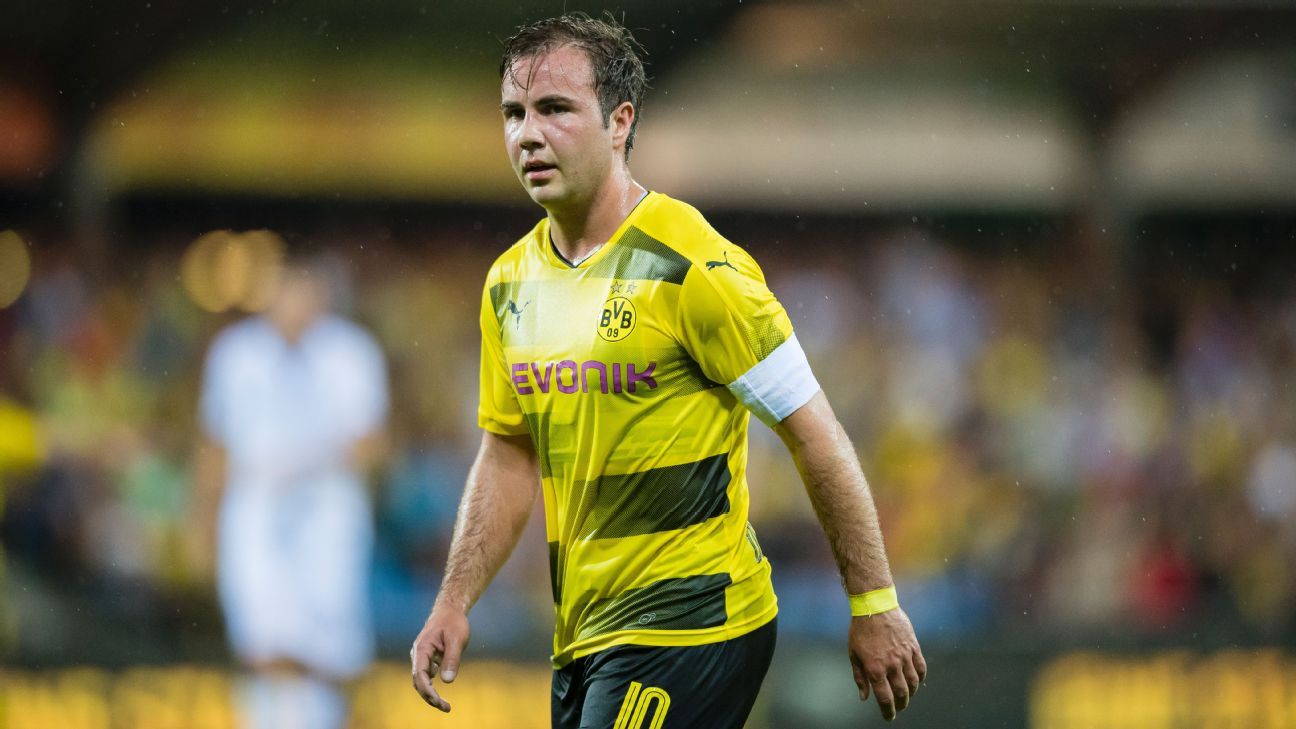 
Mario Gotze played for an hour as Borussia Dortmund suffered a 1-0 friendly defeat against Atalanta in their final friendly ahead of the German Super Cup against Bayern Munich.

Having lost 1-0 to Espanyol on Friday, Dortmund again failed to score as they went down to defeat courtesy of Josip Ilicic’s second-half strike.

In the absence of a number of key players including Pierre-Emerick Aubameyang and Marc Bartra, Dortmund coach Peter Bosz fielded new signings Mo Dahoud and Maximilian Philipp against Atalanta and handed the captain’s armband to Mario Gotze, who was one of only three players — alongside Dahoud and goalkeeper Roma Burki — to have featured against Espanyol.

Gotze, who is rebuilding his fitness after a five-month absence last season, called the result “a bit unfortunate” but is pleased with his progress.

“I feel really good,” he told BVB’s in-house TV channel. “I completed nearly every training session for the past three-and-a-half weeks, took part in the matches.

“That’s important for me, and for my physical fitness too. I’m looking forward to what is coming now and I am happy that it gets better every day.”

Gotze is confident the team will show improvement against Bayern at the weekend as well.

“We are in good shape, we are looking forward to the match and we should not forget we are playing at home,” he said. “We want to put in a super performance.”

Turkey international Emre Mor, 20, did not feature in the friendly against Atalanta and could leave Dortmund only year after joining the Bundesliga side from Nordsjaelland.

Recent reports in Italy linked the midfielder with a €13 million switch to Fiorentina, and, speaking to kicker, BVB sporting director Michael Zorc did not rule out a transfer.

“Many clubs are interested in Emre Mor,” Zorc said, although he refused “to join in with the speculation” when asked about Fiorentina’s interest in particular.

In an interview with dpa, meanwhile, Dortmund CEO Hans-Joachim Watzke has said that BVB’s biggest and “immensely difficult” challenge in Europe will be keeping big-spending clubs like Manchester United, Manchester City or Liverpool at bay.

BVB are currently seventh in the UEFA ranking, but Watzke said it will be an uphill task to battle against the Premier League clubs currently behind them.

“They are all on the fast track going 280 kilometres per hour and continuously flashing us, trying to push us aside,” Watzke said.

He added that, “in all modesty,” Dortmund have “every right” to view themselves as second only to Bayern Munich in the Bundesliga.

“We have established a position in Germany that makes it very hard for other clubs to attack us sustainably both in terms of economics and general appeal, at least without big spending from the outside,” Watzke said.