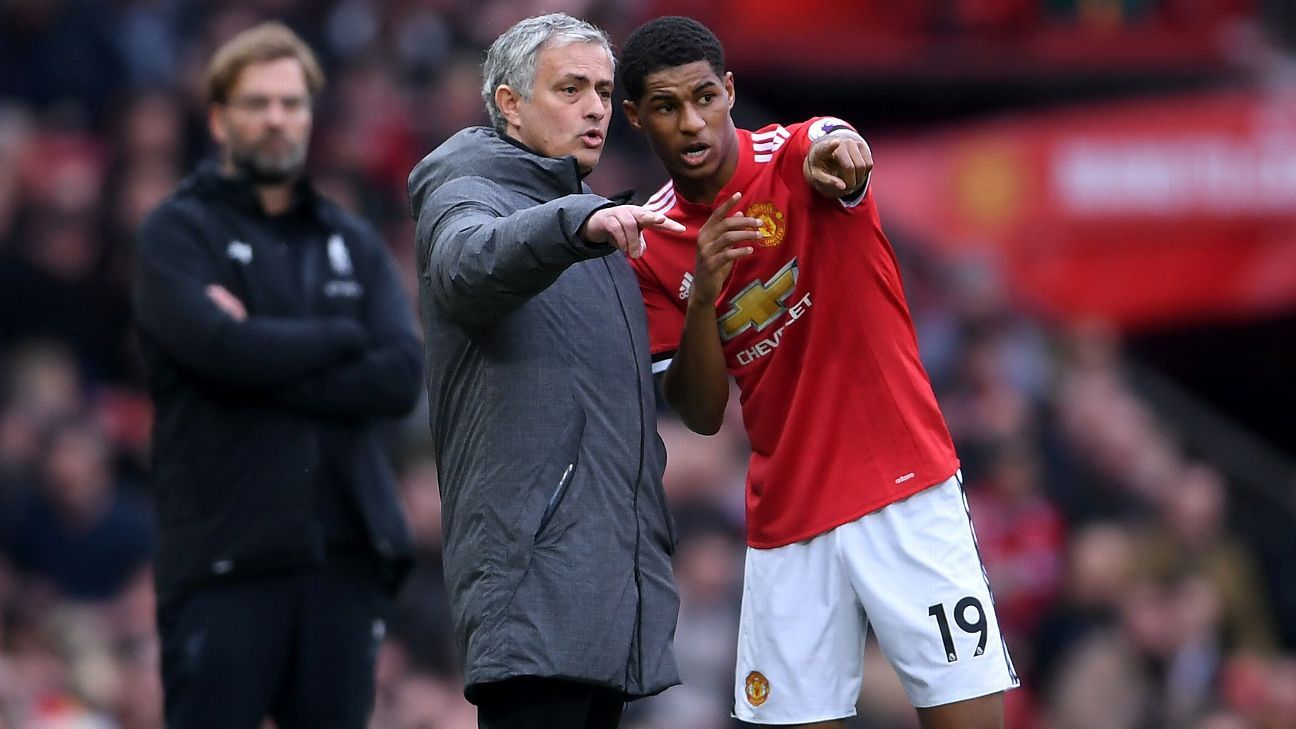 
MANCHESTER, England — It is easy to forget that Marcus Rashford is just 20 years old and a youngster still growing into a man’s body, as Jose Mourinho confirmed last July when he revealed the forward had grown three centimetres in 12 months.

And there have been more growing pains this season. Yes, his double strike in the 2-1 win vs. Liverpool means Rashford has 12 goals in 40 appearances, but the general consensus is that he has endured so-called second-season syndrome in his third campaign as a first-team player.

Such has been the focus on Rashford’s progress — or lack thereof — that a recent spell out of the United team prompted him to be asked after Saturday’s match, which was his first league start of 2018, whether he was reassured by the presence of England manager Gareth Southgate in the directors’ box.

The shrugged reaction answered the question clearly enough, even before Rashford revealed that he wasn’t the slightest bit concerned about his international place, thanks to the England manager maintaining a consistent line of contact during recent weeks and months.

Rashford will go to the World Cup and will also be a big part of what United do for years to come. He has had a dip, but is not one of those young players who is seeing his potential wasted, by himself or his club. Quite simply, he is going through the same ups and downs that the likes of Ryan Giggs, Cristiano Ronaldo and Wayne Rooney endured before him at United.

Against Liverpool, Rashford showcased once again why so many at Old Trafford regard him as the jewel in their crown. His pace terrified Liverpool, especially 19-year-old right-back Trent Alexander-Arnold, and his work-rate off the ball also proved crucial in the home side’s victory.

The two-goal hero was substituted by Mourinho midway through the second half, which brought audible boos from home supporters. But with Rashford on a yellow card, his manager insisted the change was done to protect his player from a sending off.

The modern-day rush to judgement is one reason why Rashford has been unable to go through his slump without others noticing. Every time he is left out of the starting line-up, questions are raised about his long-term future and his relationship with Mourinho, but the United boss insisted that his selection or otherwise has been based purely upon his impact in training.

“It was a big game; we trusted him, and he showed his qualities,” Mourinho said after the game. “He is improving a lot in training. Sometimes the media, the fans, you are not at the training ground, you don’t see what goes on; how well they train, the mood, the feeling. And the feeling was that he was improving a lot in the last few weeks.

“Against Crystal Palace, he improved us a lot in the second half when he came into the game. Today, we felt Marcus’ speed would be important and, with [Anthony] Martial injured, he was not even a doubt. It was a straight choice.”

Rashford’s strikes, which came 10 minutes apart, were decisive, and both highlighted his quality.

“He scored two goals in a big match against a top-class opponent,” Mourinho said. “Of course, it was fundamental. The first chance he had, he got it and scored. In the last few months, that has not happened for him, and he was feeling that a bit with his self-confidence. But he scored two goals, which is special for a kid who feels the shirt in a special way because he was born [in Manchester].”

But one knock-on effect of Rashford’s impressive performance is a problem for Mourinho, in terms of Paul Pogba.

The £89 million midfielder missed out on this game because of an injury sustained in training on Friday, yet his absence was not an issue for United against Liverpool. When he is fit, his manager will have to decide where — or if — he can accommodate Pogba and Rashford in the same team.

Scott McTominay is showing himself to be a reliable partner for Nemanja Matic in a two-man central midfield and offers greater defensive discipline than Pogba, whose best position is on the left of a three-man alignment.

That is close to the area from which Rashford proved so effective on Saturday; he could be moved to the right to create space for Pogba, but that would have implications for Alexis Sanchez.

Mourinho has not been afraid to drop Pogba, as he did against Sevilla three weeks ago, but if he is fit and not selected again for the return leg of that Champions League round-of-16 tie on Tuesday, it will be a huge vote of confidence for Rashford, who has a habit of scoring in big games against top opponents.

Either way, Mourinho will upset an important player but, on this evidence, he cannot leave his match-winner on the bench.