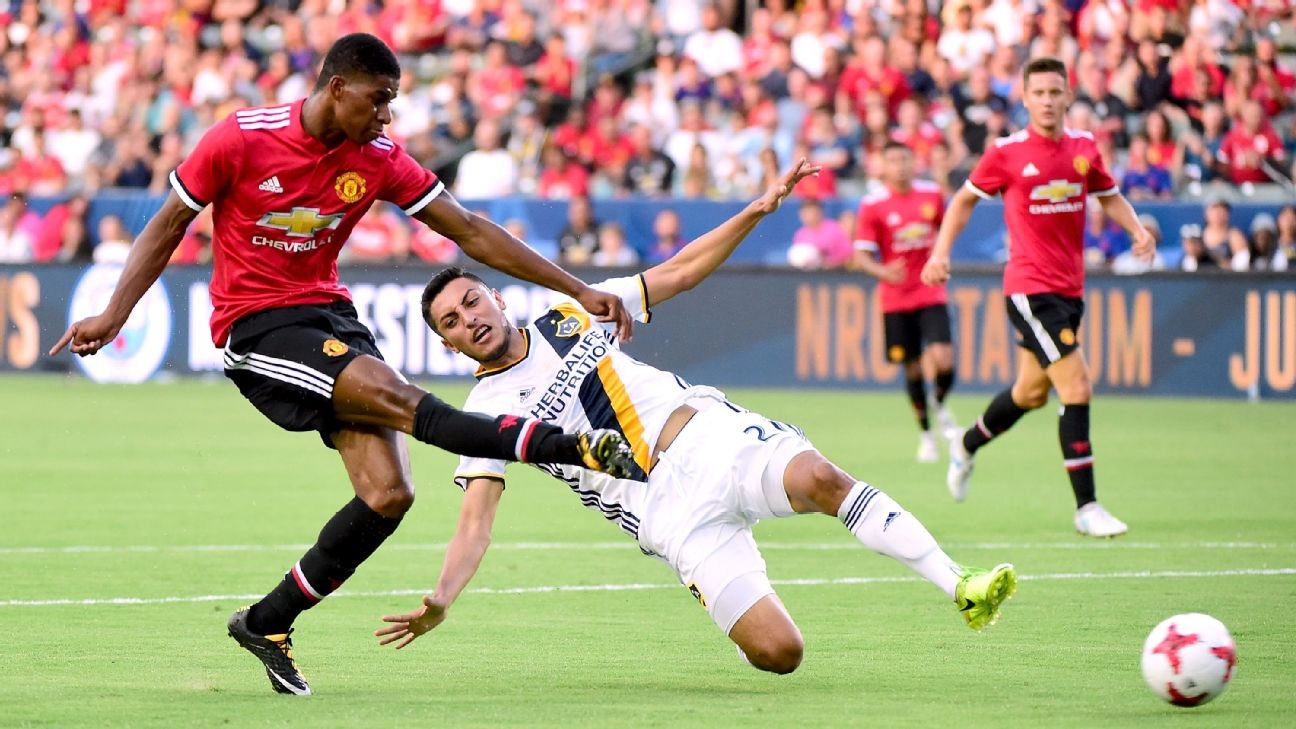 
LOS ANGELES — Here are three things we saw in Manchester United’s 5-2 victory over the LA Galaxy in the opener of the Premier League team’s US tour on Saturday night:

1. Rashford shows Lukaku that he has competition

Jose Mourinho still wants to add another attacking player to his Man United squad this summer, with Wayne Rooney and Zlatan Ibrahimovic no longer available to him, but Marcus Rashford gave a glimpse of the attacking riches he still has at Old Trafford with a two-goal display.

Rashford, still only 19, would have had a first-half hat trick in the StubHub Center but for a save by Galaxy goalkeeper Jon Kempin on 43 minutes when he had been put through on goal by Michael Carrick.

Yet even though the England youngster should have done better with that chance, he had already done enough in the opening period to show Mourinho the progress he is continuing to make and also to warn new signing Romelu Lukaku that he may not have the centre-forward position to himself this season.

Lukaku, a £90m buy from Everton, made his United debut by replacing Rashford at the start of the second half, but the Belgian could not replicate his new team-mate’s eye-catching performance.

Rashford’s pace destroyed Galaxy, but he also appears more powerful after his summer break, having benefited from not expending his energies with England U21s in the European Under-21 Championships in June. With pace and power, he will cause problems for any defence he faces, whether he plays through the middle or out wide.

Clearly, Lukaku will start the campaign as centre-forward and spend most of the season there, but Rashford will make him earn that position and give Mourinho the option of playing him through the middle instead if the new man struggles to make an early impact.

Michael Carrick’s elevation to the Manchester United captaincy is a sign of Mourinho’s admiration of the 35-year-old, but his age will clearly prevent him from playing on a weekly basis this season.

The former England midfielder gave a classy first-half performance, rarely losing the ball and controlling the tempo of the game against admittedly inferior opposition.

And with Carrick making way for Andreas Pereira at half-time, the Brazilian youngster was given the chance to prove he can offer something different for United and Mourinho this season. The 21-year-old is highly rated at United, but his first-team opportunities have been limited, prompting him to spend last season on loan at Granada, who ultimately suffered relegation from La Liga.

So this preseason is potentially Pereira’s last chance to make an impression on Mourinho, and the youngster did enough against LA Galaxy to suggest he has qualities to make him a valuable member of the squad. Pereira showed tenacity, a desire to receive the ball and a willingness to play quick, crisp passes to keep the game moving forward.

He does not have Carrick’s nous or experience, but Pereira could be an unexpected bonus for United this season.

It’s mid-July, most players are still shaking the sand off their feet and fitness levels are at the bare minimum, but the first game of preseason always carries more significance than it actually deserves — unless you win.

At this stage of preparations, it really is all about fitness and tactical experimentation, not to mention the need to bed in new signings. So the result of the first match after the summer break should be judged on that basis.

Yet despite all of those factors, what happens in Game 1 has a crucial effect on the mood within the camp, and Mourinho and his players will have left the StubHub Center delighted that they are now up and running after cruising to victory against the Galaxy.

Back in 2013, David Moyes’s United lost 1-0 to a Thai All-Stars XI in Bangkok in the Scot’s first game as manager, and the senior players in the squad at the time have since admitted their surprise at how the loss affected Moyes’s mood and approach.

It didn’t get much better for Moyes after that, but a year later Louis van Gaal guided United to a 7-0 win against the Galaxy in Pasadena, California. And in an instant, the depression of the previous year was lifted by a bright start to preseason.

The feel-good factor didn’t last forever under Van Gaal, but that win injected confidence and belief into the squad and helped give the Dutchman’s reign an immediate air of positivity.

Mourinho now has the same currency in the bank after this win in Los Angeles. It will not dictate whether or not United win the Premier League this season, but a win is so much better than a defeat, even in the first game of preseason.