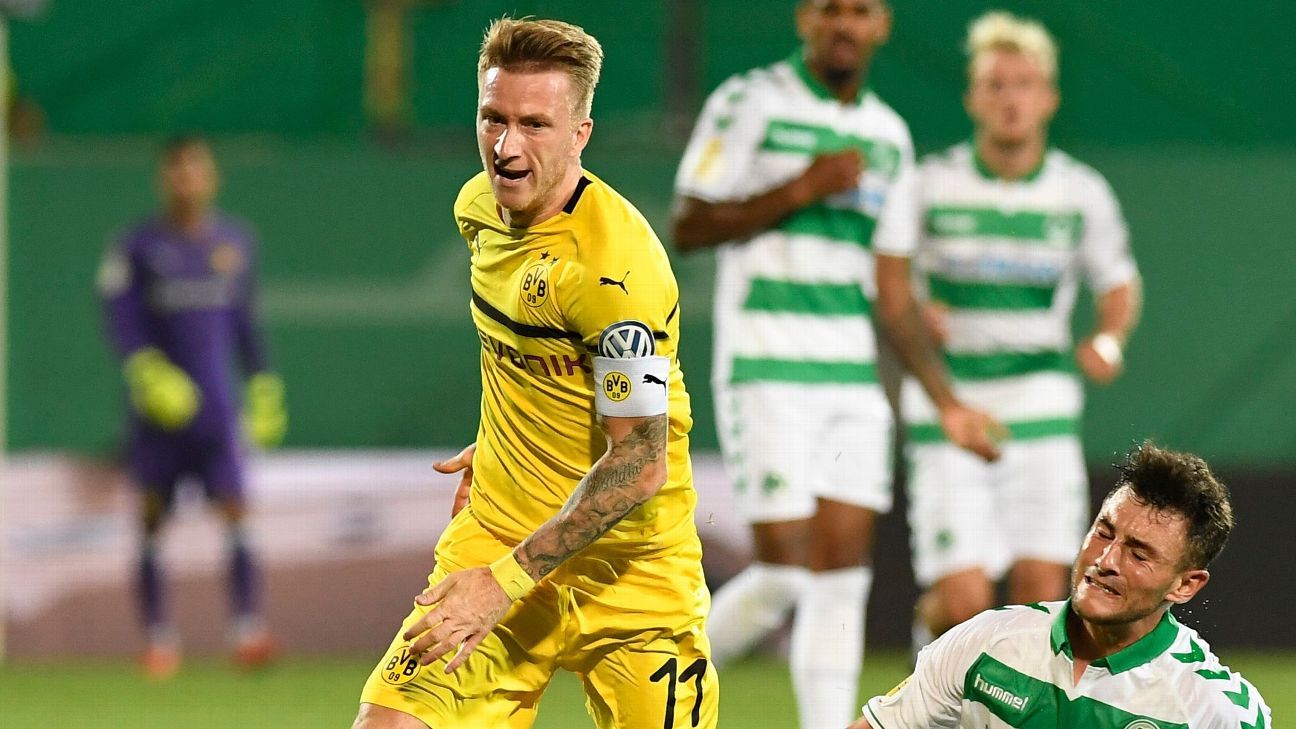 
Marco Reus was happy with a “dirty win” after scoring a dramatic 121st-minute extra-time winner against Greuther Furth in the German Cup on Monday.

Borussia Dortmund left it late twice against 2. Bundesliga side Furth. After midfielder Sebastian Ernst brought the hosts ahead in the 77th minute against the run of play, it was BVB summer addition Axel Witsel who prevented an upset with a last-gasp equaliser in the 95th minute of regular time.

Then, deep into extra-time, with a looming penalty shootout, Reus connected onto Jadon Sancho’s pass in the box to send his side through to the next round.

“Furth did incredibly well. They acted very compact and kept their ranks closed,” Reus told Sky after the game, explaining that his team acted too timidly. “At times we just didn’t find the courage to play actual attacking football. In the end, we’ll gladly take a dirty win home.”

Albeit being a late hero, Reus was the main culprit of squandering several golden opportunities to decide the match in Dortmund’s favour sooner.

As more chances went begging for the Westphalians, the outcries for the club to sign a centre-forward in the wake of Pierre-Emerick Aubameyang (sold to Arsenal) and Michy Batshuayi (returned to Chelsea after loan) only grew louder amid recent links to Liverpool’s Divock Origi and Barcelona’s Paco Alcacer.

Dortmund coach Lucien Favre, however, insisted after the game that the lack of a true striker was not the issue on Monday. Asked whether a target man was needed to put away the side’s many created chances, the 60-year-old told Sky: “I’m being asked that questions for weeks now. I will give a simple answer: We had eight scoring chances today. Usually, that suffices.”

Although the Black and Yellows came inches close to an embarrassing cup exit, it was no reason to sound the alarm for the newly appointed manager.

Favre told his own news conference after the match: “This is normal. It was tough for us away to a second division team. We are only five, six weeks together. Some players only joined us three weeks ago. The most important thing is that we advanced.”

Goalkeeper Roman Burki, meanwhile, reprimanded his teammates for their lack of killer instinct in front of goal.

He said: “We need to be a tad more efficient with our chances. Good chances alone are not enough, you also have to take them. We need to be ice cold and stop contemplating in front of goal. Sometimes a shot is better than a pass.”

BVB will open their Bundesliga campaign on Sunday when they host RB Leipzig at the Westfalenstadion.