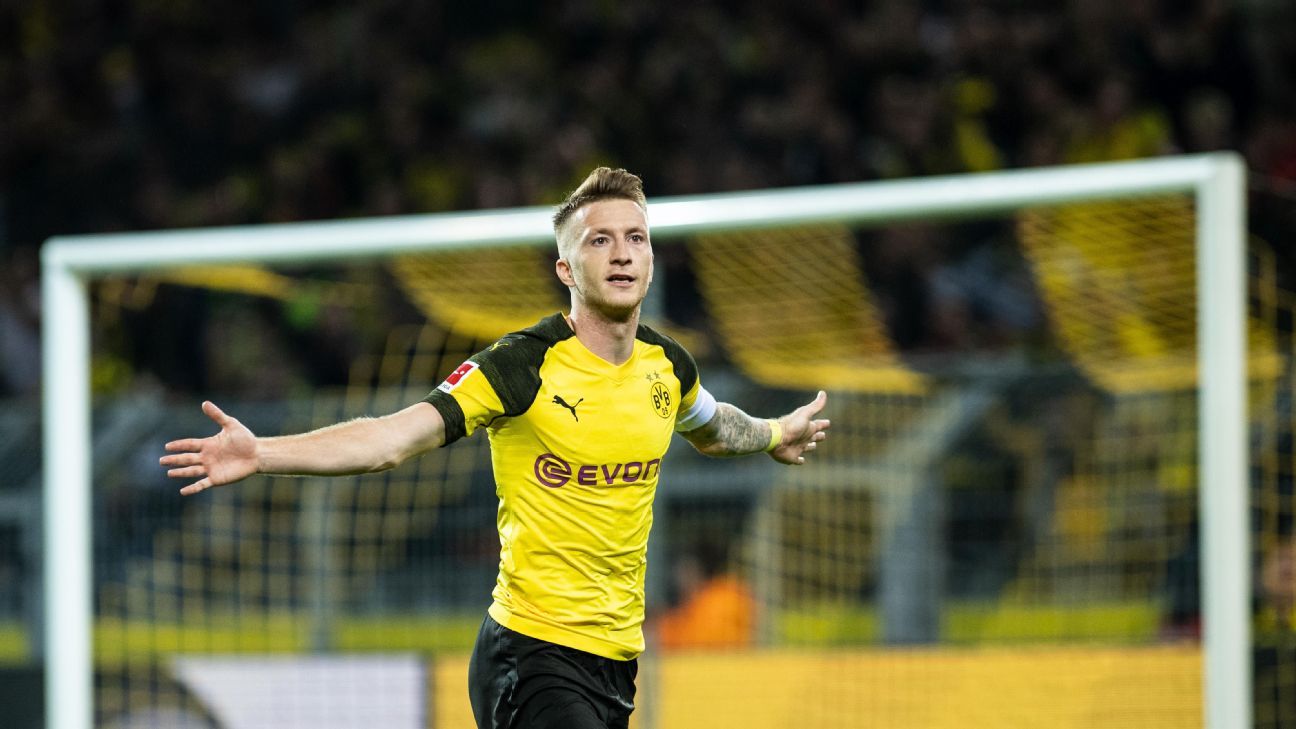 Reus, 29, scored a brace and provided an assist in a highly lopsided tie against the Franconian outfit.

“Scoring the 100th goal means a lot to me,” he told assembled media after the game. “It’s a great honour. It took long enough, and I hope that those won’t be the last goals I score for the club. I hope it continues like that.”

The Westfalenstadion was silent throughout the first 20 minutes as fans across the Bundesliga had agreed to remain mute in an “atmosphere boycott” to protest inconvenient kickoff times and the general treatment of supporters after a breakdown in dialogue with the German football federation (DFB) and German football league (DFL).

That, however, did not stop the Black and Yellows from making some noise on the pitch. Twenty-year-old Jacob Bruun Larsen opened the scoring after nine minutes and Reus doubled the lead in the 32nd. The goal fest ensued after the break with Real Madrid loanee Achraf Hakimi (49′), Reus (58′), Manuel Akanji (74′), Jadon Sancho (85′) and Julian Weigl (88′) all adding their name to the score sheet. It was Dortmund’s first 7-0 win since 1986 against Blau-Weiss Berlin.

“I wouldn’t necessarily say that it was easy, but you can say that Nurnberg were very passive today,” Reus explained. “They set up with a back five and were not very aggressive. Because of that, we could cleanly build from the back and quickly created scoring chances. Nevertheless, it was important that we scored goals early. Christian [Pulisic] and Jacob [Bruun Larsen] created an outstanding goal and we never let up after that, creating loads more chances.

“We always said that it will take time under the new coach and a new philosophy. Today was already really good, especially because Christian and Jacob not only stuck to the wings but also occupied the half-spaces. That made life much easier for Maximilian [Philipp] and myself because we could combine quicker and more directly.

“We know that we still have a lot of work ahead of us. We are aware of the fact that Nurnberg didn’t push us to our limit and that the match against Leverkusen will be very tough. They are on the up after winning their last three games, including the [Europa] League, and I’m sure that it will be another nail-biter.”

Dortmund coach Lucien Favre made five changes to the team that drew 1-1 away to Hoffenheim on Saturday. Hakimi made his debut in place of Lukasz Piszczek, while centre-back Dan-Axel Zagadou replaced the suspended Abdou Diallo. Thomas Delaney, Philipp and Larsen filled in for Shinji Kagawa, Marius Wolf and Mahmoud Dahoud.

But Reus said that the rotation that included a lot of young players wasn’t an issue at all.

“I’m not surprised that [Achraf] Hakimi played well today. In general, the coach told our wingers to be more courageous and force one-on-one situations more frequently. That’s the way to go for us to create chances and open up spaces for combination play elsewhere. Our attack and defence worked very well; our pressing worked like a charm. It was a step in the right direction.”

Sancho provided his fourth assist and first goal as a substitute in all competitions on Wednesday. Asked, whether the 18-year-old was of too much value as a super-sub rather than starting, Reus replied: “It’s just insane at the moment. It’s incredibly important for us because when [Jadon] comes on in the 75th minute, his maybe already tired opponent already knows [what’s coming]. That’s a great weapon to have. We’re happy to have him up our sleeve.”

Dortmund reduced Bayern Munich’s lead at the top of the table to two points after the latter had drawn 1-1 against Augsburg on Tuesday, although Reus said that he was taking little interest in the Bundesliga having a close title race.

“At the moment I don’t care if second and first are close together in the league. Right now we’re focused on ourselves and are taking every point that we can get — whether it’s a dirty win or a 7-0 drubbing. Looking at the table or at Bayern doesn’t make much sense currently.”

Meanwhile, Favre remained tight-lipped, telling his news conference after the game: “It’s great fun building this team,” but warned that there is a lot of work ahead.

BVB travel to Bayer Leverkusen on Saturday before hosting Monaco in the Champions League on Wednesday.