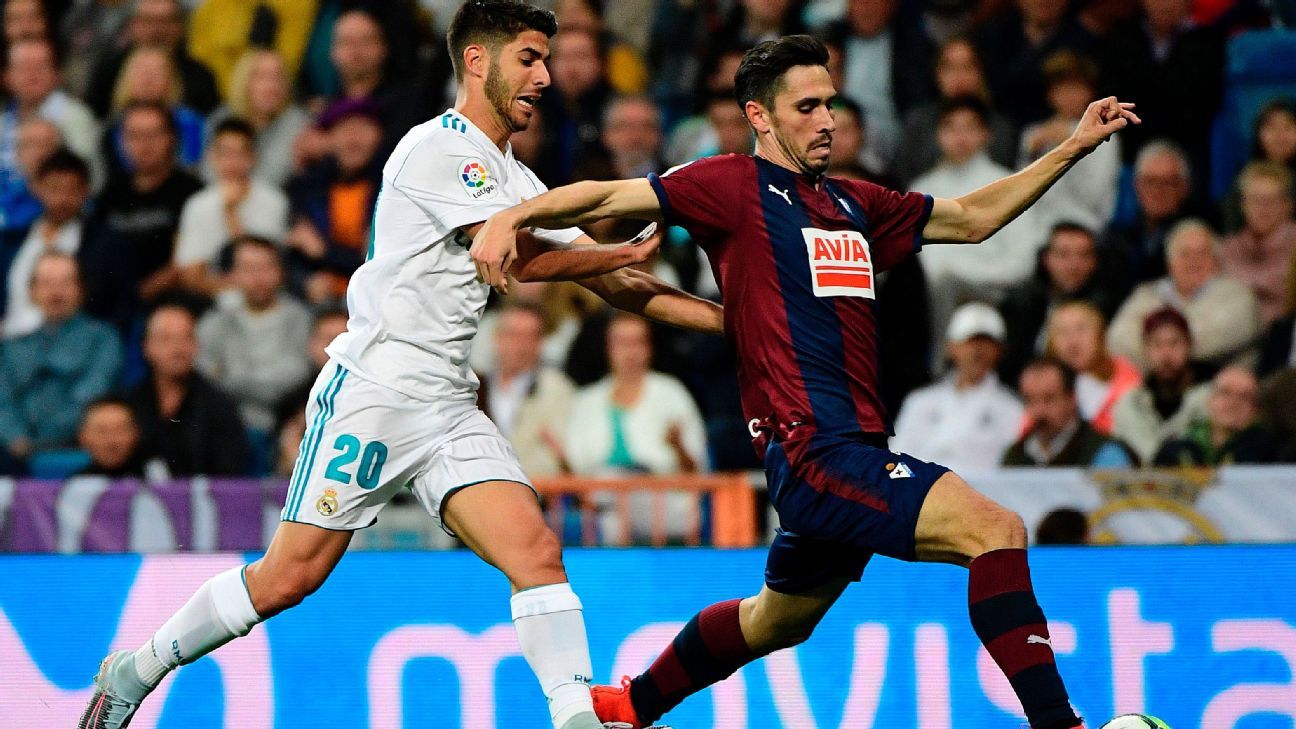 
Real Madrid ran out 3-0 winners against an ambitious Eibar at the Bernabeu to record a second consecutive home Liga victory. Paulo Oliveira opened the scoring at the wrong end under pressure from Sergio Ramos before Marco Asensio added the second just before the half-hour. Marcelo completed the job late on, driving a crisp shot past Marko Dmitrovic after a sweeping Madrid move.

A clean sheet and a few excellent individual performances partially vindicated Zinedine Zidane’s rotation policy. Marco Asensio rediscovered his verve and Isco was mesmerizing while Raphael Varane, who was a doubt before the game, looks back to his imperious best.

Real started nervously and Eibar created chances early on but lacked the decision-making to capitalise on the home side having only two defenders back at times. Passes were misplaced and players dispossessed as the visitors’ ability to get the ball forward quickly unsettled Zidane’s starting XI, who unshackled themselves only after the two-goal cushion was in place.

6 — Bringing in fresh legs in Theo Hernandez, Dani Ceballos and Nacho helped Real to counter Eibar’s early attacking intent, but substitutes Karim Benzema and Marcelo were among the best performers and the result may have been put beyond doubt earlier had they started; with a midweek Copa game next up, there was little reason for them not to.

GK Kiko Casilla, 8 — No Keylor Navas, no problem. Seasoned stopper Casilla made a good save on five minutes and two more late on from Sergi Enrich, who was offside, and Takashi Inui in a solid all-round display.

DF Nacho, 6 — A typically industrious game from Zidane’s man for all seasons and positions. Operating almost as a right winger, Nacho was a little loose in his distribution but showed a willingness to get up and down his flank and made a few interventions at the back.

DF Sergio Ramos, 7 — Took responsibility for dealing with Eibar’s aerial prowess with three clearances and provided an extra threat at the other end in an energetic box-to-box performance.

DF Raphael Varane, 8 — Superb at the back, Varane read Charles’ attempt to wrong-foot him when he was the last man and showed a beautiful bit of footwork to lose two markers going forward. In terms of positioning and anticipation, there are few better at the moment.

DF Theo Hernandez, 7 — A lung-bursting first-half run capped an adventurous if not particularly productive opening 45. Hernandez came alive in the second period and showed the sort of attacking intent he displayed at Alaves last season while also providing intelligent cover at the back.

MF Casemiro, 6 — The Brazilian has never seen red in his senior career but it’s surely a matter of time. Went in the book after looking for trouble with Charles and then shoved Takashi Inui, later bringing the Japan international down in the box, which went unnoticed by the referee. No player made more tackles, as is standard, but nobody in a white shirt lost the ball more often.

MF Dani Ceballos, 7 — A loose early pass in his own half was the only blip in an otherwise mature display from the 21-year-old, who was neat in possession, eager in the press, guarded the ball well and covered his lines with two tackles.

MF Luka Modric, 7 — Showed flashes of his undoubted genius, a nutmeg on Joan Jordan to tee himself up, a perfectly weighted outside-of-the-boot pass for Asensio and a through ball for Ronaldo among the highlights of another polished performance from the Croatian.

MF Isco, 8 — Drew a save from Dmitrovic and provided the assist for Asensio operating in a free role behind the forwards, where his unique skill set is best showcased. He should have scored at the start of the second half but the Eibar keeper made an excellent stop. A masterclass of ball control and vision, if occasionally lacking in execution.

FW Marco Asensio, 8 — Sent in the cross for the opening goal and hit a glorious effort for the second, a first-time shot on the half-volley through the legs of a defender. A performance up there with his sparkling early-season form, Asensio went off to an ovation.

FW Cristiano Ronaldo, 5 — It was telling that Ronaldo drew the applause of the Bernabeu for chasing down a lost cause, a little mea culpa from the Portuguese in the absence of goals. They failed to materialize again on Sunday, Ronaldo managing only two shots on target. One of those, saved well by Dmitrovic, would have gone in last season and his frustration showed in the second half when Isco failed to square despite the presence of four defenders. A wild free kick into the upper tier compounded his misery.

FW Karim Benzema, 7 — On for Asensio just after the hour mark, Benzema was involved in some glorious link-up play to assist Marcelo’s goal.

MF Lucas Vazquez, 6 — On for Isco, Vazquez ran himself into the floor as always but his crossing was a little awry.

MF Marcelo, 8 — Zidane decided to give the Hernandez-Marcelo combination another test run and was rewarded when the left-back started a move and the Brazilian, operating in an advanced midfield role, finished it with aplomb.