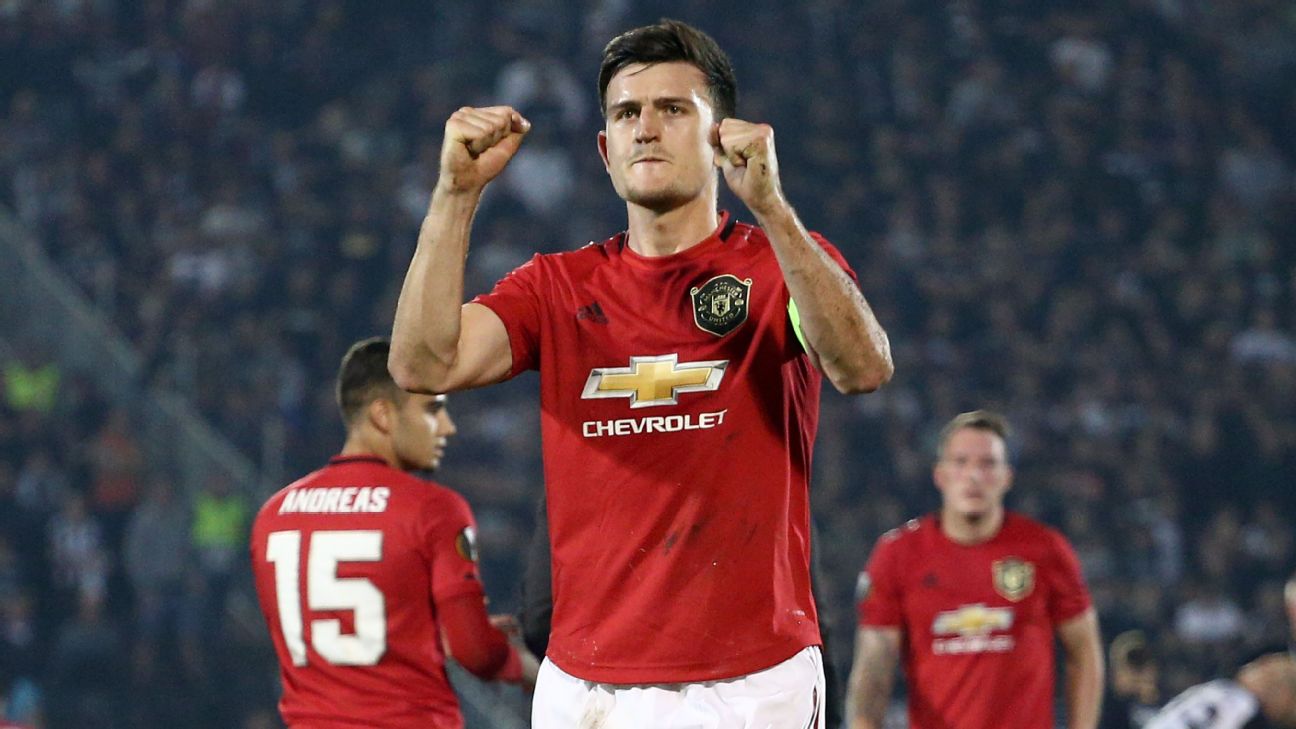 
BELGRADE, Serbia — So after 232 days, Manchester United have won an away game again. Since defeating Paris Saint Germain 3-1 in the Parc des Princes last March, Ole Gunnar Solskjaer’s team had failed to win any of their subsequent 11 road trips until, finally, the run was ended with a 1-0 Europa League victory against Partizan Belgrade in Serbia on Thursday.

United still have many issues to address — they could not add to Anthony Martial‘s 43rd-minute penalty to score more than once in a game for the first time since the opening weekend of the season — but with the trip to Belgrade, the first of four consecutive away games, the positives of winning away from Old Trafford again cannot be overstated.

Next up, on Sunday, is Norwich City at Carrow Road, where champions Manchester City lost 3-2 last month, and then comes a Carabao Cup trip to Chelsea on Wednesday. A clash with Bournemouth at the Vitality Stadium on Nov. 2 rounds off the quartet of away days, so it was crucial that Solskjaer’s team did not make it 12 away games without victory inside the noisy and hostile Partizan Stadium.

This United team is taking small steps toward improvement, and it would be naive to suggest that beating Partizan — four days after ending Liverpool’s 100 percent winning start to the Premier League season with a 1-1 draw — is a sign of a corner having been turned. Perhaps they are beginning to turn it, but Martial’s goal was United’s first away from home since August and it was also a set piece, so another time they have been unable to score from open play.

This was a first win of any kind in seven games, and the opposition were spirited rather than imposing, so bigger tests await. Yet with confidence so low within Solskjaer’s squad, the positives of this win must outweigh the negatives that continue to hang over the team. It was a night when eight of the 14 players on duty for United were age 23 or under, and the likes of Brandon Williams, Scott McTominay and James Garner all impressed in a challenging environment of constant noise.

– Ratings: Williams excels in Man United’s narrow win
– Europa League group stage: All you need to know
– Kuper: Why Solskjaer’s appointment is a warning to other clubs
– Ogden: Man Utd need Kane, but will they go get him?

“They did excellent,” Solskjaer said, when asked about the performance of his youngsters. “Jimmy [Garner] just grew in the game and got better and better. But Brandon was man of the match; no fear, brave as a lion, and he got us the win (with his run for the penalty). He has a great attitude and he is going to become a top player.”

Williams, 19, has the chance to claim the left-back spot as his own with Luke Shaw still sidelined due to injury. The youngsters continue to show promise, but their development requires senior players to help them improve and learn from their experiences. Reinforcements in January would help, but if United opt against making signings in the coming window, Solskjaer’s young players will have to shoulder the burden of performing while also learning the game.

The experience of performing, and winning, in Belgrade will be a big tick in the box, but the kids cannot do it all on their own. Whether Solskjaer is ready to rely on some senior players remains to be seen. While he is prepared to talk up Martial’s goal threat, the United manager was also quick to mention the Frenchman’s shortcomings.

“We should have stopped [Partizan] more up front,” Solskjaer said. “We need to show more intensity in our pressing.”

Pressing the opposition defenders is a key aspect of Martial’s role as central striker, but he rarely looks like a player prepared to put in the legwork required by Solskjaer. The summer departures of Romelu Lukaku and Alexis Sanchez ensure that United need Martial more than ever, though, so Solskjaer must find a way to get him doing what is expected of him.

Martial will play at Norwich and his return to the starting lineup will give United greater threat, but they once again failed to create a shot on target from open play in this game, and the inability to carve open opponents is why Solskjaer’s team continue to find themselves dropping points. If they do not take their chances, they will give the opposition a route back into the game. Partizan had their chances in this fixture and Solskjaer admitted that his players have to start killing games off.

“In games like this, when you are 1-0 up, we need to learn when to get the second, when to get the third,” he said. “We had chances to make sure we had a comfortable lead, but we didn’t.”

United did, however, manage to hold onto the victory, which keeps them top of Group L. But after finally winning one away game, Solskjaer admits that the most important challenge now is to win another.

“We look forward to the next one and we will try to win the next one,” he said. “But we need to win away from home in the Premier League. We need to build some momentum.”

Next stop: Norwich. A failure to win there will ensure that this victory is quickly forgotten.