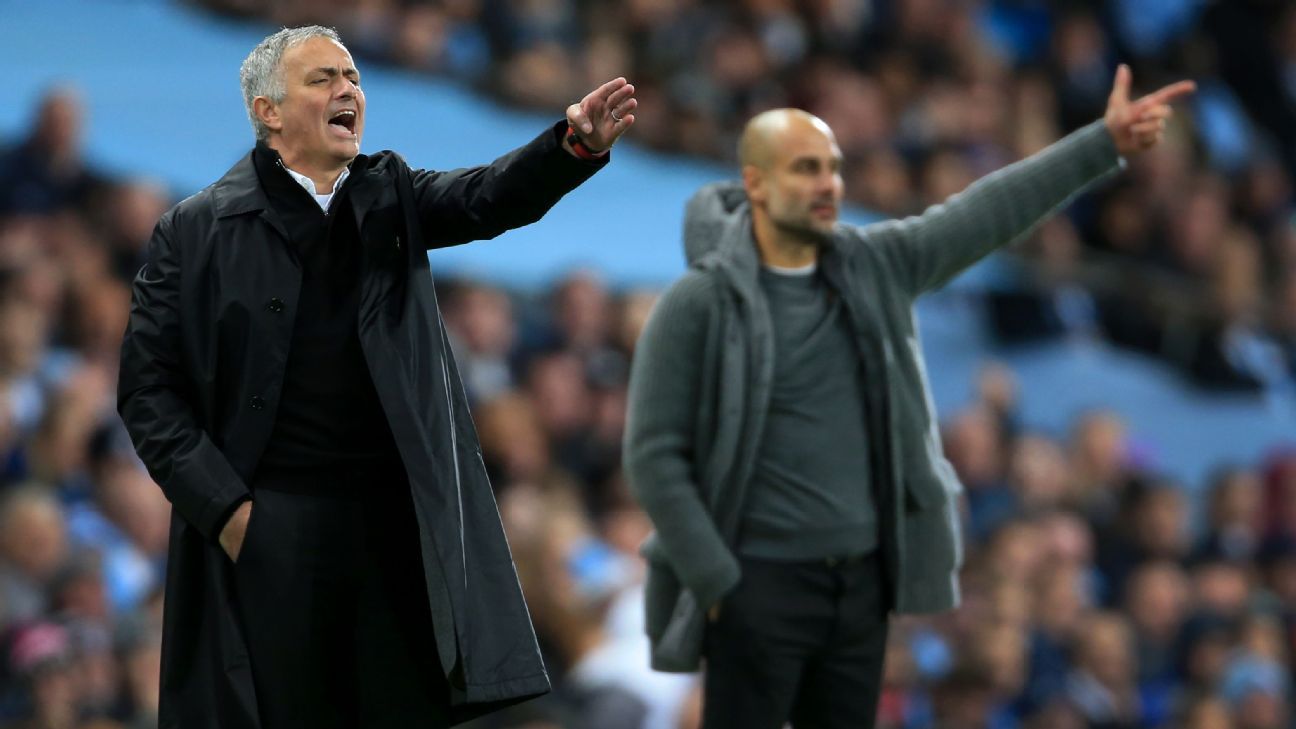 
MANCHESTER, England — Jose Mourinho was not wrong when he claimed ahead of the 177th Manchester derby that Manchester City are “untouchable.”

Off the field, the last week has seen the latest Football Leaks revelations pose questions about how City’s rise to the top has been funded by their Abu Dhabi owners, but on the pitch their 3-1 derby-day victory over Mourinho’s United hammered home the reality that the blue half of Manchester reigns supreme.

Pep Guardiola’s team are two points clear at the top of the table, even though second-place Liverpool and Tottenham, in fourth, have made their best starts to a Premier League campaign and Maurizio Sarri is enjoying the most successful start by a new manager with unbeaten Chelsea.

The best of the rest are doing all they can to keep up, but City are still ahead of the pack. As for United, they are the so-called contenders who are punching well below their weight and their performance at the Etihad Stadium highlighted why they have been so unimpressive this season.

Make no mistake, Guardiola’s champions are a team full of talent; every department is strong and the City squad is deep in every position. But United have been assembled at great expense by a succession of managers since Sir Alex Ferguson’s retirement in 2013, yet they are inhibited, cautious and hard to watch.

Moreover, they feature a group of players who lack the fight of opponents, not to mention their predecessors in a red shirt. And all of that is down to the man who picks the team and devises the tactics.

Mourinho’s hand was certainly weakened on Sunday by the absence of Paul Pogba through injury, but it is an indictment of United that they do not have a player capable of stepping in to fill the void left by the inconsistent and, at times, infuriating French midfielder.

City were also without a key midfield man but the loss of Kevin De Bruyne, who is regularly more impressive than Pogba, was not felt by the home side. In terms of tactics and personnel, Guardiola has options to overcome the loss of any player, whereas United simply have a mediocre squad with too many players not good enough at the top level.

With former manager Ferguson watching from the directors’ box, United mustered just one effort on target and that was Anthony Martial’s second-half penalty, which made it 2-1 after goals from David Silva and Sergio Aguero for City.

Substitute Ilkay Gundogan added to the lead on 86 minutes to complete a move of 42 passes, which once more exposed the gulf in class between the two sides. United ended this game in eighth position, 12 points behind their cross-city rivals and with a negative goal difference after 12 games.

Those are not the statistics of a team likely to challenge for the title, but despite the evidence weighing so heavily against his side, Mourinho attempted to put a positive spin on United’s fourth league defeat of the season.

“I consider the performance of my team one of mistakes rather than a bad performance,” Mourinho said. “We made mistakes and were punished, but the belief and fight we showed until the end is something that we are building and we not going to give that up with one defeat.

“This week, City played three home games and we played three away. They had two 6-0 wins, relaxed, no pressure, everything nice and easy. We played two matches away, difficult ones, the second was a final against one of the best teams in Europe (Juventus), which demanded everything we had to give, physically and mentally.

– City show why they rule Manchester
– Mourinho: Defeat will not affect United
– Guardiola: No need for Sterling’s showboat

Mourinho added that “this game was open for 80-something minutes, nobody left the stadium until the third goal” and his attempts to find mitigation for the loss are understandable. After all, no manager will ever say that his team lost because of the tactics or players that he selected.

However, United started with three defensively minded midfielders: Nemanja Matic, Ander Herrera and Marouane Fellaini. It was a selection that gave City the green light to dominate from the opening kickoff and meant Marcus Rashford and Anthony Martial were given a thankless task up front, asked to use their pace to hit City on the counter.

Meanwhile, Jesse Lingard was the link between midfield and attack, expected to chase down blind alleys in search of the ball. Watching from the United bench were the more creative Juan Mata and Alexis Sanchez; it was as though Mourinho had given up any hope of winning before his team kicked a ball.

City were more composed and played like a team that knew exactly what to do in defence and attack, marching on without so much as a sideways glance at their rivals.

“It is November, so we haven’t even finished the first round [of fixtures],” Guardiola said. “A lot can happen in football, but we are scoring a lot of goals and creating a lot.”

City are doing everything right, on the pitch at least, while United continue to flounder in search of a way forward.