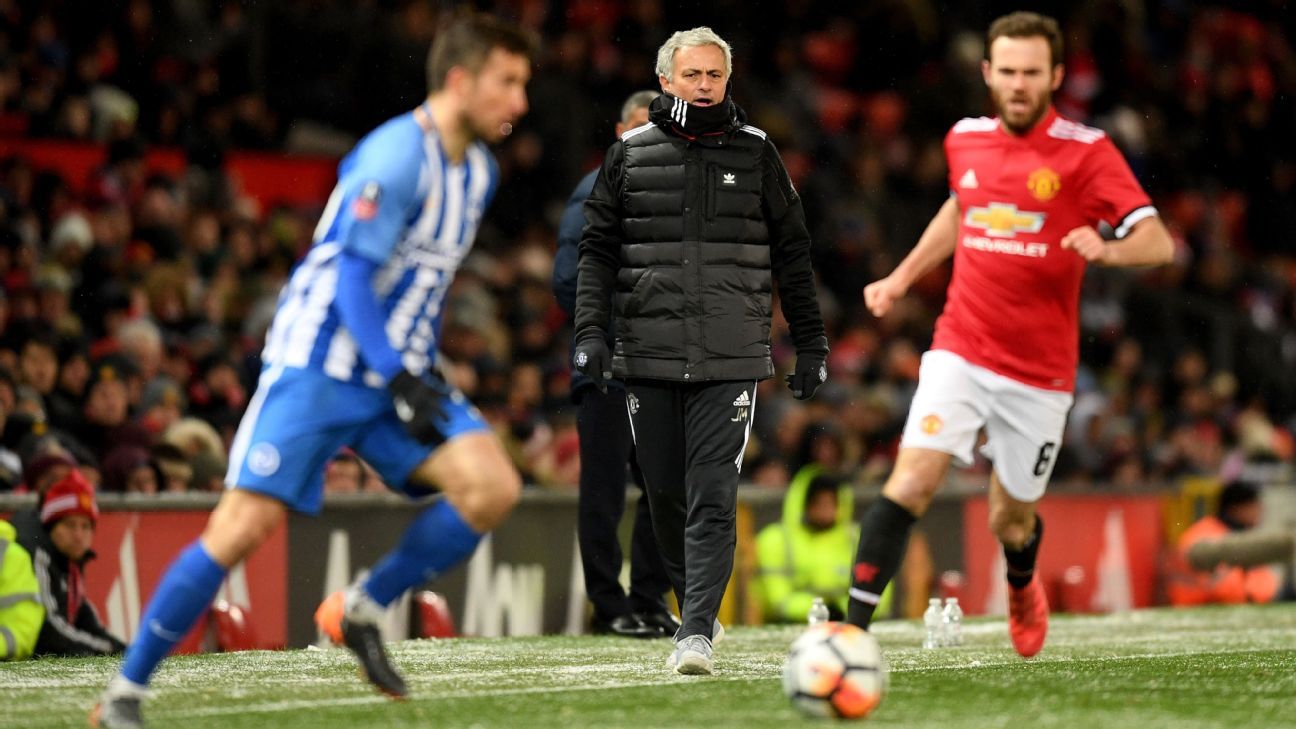 
Manchester United’s visit to Brighton in May featured was an abject performance in a month of poor showings. A sold-out away end travelled for the most distant away game of the season. Brighton is seven miles further from Manchester than Bournemouth — on a Friday night and saw a limp 1-0 defeat. Things have to be better on Sunday when the two teams meet again.

It was after Brighton away last season that Jose Mourinho ripped into his players and staff, correctly telling them that what he was seeing neither good enough nor acceptable. The manager told them that, from that point on, he had no interest in being their friend and that, if any of them were not happy, they could leave.

While the sentiment and Mourinho’s desire to get command of the dressing room were right, his comments brought on another issue: Some of his players did want to leave. Matteo Darmian and Anthony Martial, both of whom started that night, had long been unhappy, while Paul Pogba’s relationship with his boss has left room for improvement. What you are reading now about it is nothing new; this has been going on all year.

It happens. Sir Alex Ferguson would turn on his players if he felt they were slacking, while his players would often go to war on each other. You would be surprised at the number who didn’t speak to each other when they were winning trophies, but all that passion, anger and drive somehow resulted in a successful team and, when that happens, everything else pales in comparison.

It is a chicken and egg situation with Mourinho and Pogba: Manager drops player when player performs poorly; player feels he could be used better by manager; manager and player do not see eye to eye as a result. Club pressures manager to pick player; player knows he has power because he is so important in the dressing room and to the club.

Even if Pogba wanted to leave as Martial does, United have no intention of selling contracted talents and certainly not now, when replacements are hard to sign. The best players are needed and the club maintain the squad is strong enough to challenge for the Premier League title. United are attempting to rebuild around Pogba and the majority are contributing to a decent mood in the team.

Pogba shirts are by far the biggest seller among United fans, followed by those bearing the names of Alexis Sanchez, Marcus Rashford and Jesse Lingard, with Romelu Lukaku and David De Gea a long way behind. That is only one indicator of popularity and — look in the away end on Sunday and you will see no more than 10 percent of supporters wearing United colours — but it’s still an indicator that adds to the bottom line.

Among the fan favourites, Rashford has changed his number from 19 to 10, which leads to retailers being pressured for refunds on recently-bought shirts. There is hope the 20-year-old can push on and become a top striker, while many want Pogba to establish himself as United captain.

The Barcelona link? Could you blame him? Playing with Lionel Messi, living in the sunshine by the sea and playing for a team more likely to win the Champions League? Yet Barcelona have been very cool on talk of actually wanting Pogba and baulked at the numbers his agent Mino Raiola quoted in 2016.

Players will always be tempted, just as they are to join United. David De Gea nearly went to Real Madrid but he is now thankful for what he gets playing club football in England: More trust, support, respect and peace and quiet if you do not court the tabloid glare. The goalkeeper had little of that the summer from Spain over, where there is far less patience from fans and the media.

United — the club rather than the manager — will do all it can to keep Pogba. That means fellow players talking him up; Luke Shaw, who speaks articulately, was the latest to do it. United fans do not want to lose Shaw either because they can see his potential, but he needs to show more than that this season.

Mourinho deserves some sympathy. He has to deliver bad news to players who have more power than ever. Coaches have work in such an environment, usually by getting their biggest stars onside, as Ernesto Valverde did with Messi at Barcelona.

Mourinho is also operating in a league that is harder to win than at the turn of the millennium, when United and Arsenal reigned supreme and were the top dogs in the transfer market. That is why, to keep the United planet on an even keel, victory is vital on Sunday. Brighton were poor in losing their opening match at Watford, but recruited well and have recent memories of beating United at home.

Over 6,000 United fans applied for 3,019 tickets for Sunday, proof of the vast demand for every game away from Old Trafford. Nearly 8,500 applied for 2,458 at Burnley on Sep. 1, with 7,500 in the ballot for 2,074 tickets at Watford three weeks after that. The next time someone tells you that it is easy to support a club like United, remind them how difficult it is to get away tickets.

Those in attendance will be brilliant, backing the red shirts and odd-looking red socks, no matter who wears them.