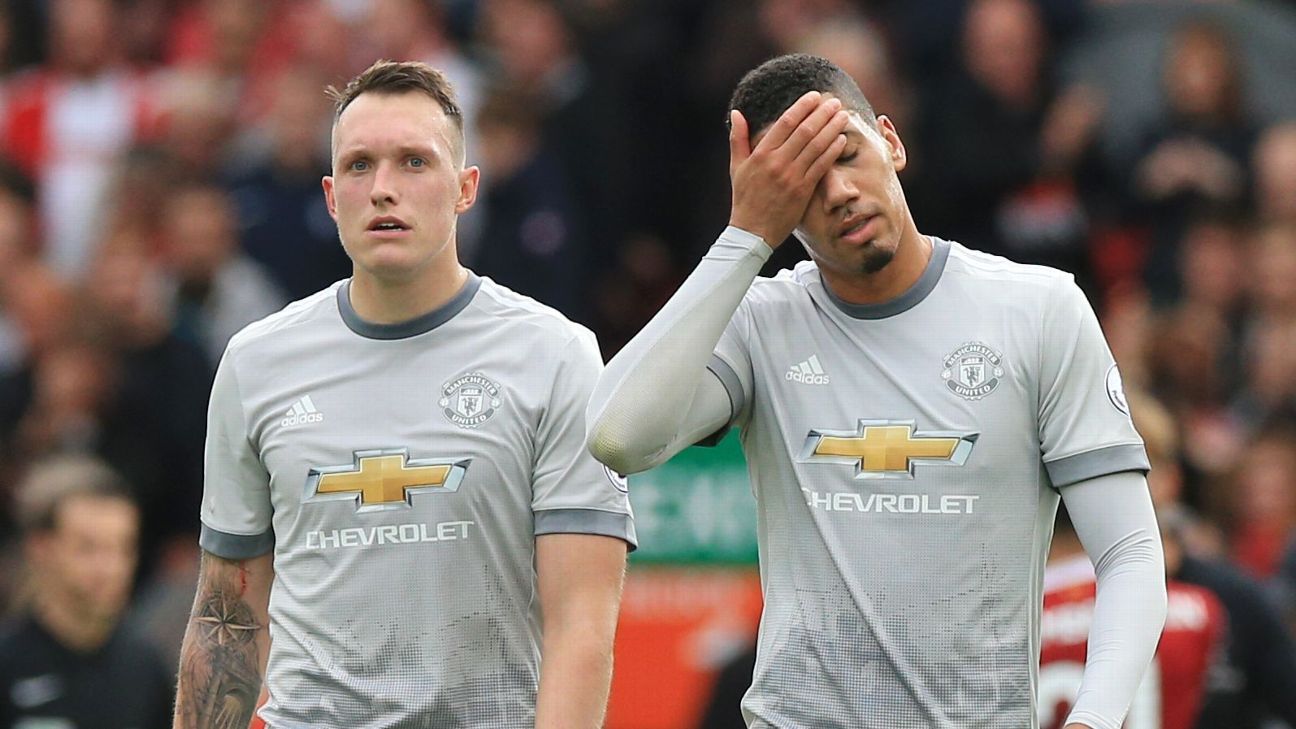 Twenty-eight was also the number of league goals conceded by United, only one more than the league-best Manchester City. Jose Mourinho’s defenders should be complimented, though that total would have been higher had it not been for the manager’s tactical pragmatism, which can bore fans, and David De Gea’s brilliance in goal

Nobody thinks that having such a changeable defence is the mark of a great team. When United were English, European and world champions a decade ago, the back four was set with Nemanja Vidic (35 league starts), Rio Ferdinand (32), Wes Brown (34) and Patrice Evra (33).

The quartet were in the lineup for, on average, 48 games in all competitions. Indeed, so settled was the defensive alignment that it may have blocked Gerard Pique’s passage to the United first team, but it was a significant contributory factor to success.

In 1991, Steve Bruce, Gary Pallister, Clayton Blackmore and Denis Irwin averaged an astonishing 54 starts and the treble-winning side of 1998-99 had two defenders who started more than 50 games (Gary Neville and Jaap Stam), while Denis Irwin managed 45. Last term? United’s four most-used defenders managed an average of 31.

For the third summer in succession, a manager noted for building teams from the back is seeking to add another central defender — after Bailly in 2016 and Lindelof last year. Bailly, 24, started well at Old Trafford while Lindelof, who is one year younger, began nervously in the European Super Cup and was given fewer chances, having to wait until October for his league debut.

Though not the finished product, Bailly looked good at the start of this season alongside Jones and then, after missing several months, was brilliant against Liverpool. The Ivory Coast international is happy at United, but his manager wasn’t satisfied with him at the end of the season, oddly claiming that he was out of favour because he wasn’t going to the World Cup. Neither were other players, but they still played.

Bailly and Lindelof cost £30 million, which may not seem so pricey given football’s post-Neymar inflation, but only seven defenders have cost more than £35m: Leonardo Bonucci, John Stones, David Luiz, Benjamin Mendy, Aymeric Laporte, Kyle Walker and Virgil van Dijk. Four of them have moved to Manchester City in the last two years. Though Mendy and Stones have hardly been mainstays, that shouldn’t detract from United’s concerns.

Mourinho likes some characteristics of every defender at the club and has praised — and criticised — them all at times, as their form has fluctuated. Rojo, 28, is a case in point: In 2016 few fans would have been sad to see him leave. Twelve months later he was one of the best players on the team, yet injury has since seen his stock dip.

Jones, 26, is a very good defender but one who is injury prone and started just 23 league games last season. He was excellent against Tottenham in the FA Cup semifinal at Wembley — if not in the league game between the sides at the same venue — but he rarely features in European games. His bravery should be applauded, but Vidic was similarly brave and he managed to play 30 percent more games.

Smalling, 28, can be a fan scapegoat and is not considered to be at the same level as the players he replaced by his peers, though few are on the level of Vidic and Ferdinand. His mistakes don’t make for pleasant replays and yet, just as the abuse peaks — even from his own fans — he’ll do something like score the winner in the Manchester derby.

United have not told any of the five established central defenders that they can leave as yet, but the search for improvement continues. It is why Mourinho bought Bailly and Lindelof and why he went for Atletico Madrid’s Jose Gimenez in January 2017. The tough Uruguayan was interested in the move, but his club had no interest in selling him. He has stayed on United’s radar, as have Real Madrid’s Raphael Varane and Spurs’ Toby Alderweireld.

Getting them is the hard part, though. United will continue trying to sign another central defender, hopefully a talented player who will be welcomed by supporters and play every week like the greats of the past.