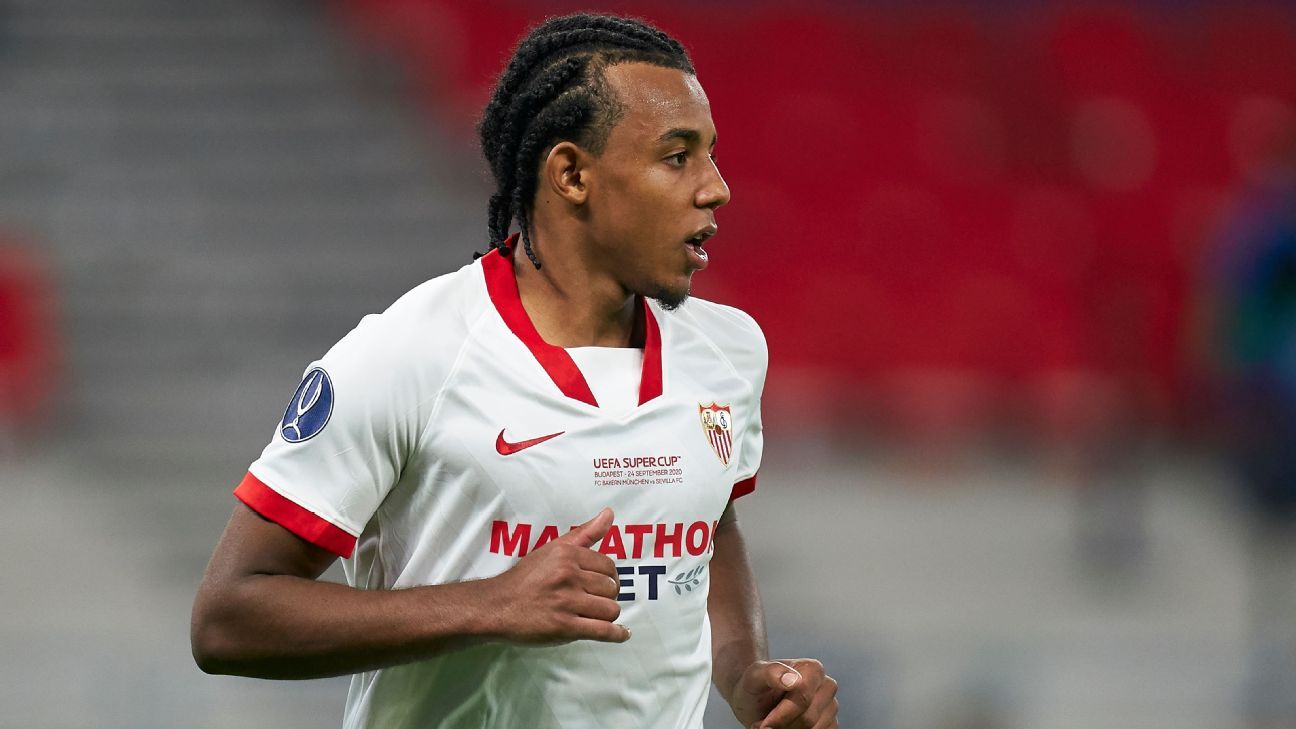 United have been linked with several central defenders throughout the season, including Real Madrid‘s Raphael Varane and Fiorentina‘s Nikola Milenkovic.

But Varane is now the top name on Chelsea‘s centre-back shortlist, which may have played a part in United’s decision to switch their focus to the 22-year-old Kounde, who has made 43 appearances across all competitions for Sevilla so far this term, as well as featuring at the Under-21 European Championship for France.

Whoever does come in to strengthen Ole Gunnar Solskjaer’s defence will accompany club captain Harry Maguire, with Victor Lindelof and Eric Bailly both facing an uncertain future.

11.56 BST: Paris Saint-Germain sporting director Leonardo says there is no rush to discuss a new contract with striker Neymar. And he is also confident there will be no problem getting Kylian Mbappe to extend his deal. Both players see their terms expire in little more than a year, and Mbappe has been strongly linked with Real Madrid.

“Neymar’s extension? We are in no hurry,” Leonardo told Canal+ on Saturday. “Nobody is running behind us, we are really quiet, we have very good and frank reports.”

Neymar said earlier this month: “The contract extension with PSG is no longer a topic. It is obvious that I feel very much at ease and very at home here at Paris Saint-Germain. I feel happier than I was before.”

On Mbappe, Leonrdo added: “Everything is clear, we know Kylian’s situation, he knows what we think, there is nothing more than that.

“He still has a year on the contract, his decision will come. We are generally optimistic [about a new deal]. We do not even have a reason not to be optimistic about the future. I ask once again for total concentration “

11.07 BST: It looks like there is going to be a summer transfer battle for left-back Nicolas Tagliafico. The Daily Mail reports that Ajax are willing to let him leave for just £13m, which is sure to interest a raft of clubs.

Inter Milan, Leeds United and Manchester City are all said to be considering a move for the 28-year-old Argentina international.

10.19 BST: Tuttosport reports that Juventus are leading the chase of Serie A clubs for free agent Sergio Aguero, who will leave Manchester City when his contract expires in the summer. However, Inter Milan are ready to show their hand — but they will only be able to afford the financial package if Lautaro Martinez were to move on.

Lautaro has already agreed terms on a new contract, but Inter may yet still need to sell a player to balance the books. The striker has been linked with Barcelona in the past but the coronavirus crisis means they may not have the funds.

Aguero is going to be one of the hottest properties on the transfer market this summer and has himself been linked with Barca.

09.30 BST: Borussia Monchengladbach forward Alassane Plea is being tracked by both Arsenal and Manchester United, according to the Daily Mail. Plea has scored 36 goals in 104 games since joining Gladbach from Nice in a £21m deal three years ago.

Both clubs could be in need of a new striker in the summer, with uncertainty over the futures of Pierre-Emerick Aubameyang, Alexandre Lacazette and Edinson Cavani.

The report states that the 28-year-old could be available for just £15m.

– Borussia Dortmund see 17-year-old midfielder Jude Bellingham as untouchable in the upcoming transfer window, according to Fabrizio Romano. There are numerous Premier League clubs, namely Chelsea, interested in the England international, but it is suggested that he’ll be staying put for now. This will be encouraging for BVB supporters, especially after his impressive performances against Manchester City in the Champions League.

– Torino are hoping to bring in Cagliari attacker Joao Pedro during the summer transfer window, as reported by Tuttosport. There is a plethora of clubs from within Italy and around Europe showing interest in Torino talisman Andrea Belotti, with Manchester United, Liverpool, AC Milan and Inter Milan among them. It is stated that the Brazilian could be brought in to replace Belotti, or even persuade him to stay put for longer, with his contract coming to an end in 2022.

– Napoli are interested in signing Federico Dimarco, the 23-year-old Hellas Verona full-back currently on loan from Inter Milan, as reported by Calciomercato. It is suggested that Verona have the option to sign Dimarco permanently for €6m when his loan ends, with Inter getting 20% of any future deal.

– Wolverhampton Wanderers are set to battle Aston Villa to sign Chelsea striker Tammy Abraham, reports Football Insider. The 23-year-old has struggled for game time in recent months, making various clubs aware of the Englishman’s availability in the summer. There will be competition to sign him, with clubs both in the Premier League and abroad holding an interest, and West Ham United are one of those previously linked.