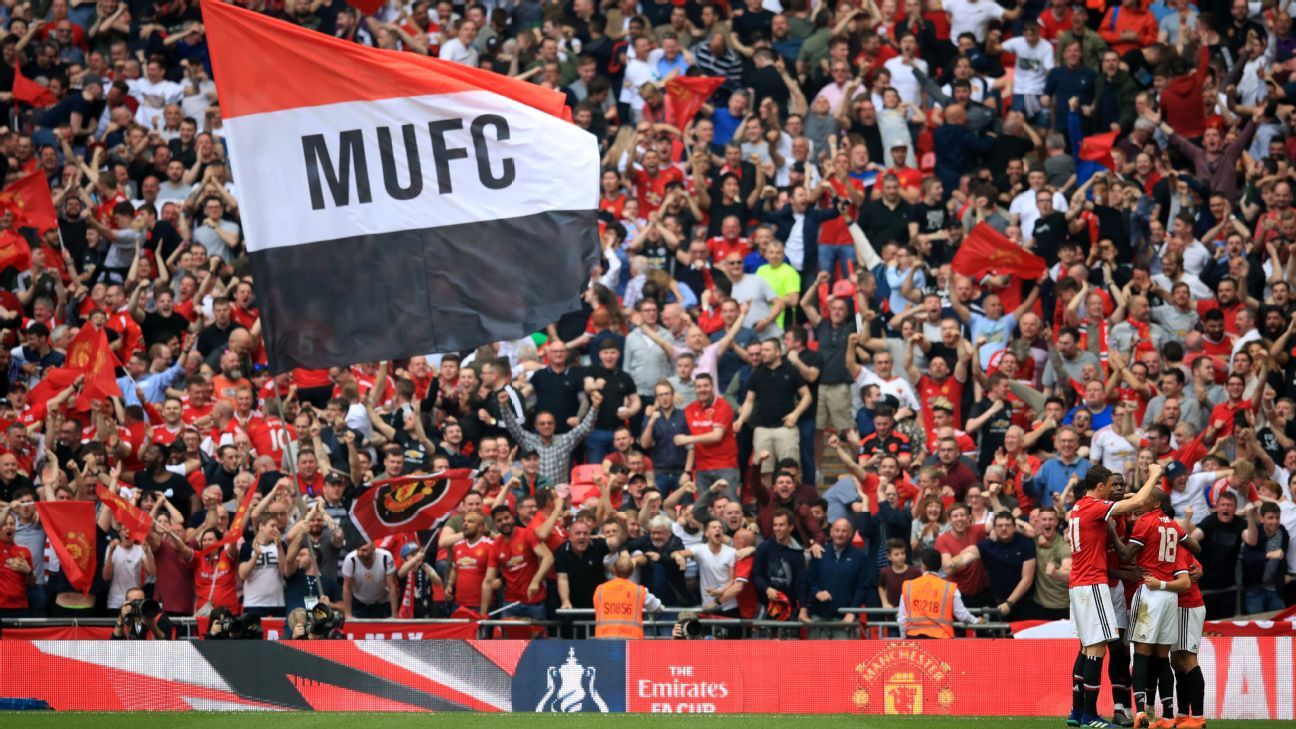 
London looked glorious in the sunshine on Saturday and the 40,000 Manchester United fans, who descended upon Britain’s capital, had a great day out. After a woeful recent run, their team needed to turn up in an away game vs. Tottenham and, though it took 24 minutes to wake up after going behind early once again, after an implausible Alexis Sanchez goal it was United all the way.

The reds inside Wembley were loud, with better organisation making a difference following positive communication between fans and the club. Vocal supporters stood together, while stick flags looked the part and Jose Mourinho was right to praise the atmosphere, just as he is right to criticise it so often at Old Trafford.

United’s FA Cup semifinal success can be added to the derby victory at Manchester City two weeks ago, the home win against Liverpool in March and the comeback vs. Chelsea in February. If you include a last-minute winner at Crystal Palace, as well as entertaining performances at Bournemouth on a warm spring evening and Everton on a freezing New Years’ Day, then that makes seven really good moments in 2018.

There were several more before Christmas and there might be another if United can beat Chelsea in the FA Cup final; they certainly owe their fans one after a shocking display in the 2007 final against the same opponents, then managed by Mourinho.

United have beaten all of their top-six rivals since December and, despite complaints about the style of football, those games have been exciting to watch, to attend and to celebrate. This is not the turgid fare dished up under Louis van Gaal. While still prone to frustrating setbacks that irritate the manager as much as any fan, this has been a decent season.

And, for the third year in a row, it will still be alive in mid-May. Granted, United might have reverted to being a cup side rather than one capable of challenging properly for the Premier League, but such competitions have their merits; few complained about visiting the beach in Vigo a year ago, nor sunny Stockholm for the Europa League final.

Defeat on Saturday would have brought untold criticism of Mourinho and his methods, yet once again he got the win he needed. It’s an art. Would you bet against him beating Chelsea on May 19? He’s still annoyed about Saturday’s matchwinner Ander Herrera being sent off at Stamford Bridge in last season’s FA Cup quarterfinal, where he felt his team were perfectly set up to get through.

Herrera is one of several players in good form; Paul Pogba and Alexis Sanchez and Phil Jones needed to shine at Wembley on Saturday and they did, which has United followers buzzing again: the FA Cup matters.

The only highlights for the first 20 years of my United-supporting life came in the FA Cup; it was a huge deal. We even have two winners’ medals in our family: One was awarded to flying winger Charlie Mitten, who played in United’s 1948 final win over Blackpool, and my uncle David has the other. A United fan, he was Wigan’s kit man when they beat Manchester City in 2013 and I swear he cherishes that medal as much as his children!

It’s a shame that not everyone present at Wembley on Saturday will be able to be at the final. A £65 seat for the semifinal, which is already more than twice the £30 maximum of the Premier League, will cost £115. To put that into context, it is an increase of 77 percent; the UK inflation rate in March was 2.5 percent.

Seats behind the goal, the ones that really make a difference to an atmosphere, are £115, a rise of £30 on the 2016 final. United might be a glamorous, high-end club with huge revenue streams, but that doesn’t mean most of their fans are similarly wealthy. It’s not acceptable, yet while many will complain on social media, little more will be done.

And even those that can afford it face an anxious wait to see if they get a ticket. United’s official allocation for the final will be 28,000, some 6,000 less than both clubs received on Saturday. Supporters, who should be rewarded for their support, will miss out because the Football Association considers the final a celebration of their organization; representatives of every club in the FA Cup will receive tickets to the game.

Some clubs generously pass on their allocations to those competing, but the fact remains that some United fans, who have been to every single home game this season, won’t be there. It happens elsewhere and drove France’s World Cup team crazy that the “suits” came out for the finals ahead of those who’d help them get there.

The new Wembley was built with the corporate pound in mind to help pay for the cost of construction, which totaled £757 million. While the venue is a huge improvement on the old stadium, it’s so big that the atmosphere struggles to carry around it, especially to vast upper tiers.

Arguments about cup-final ticket distribution are as old as the sun and players used to cash in on demand. In 1948, my uncle Charlie and his teammates made a mutually satisfactory arrangement with businessmen, who owned textile factories in the Cheetham Hill area of Manchester. United’s players were invited to choose cloth that would be made into dresses for their wives. In return, they tended to sort out the owners with tickets.

Recent cup trips to Wembley have been good for United, with seven consecutive triumphs since the 2011 Champions League final defeat vs. Barcelona. More of the club’s fans, as well as those of Chelsea, should have the opportunity to be in attendance for the next visit.