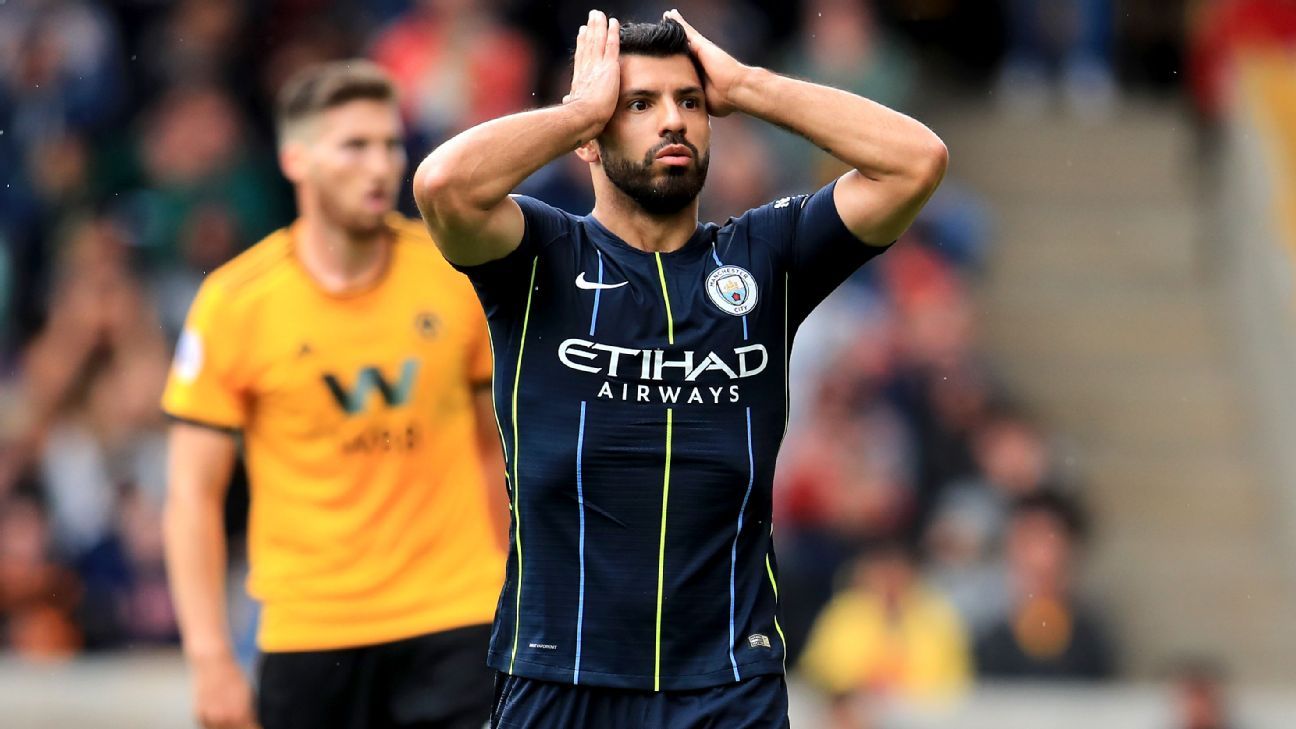 
Less than a month ago, Manchester City enjoyed a two-point lead over Liverpool in the Premier League table and boasted a superior goal difference of 15. Suddenly, they’re seven points behind the Reds, who are now level on goal difference, and City aren’t even in second after Tottenham overtook them by a point on Boxing Day.

City have endured a disastrous few weeks, losing three of their past four matches having previously remained unbeaten. But what’s the cause of their sudden slide? Five problems seem particularly crucial.

Manchester City’s two defeats in the Christmas period so far, a shock 3-2 reverse at home to Crystal Palace and a 2-1 loss at Leicester City, have been characterised by poor full-back performances.

The Palace game exposed the defensive limitations of right-back Kyle Walker, who enjoyed a fine 2017-18 but is seemingly suffering after his extended World Cup participation. He made a couple of mistakes in the previous weekend’s victory over Everton but was partly to blame for all three goals against Palace. First, he failed to stop Jeffrey Schlupp from firing a low shot into the corner, he clumsily gave away the free kick that indirectly led to Andros Townsend’s sensational long-range strike, and he conceded a penalty by fouling Max Meyer, which allowed Luka Milivojevic to put Palace 3-1 up from the spot.

Against Leicester it was Fabian Delph’s turn to be exposed. He completely lost Marc Albrighton for Leicester’s equaliser, and later, Hamza Choudhury flummoxed him with a very similar run, which suggested it might have been a deliberate Leicester tactic to target Delph’s inability to defend the far post.

Delph is, after all, a midfielder converted to a left-back, and while he is comfortable in possession, his body shape is often awkward when the ball is on the opposite flank and he’s meant to be tracking a runner. His late dismissal for a needless follow-through tackle on Ricardo Pereira, meanwhile, exacerbates Guardiola’s problem in that position.

With Benjamin Mendy already out, this leaves only Danilo or Oleksandr Zinchenko to face Mohamed Salah in City’s crucial showdown with Liverpool next week. Salah has generally been played up front this season, of course, but Jurgen Klopp has often gone 4-3-3 with Salah wide on the right in big matches. He’ll surely be tempted to use his most dangerous attacker against City’s problem position.

2. A lack of pressing

Pep Guardiola’s City have never been particularly adept at defending in deep positions, but they used to compensate with proactive defensive work in higher zones. The front three pressed aggressively, the midfielders pushed up onto their opposite numbers, and the defence kept a high line to compress play into the opposition half.

In recent weeks, even before this sudden poor run, it was notable that City weren’t engaging the opposition in such advanced positions. This was highlighted in a particularly prescient article by Mark Thompson at the start of December, when City were still recording consistent wins. It highlighted how opponents were increasingly being allowed to work the ball forward from their own third, which had significantly increased the workload on Fernandinho, the sole defensive midfielder.

It’s difficult to imagine that this has been a deliberate tactic. Fatigue is probably to blame. Notably, Liverpool have also pressed less in recent months than during Jurgen Klopp’s early days, but they also now appear better equipped to defend deep. Whether they want to or not, City probably need to keep pressing.

The fact that Fernandinho was forced to get through more work was, in itself, problematic. But the Brazilian is a truly exceptional all-around midfielder and has converted himself into the ideal player for this side. Naturally a technical box-to-box player, he is now excellent in a positional sense and capable of sweeping up behind his two midfield colleagues.

Without him, though, Manchester City don’t have a capable deputy. John Stones was used as the defensive midfielder against Crystal Palace but doesn’t seem happy receiving the ball in tight positions; City’s passing suffered as a consequence. Against Leicester, they had the reverse problem: Ilkay Gundogan is more positive and doesn’t have the natural defensive qualities.

Again, this relates to the previous point: When City were pressing high and playing in the opposition half, Gundogan was comfortable in this deep role. Now that he is forced to act as more of a traditional defensive midfielder, it’s more of a problem. The full-backs have taken up their “narrow” positions in City’s past couple of matches, an attempt to minimise the space the defensive midfielder is forced to cover, but those players are struggling anyway.

Guardiola was fully aware of City’s weakness in this deep midfield position in the summer, hence his pursuit of Jorginho, who eventually opted to follow Maurizio Sarri to Chelsea. It has taken half the campaign, but now the lack of a reliable backup feels particularly crucial.

For all Sergio Aguero’s achievements in a Manchester City shirt — three titles and more goals than anyone in the club’s history, including the Premier League’s most important goal ever — his spell with the club has been affected by injury. He doesn’t suffer major, long-term injuries, but he regularly suffers minor ones. The problem is not just that Aguero spends a few weeks on the sideline but also that when he returns, he takes a while to get back to full fitness.

Some players return to their full level immediately, but Aguero always looks particularly rusty, perhaps because his top-level acceleration is so dramatic and so devastating. Without that turn of speed, he looks awkward, and his touch deserts him.

That’s been notable in both City’s defeats this week. Against Palace, Aguero was introduced as a substitute early in the second half and didn’t attempt a shot. Against Leicester, he skewed Leroy Sane’s pull-back over the bar in the first half. After the break, he sliced a left-footed shot badly off-target and then, when a deflected cross fell almost perfectly onto his head 8 yards out, his attempt was badly misjudged and trickled fully 10 yards wide.

Aguero deserves credit for his clever touch to assist Bernardo Silva’s opener, but City fans have learned not to celebrate his return from injury as an event in itself: It’s usually a couple of weeks before he’s actually “back.”

5. A lack of tactical variety

Having chopped and changed formations throughout his first couple of seasons, Guardiola has regularly gone to a 4-3-3 this season, at least as his starting system. The only variations come out wide: He can deploy wide players on their natural sides or as inverted wingers, with the full-backs also varying their positions accordingly, moving inside or outside. Guardiola has tended to use a false nine only in the event of injury, and it has been rarer to see him using a midfielder in the front three, dropping back to provide extra numbers in the centre.

There’s a contrast from Liverpool’s evolution this season. Last year, Klopp solidly used the 4-3-3 with Salah on the right. This season, it has usually been 4-2-3-1 with Salah up front. Whether that system actually improves their attacking play is debatable, but it has certainly given the opposition another challenge: They never entirely know what system they’ll be facing.

It would be unreasonable to suggest that opponents have “worked out” Guardiola’s side, as their record this season is still sensational. But the more City use this system, the more opposition scouts can find weaknesses. Just as Antonio Conte’s 3-4-3 proved sensational at Chelsea for three-quarters of a season before suddenly losing its shine, perhaps a more obvious “Plan B,” in terms of system rather than style, is needed at City.

With Barca and Madrid in crisis, Clasico takes back seat to Champions League ties vs. Ukrainian opposition
Arsenal vs. Aston Villa – Football Match Report – October 22, 2021
Phil Foden gets 8/10 as Manchester City thrash Brighton on the road
Barcelona need Ansu Fati and he couldn’t be happier to be the new star to turn the club around
New England Revolution seal Supporters’ Shield as MLS best regular season team