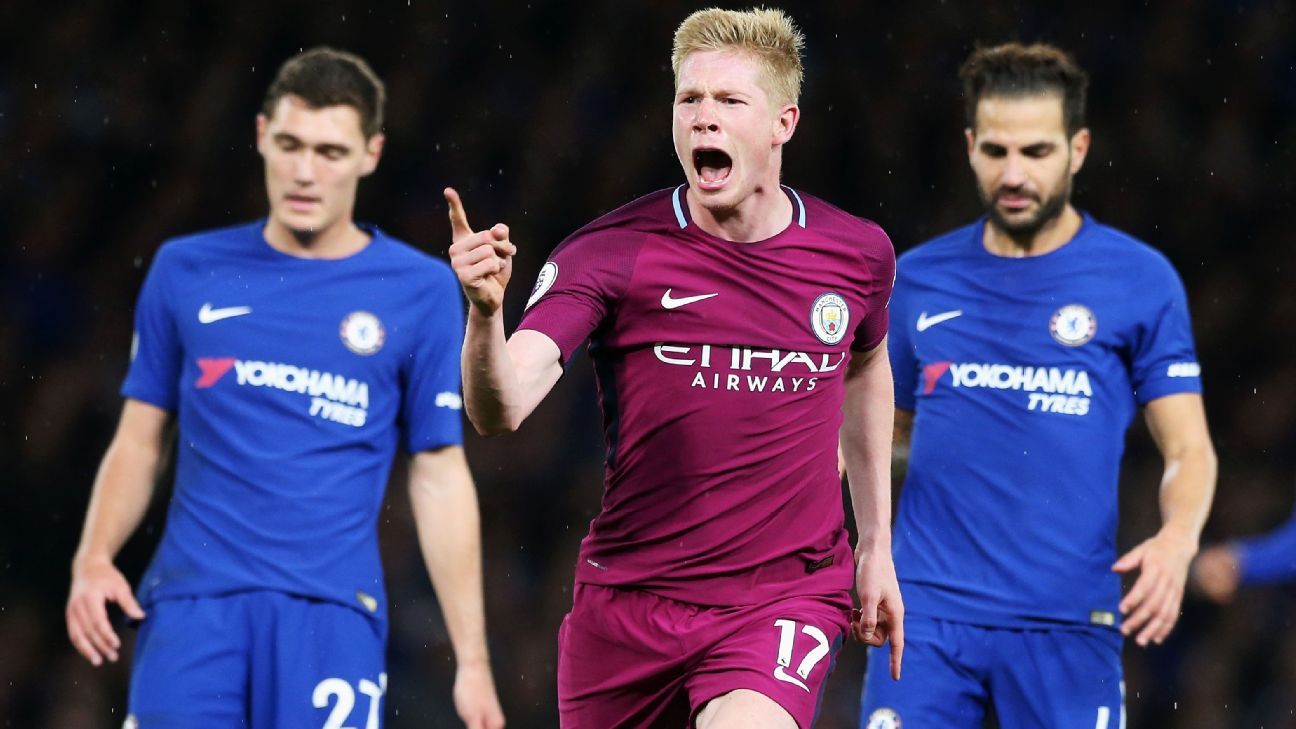 
Manchester City have won the Premier League crown with five matches to spare, making them the joint-fastest to clinch the title. Here are five key games that set Pep Guardiola’s side on the path to success:

City didn’t start the season in anything like the sort of form they were destined to spend the rest of it. An opening day win at Brighton, only secured after a late strike from Sergio Aguero and a Lewis Dunk own goal, was followed by a frustrating 1-1 draw at home to Everton when Kyle Walker was harshly sent off.

Guardiola’s side looked to be heading for yet another draw at Bournemouth in the third match of the season. An inability to turn tight games into victories had blighted Guardiola’s first campaign, and it would have seen them continue in the same way had they left the Vitality Stadium with only a point.

But Raheem Sterling scrambled in a 97th-minute winner, and although the England forward was sent off in the celebrations that followed, it proved to be a launchpad for a special season for both Sterling and City.

City’s first big test against a top-six rival followed the victory against Bournemouth, and it gave another huge confidence boost to a young team.

In his first season, Guardiola had just two victories against title rivals and had taken only two points in games against Chelsea, Tottenham and Liverpool, which seriously undermined their Premier League hopes.

This time, Liverpool were blown away at the Etihad Stadium, although they didn’t help themselves when Sadio Mane was sent off in the 37th minute for a high challenge on goalkeeper Ederson, who was taken off with nasty facial injuries.

City were already ahead by that time through Aguero’s neat finish and ruthlessly destroyed Liverpool in the second half to inflict Jurgen Klopp with his worst defeat as a manager.

The buildup to the game was dominated by how City would cope without striker Aguero, who had fractured ribs in a car crash in Amsterdam shortly before the game at Stamford Bridge.

The answer was emphatic as City dominated at the home of the Premier League champions, controlling the game from the first minute and not offering Chelsea a sight of goal until a late chance in the dying minutes.

Kevin De Bruyne was the standout performer on a return to his former club, dictating City’s attack before making the breakthrough with a brilliant individual goal when he lashed in a 20-yard left-foot drive.

It was a win that saw City move back to the top of the table, but more crucially it was a significant result and performance at the home of the club that had dominated the Premier League the previous season.

Jose Mourinho all but conceded the title after the first Manchester derby with five months of the season remaining as City moved 11 points clear at the top of the table.

Once again, Guardiola’s side were superior despite the slim margin of victory, although they were grateful for sloppy defending by Romelu Lukaku, which gifted goals to David Silva and Nicolas Otamendi either side of half-time.

It was City’s 14th consecutive victory — a new Premier League record — and one they would go on to extend by another five matches. City’s noisy celebrations in the dressing room after the game irked Mourinho and his side, prompting an altercation between a small number of players and staff.

But realistically, every person in that tight corridor outside the Old Trafford dressing room knew City had effectively taken a huge step towards the title that day.

After their derby day victory, City delivered a comfortable midweek win against Swansea City that was followed by the visit by Spurs — a team that Guardiola had struggled with in his previous season.

There was the possibility that they could suffer a hangover after moving 11 points clear at the top of the table and breaking the record for successive victories.

But there was no such luck for Spurs. City were at their thrilling best as they devastated the visitors, and the only surprise was that with 20 minutes remaining, they only led through Ilkay Gundogan’s header.

De Bruyne was brilliant yet again and was fortunate to escape injury after a horrible lunging tackle from Tottenham’s Dele Alli. The incident appeared to rile the Belgian, who drove City forward time and time again and eventually smashed in an unstoppable second. Sterling added two more late on as City again underlined their dominance of the Premier League.