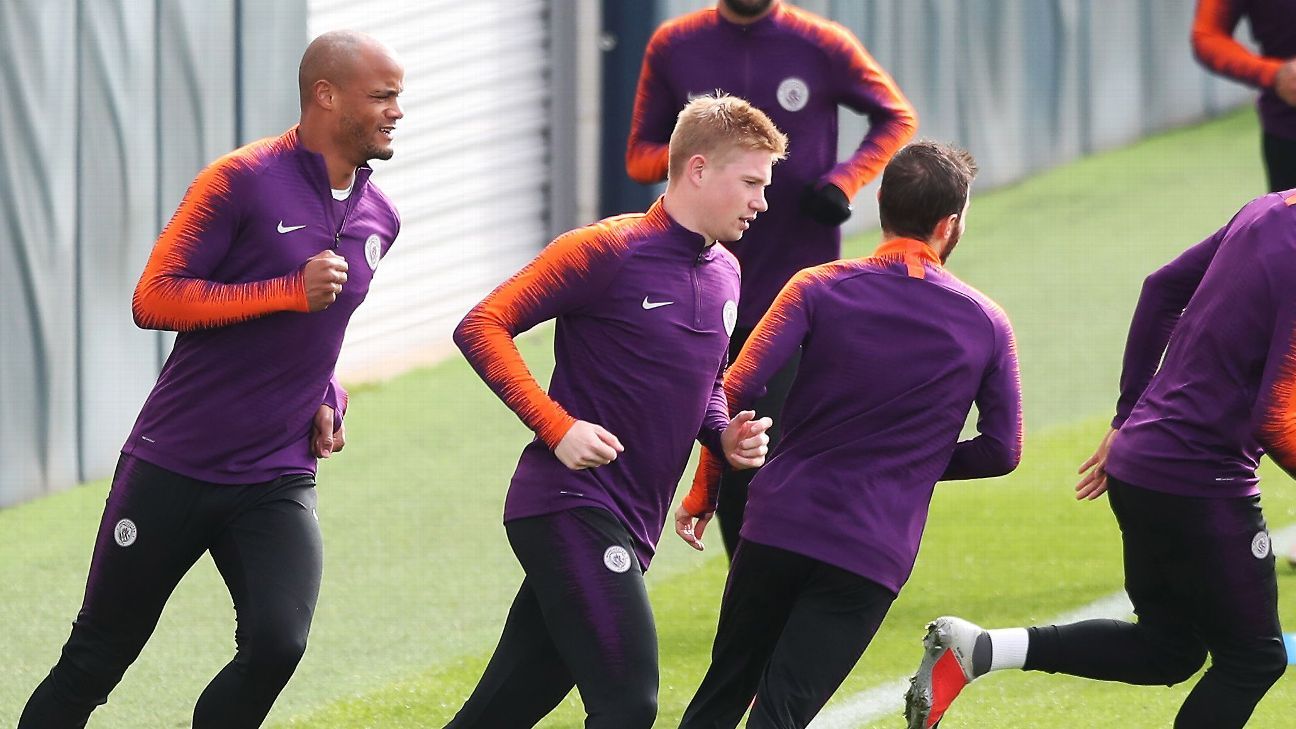 The Belgium midfielder was not expected to return until after the international break after damaging his cruciate ligaments in August but he returned to first team training last week and could be in the squad for Sunday’s top-of-the-table clash with second-placed Liverpool.

Defender Benjamin Mendy, who has missed the last six games with a bruised metatarsal, is also in contention but Fabian Delph and Ilkay Gundogan are set to miss out.

“We will see tomorrow,” he told a news conference when asked about De Bruyne playing at Anfield. “He’s training with us, yeah.”

The defending champions go into the game top of the Premier League, above Liverpool on goal difference, but on the back of three successive defeats to Jurgen Klopp’s side.

City also have a dreadful record at Anfield having lost 12 of their last 17 visits, with their last away victory in 2003.

But, despite that, Guardiola said City will go out on the attack.

“I never understood going in the bigger stages like that and try to just defend or just to… that is not going to happen,” he said. “We are not going to defend. I am not expecting what happened in Napoli where they have one shot, it won’t happen at Anfield. They will have shots on target. In Anfield you have to minimise that in the best way.

“We have to defend when they are better, we have to defend but not in the mentally approach — first because it’s boring, secondly because we didn’t build the team in that way, to propose to be active, to be ourselves, and always what I want from my teams in these kind of games.

“Like what happened many times, and we did it many times in the biggest stages, in the Premier League and in Europe, is to be ourselves in terms of personality and after when that happens if we lose congratulations Jurgen and his side and improve, but I will try to convince my players to be ourselves even in Anfield.”

It is a dangerous approach with Klopp having a better record against Guardiola going back to their time when they were rivals at Bayern Munich and Borussia Dortmund — winning half of their 14 encounters and drawing two more.

And that record has led to some pundits claiming that Klopp has worked out how to beat Guardiola sides.

“Good, congratulations, they are right,” he said. “So we won the Premier League. They are a top side even if we win, the way they play.

“Liverpool beat us they beat a lot of teams not just Manchester City. Liverpool is one of the two greatest teams in England and that’s why we tried to be close with them in terms of many, many things and we are closer. They are a top side.”

Much of the focus ahead of the game will focus on the arrival of City’s bus after it was pelted with bottles and cans when they played at Anfield for their Champions League quarterfinal first leg in April.

City have taken extra security measures, fitting cameras to the coach, while some travelling fans are considering lining the route to the stadium to protect the coach.

“I think the best way to protect the bus is down to the Liverpool fans who are there,” Guardiola said. “The best way is that when the people arrive at the stadium, going to see football game and enjoy watching both sides, that is the best way.

“The best way is that we should not need the police. Why should the police need to be there? For what? We arrive there, both sides, to play a Premier League game.

“Why should our fans have to protect our bus? Are you kidding me? Fans are going.

“I would like the police to go home at 4.30pm with their families, drinking a beer and loving the show, that is what they should do. But that depends on the Liverpool people, none on Manchester City.”