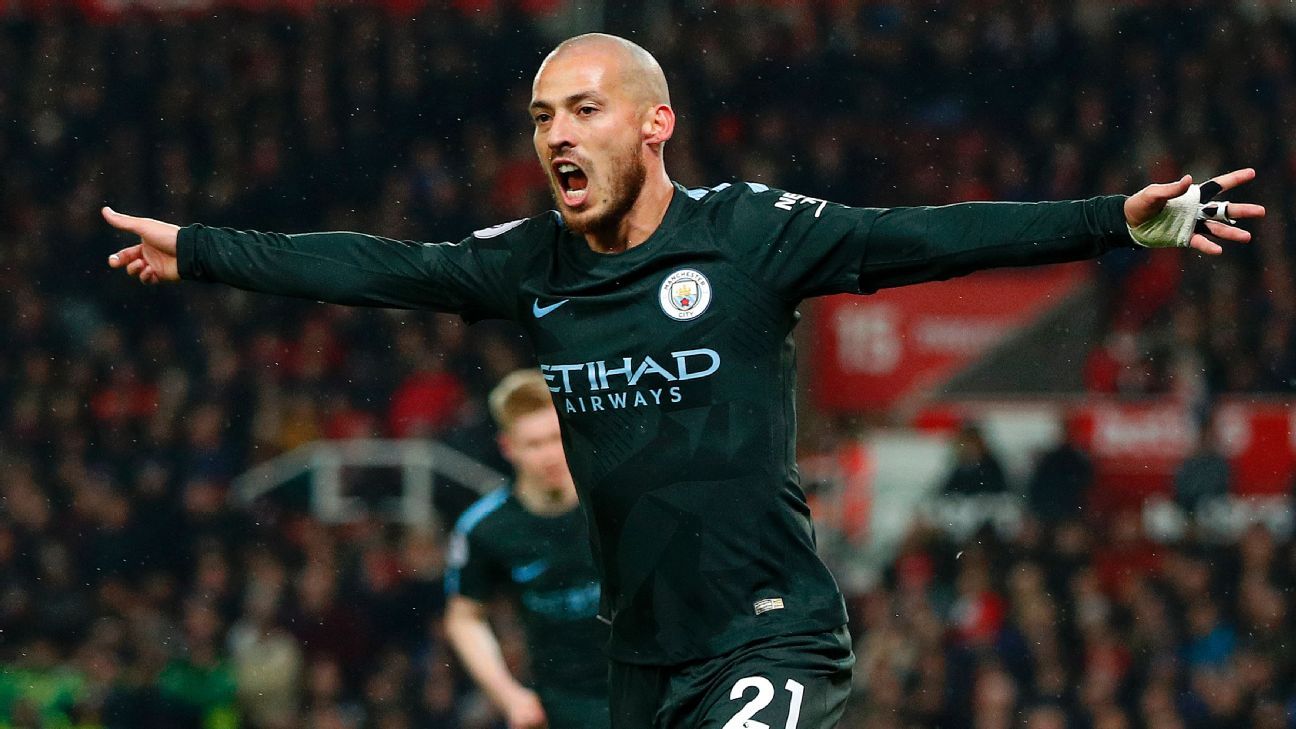 
It was, Kevin De Bruyne argued, trying to compare the incomparable. It is a challenge for every professional footballer. When they come to vote for their player of their year, the decision may come to two names: De Bruyne and Mohamed Salah, one top of the leaderboard for assists, the other the leading scorer. Whoever loses can deem himself unlucky.

There is a left-field theory that David Silva represents the champions elect’s best candidate, though if he attracts too much support, it could simply split the City vote and ease Salah’s path to victory. Certainly, the Spaniard has been their form midfielder of late, scoring in successive games against Arsenal, setting up Bernardo Silva’s winner against Chelsea, delivering both goals at Stoke, providing two against Everton and, but for some wayward finishing from Raheem Sterling, he would have had a further two assists against Manchester United. He has delivered at a time of personal difficulty, given the health problems of his young son.

A more outgoing character would have been more open about it. That is not Silva’s way. He is too understated, too unflashy and too unassuming to command the limelight. There are times when he has been too infrequent a scorer to capture enough headlines. There is the sense, too, that he is a purists’ player and purists will always be in a minority.

Yet the counterargument is that his impact should be measured over a career, not a campaign. There may not be a season when he has been the outstanding individual, a title that belongs to either Salah and De Bruyne this year, though the Spaniard has been consistently excellent throughout his City career.

But there ought to be recognition of some sort. Ryan Giggs claimed the PFA prize in the 2008-09 campaign when he only started 15 games; it had the feeling of a lifetime achievement award under another name. The Welshman was also named the division’s greatest player in its 20 Seasons Awards in 2012.

If that had the feel of an artificial honour, a contrived prize, the truest appraisal of Silva’s efforts and excellence may be to say that he deserves another. He has been the Premier League’s player of the decade, the best player of the 2010s. The case is partly statistical, partly stylistic. Either way, his impact has been considerable. City have won the most points and will soon have the most titles since his arrival in England in 2010. He has been their most consistent and classiest player during time frame.

A very unEnglish player has flourished, bringing about an evolution in the game that has gathered pace under Pep Guardiola. Three of the most watchable, most impressive sides of that period have been City’s: the 2011-12 title winners, the 2013-14 side who scored 156 goals in all competitions and the current crop. Silva has been a common denominator in stylish demolitions. Arguably, too, the beneficiary of many of his most incisive passes has been the division’s second-best player of the decade: Sergio Aguero, scorer of an unparalleled 143 Premier League goals in the 2010s but a player who has never even been voted into the PFA Team of the Year, let alone granted the individual prize.

Annual awards can go, often deservedly, to those who have had one exceptional season, such as the Leicester pair of Jamie Vardy and Riyad Mahrez in 2015-16 or Salah this season, though the Egyptian looks a player with the potential to extend his excellence over many a campaign.

His spell at Anfield is obviously too fleeting to qualify for a decade-long award. Others have peaked in the Premier League for periods within that timeframe — Harry Kane, Luis Suarez and Robin van Persie, for different reasons, are cases in point — but not all of it. Yet any temptation to say Silva and Aguero are frontrunners by default should be resisted.

Consider the context. Were there a Premier League Player of the 90s award, it would probably be contested by Eric Cantona, the catalyst for the reshaping of the division’s pecking order, and Alan Shearer, its most relentless ever scorer, though the conversation would also have to include Giggs, Roy Keane, Peter Schmeichel, Dennis Bergkamp and Gianfranco Zola.

Were there one for the 2000s, the favourites would be Cristiano Ronaldo and Thierry Henry, with the Frenchman meriting the award for sustaining superlative levels for longer, though Giggs, Wayne Rooney, Patrick Vieira, Steven Gerrard and Frank Lampard would also have to come into consideration.

All of which indicates the kind of company Silva ought to keep in the Premier League pantheon. Over seasons, others may have stood out more. Over an era, he has been incomparable.