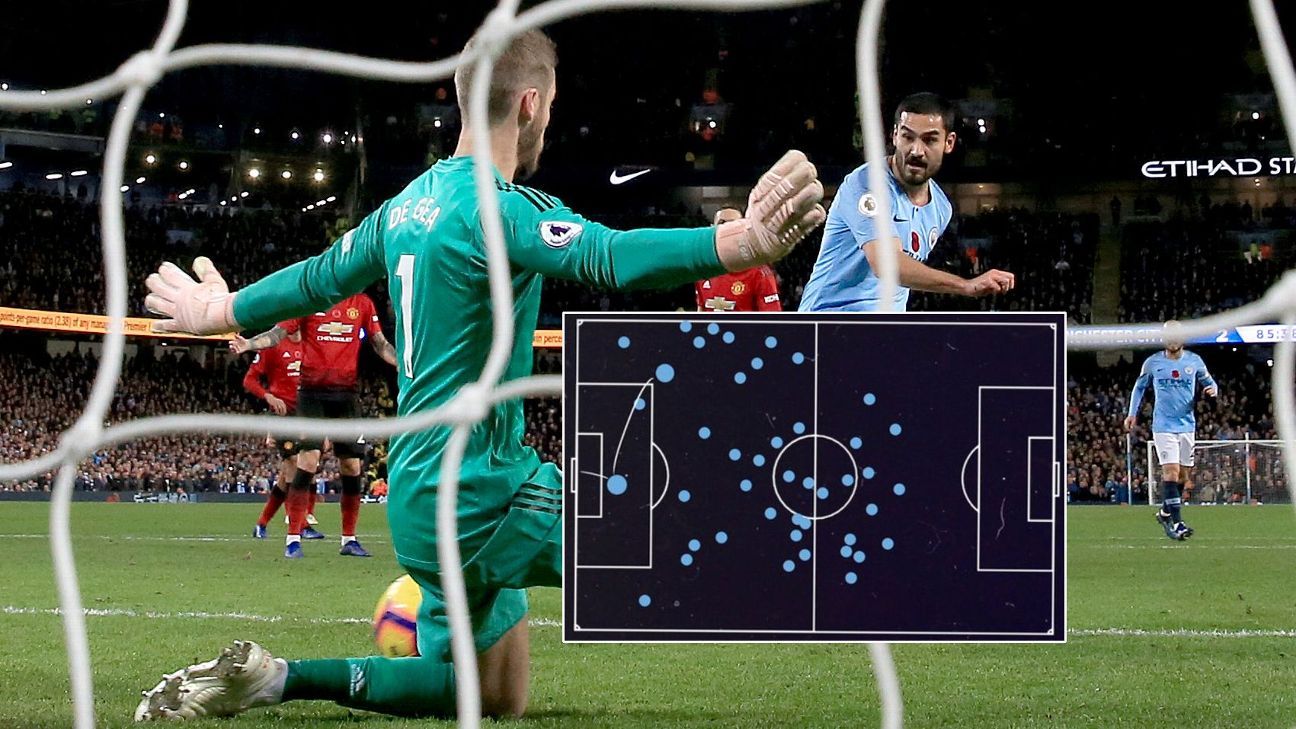 
As if to rubber-stamp their derby day dominance, Manchester City wrapped up Sunday’s 3-1 derby win over United with a devastating team goal in the closing stages at the Etihad Stadium.

Ilkay Gundogan was the man to apply the finishing touch to a sublime 44-pass manoeuvre that took City from their own half to the back of United’s net over the course of one minute and 55 seconds.

To put that in some kind of perspective, here are some other things that can be done in that time, or even quicker.

One of the most famous comebacks in football history, United themselves took just 1:41 to score twice in the dying seconds of the 1999 Champions League final (90:36 and 92:17) to overthrow Bayern Munich.

Alternatively, in the same amount of time Paul Pogba could do 11-and-a-half of his strange tip-toed penalty run-ups (which, last month, inspired the hashtag “#ThingsYouCanDoDuringPogbasPenaltyRunUp” from his United teammate Luke Shaw).

Indeed, in the time it took City to piece together their move at the Etihad, you could watch one of Pep Guardiola’s motivational half-time teamtalks from their recent documentary series (1:09).

Theoretically, at his world-record pace (100 metres in 9.58 seconds) Usain Bolt could run a full 1.2 kilometres in the time it took City to apply the coup de grace to United. Just watch this clip on repeat 12 times to get the effect.

You could complete a lap of any track on the Formula 1 calendar with Mercedes driver Valtteri Bottas clocking up a fastest lap at Belgium’s Spa circuit — the longest to complete at 7.004 km (4.352 miles) — of just 1:46.286 earlier this season.

Depending on the format of the match (Test, one-day international, Twenty20) and the style of the bowler (pace, spin etc.), you can usually expect a six-ball over in first-class cricket to take anywhere between four and six minutes. However, while playing Sussex in in 2007, Yorkshire rushed through more than five overs in eight minutes in a desperate bid to avoid being punished for a slow over rate. In that breathtaking spell, Younis Khan — more known for his batting — bowled six deliveries in 35 seconds. So the Pakistan legend would not struggle to bowl three full overs in a cricket match in the allotted time.

If Pep’s own half-time words weren’t inspiring enough, you could always watch President Thomas J. Whitmore (AKA Bill Pullman) and his rousing call to arms from Independence Day (1:28) instead.

You could listen to the whole of White Stripes’ garage-rock anthem “Fell In Love With A Girl” (1:50). Or play Jay-Z’s “Beach Is Better” (0:55) twice from beginning to end.

Depending on your Nintendo Gameboy prowess and penchant for cheats, you could “complete” the whole of the original Pokemon Yellow.

If you wish to obliterate your digestive system in one fell swoop, you could attempt to see off “Burritozilla” —  a colossal 18 inches of tortilla wrap filled with five pounds of rice, beans, meat, cheese, salsa, sour cream, guacamole, etc, etc — that was demolished by YouTube eater extraordinaire Matt Stonie in 1:50.

Or, if you want to keep it food-related but have something other than dangerous cholesterol levels as your reward, you could make an attempt to beat the officially recognised Guinness world record fastest time for opening 100 mussels (1:55.28) — the same time as it took from Fernandinho winning the ball to Gundogan beating David De Gea.

The final goal of a testing afternoon for United may have been a morale-sapping blow for United, but it’s not all doom and gloom: City completed the most passes in the build-up to a goal in the Premier League since… Juan Mata’s goal for United against Southampton in September 2015 (45).