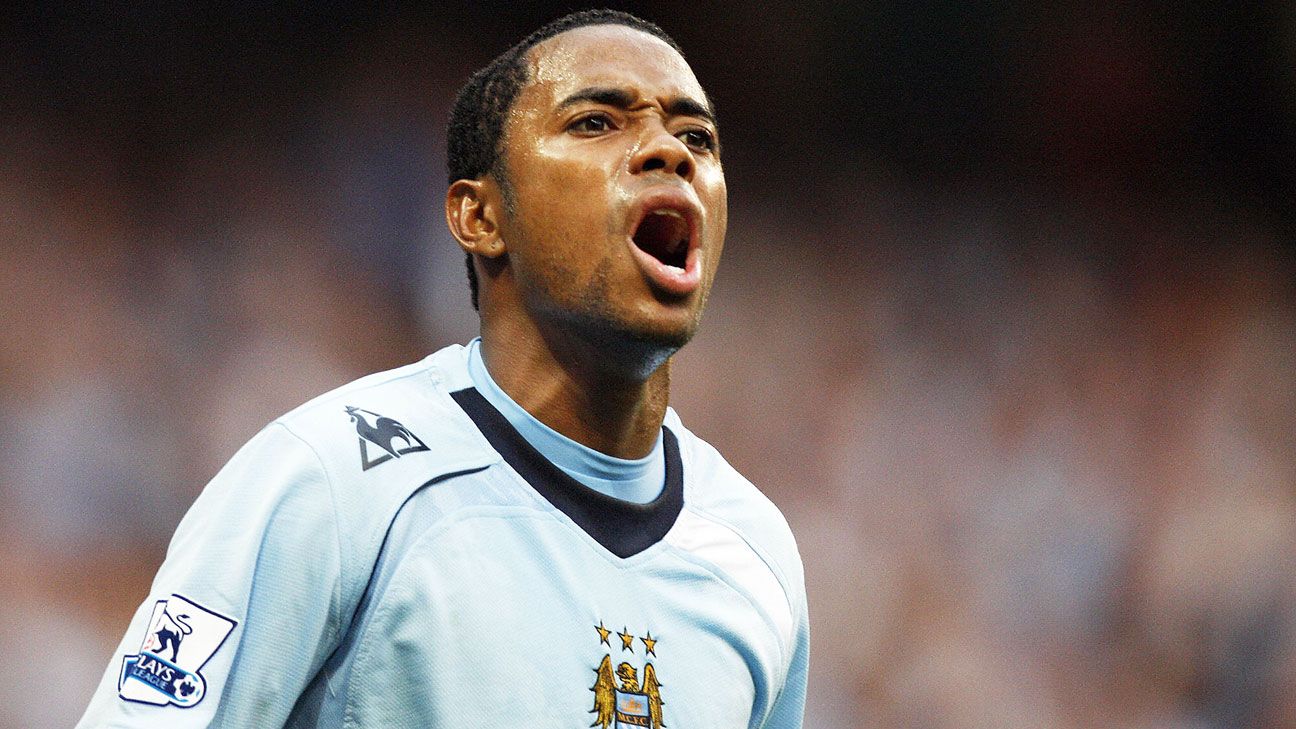 
Manchester City have been transformed beyond recognition by the takeover of Sheikh Mansour. More than a decade of Abu Dhabi ownership has yielded 11 major trophies, including four Premier League titles, and more than £1.5 billion spent on players.

It began with a bang on Sept. 1, 2008 when the Abu Dhabi Group agreed to buy City from Thaksin Shinawatra and on the same day spent a club record £32.5 million to sign Robinho from Real Madrid. But success wasn’t instant and, on May 24, Mark Hughes’ side ended the 2008-09 campaign with a 1-0 win over Bolton Wanderers at the Etihad Stadium to finish 10th in the table — 40 points behind champions Manchester United.

On the anniversary of that final game of their first season under Abu Dhabi control, here’s a look at what happened to the squad at that time.

GK: Shay Given: Having left City after three seasons in 2011, the Republic of Ireland international goalkeeper had spells at Aston Villa, Middlesbrough and Stoke before retiring in 2017. Now he is the head goalkeeping coach at Derby County.

GK: Joe Hart: Departed in 2018, after two years of loan spells with Torino and West Ham, but is still playing for Burnley — though he hasn’t made a Premier League appearance this season.

DEF: Micah Richards: Announced his retirement in July 2019, after a four-year spell with Aston Villa, aged just 31. Now working as a pundit for the BBC and an ambassador for City.

DEF: Javier Garrido: The defender signed from Real Sociedad after leaving City in 2010 and had stints at Lazio, Norwich City, Las Palmas and AEK Larnaca. Now 35, he still turns out for Spanish third-tier side Real Union.

DEF: Nedum Onuoha: Left for QPR in January 2012 and played against his former club in the game which clinched a dramatic title for City on the final day of the 2011-12 season. Has featured for MLS side Real Salt Lake since 2018 and hit the headlines for his clash with Zlatan Ibrahimovic last year.

DEF: Richard Dunne: City’s captain left the club in 2009 and ended his playing career in 2015 after a spell at QPR. He now lives in Monte Carlo while occasionally travelling back to Ireland to work as a pundit.

DEF: Pablo Zabaleta: Still playing in the Premier League for West Ham at the age of 35, having left City in 2017 after over 300 appearances.

DEF: Wayne Bridge: Hung up his boots in 2014 after spending the latter part of his career on loan, married The Saturdays singer Frankie Sandford and was a contestant on I’m a Celebrity Get Me Out Of Here in 2016.

One of the greatest experiences of my life @imacelebrity 🐍🦎🦗#tbt #throwbackthursday pic.twitter.com/U0HRAAh12C

DEF: Shaleum Logan: Only made three appearances for City. Now 32, the right-back has been playing for Aberdeen since 2014 after a spell with Brentford and is training to become a plumber.

DEF: Vincent Kompany: Left City in 2019 as one of the club’s most successful ever players and took up a player-manager role at Anderlecht. After the club’s worst league start since 1998-99 he stepped down from matchday duties, with ex-Man United midfielder Simon Davies taking over and handing Kompany the captain’s armband. Belgium became the first European top-tier league to cancel the season due to the coronavirus outbreak, with Club Brugge crowned league champions and Anderlecht finishing in eighth.

DEF: Tal Ben Haim: Cost £5m in the summer of 2008 but was quickly moved on to Sunderland after just one season. At the age of 38, he is still playing in his native Israel for Beitar Jerusalem.

DEF: Glauber Berti: Only ever made one appearances for City, on the the final day of the 2008-09 season, but still managed to become a cult hero. Retired in 2013 after a short spell with MLS side Columbus Crew and now works as an agent in Brazil.

DEF: Michael Ball: The injury-prone defender left City in 2009, signed for Leicester City in 2011 and was found guilty by the FA of sending an anti-gay tweet to a soap actor in 2012 for which he received a fine of £6,000. His contract was terminated shortly afterwards after making only three appearances.

MID: Michael Johnson: Once tipped to be an England star, injuries and off-field problems — which included battles with his weight and mental health — cut short the midfielder’s promising career in 2012. After he was released aged 24, he retired and opened a series of businesses in Manchester.

MID: Gelson Fernandes: The 33-year-old Switzerland midfielder has been playing for Eintracht Frankfurt in Germany but announced he will retire at the end of this campaign.

MID: Kelvin Etuhu: Has been at League Two side Carlisle since 2017 but they announced the 31-year-old midfielder will be released at the end of his contract in June.

MID: Dietmar Hamann: He retired from playing in 2011, after just under a year as a player-coach at Milton Keynes Dons, and then had an ill-fated spell as manager of Stockport County. Came out of retirement at 41 to play for amateur German club TuS Haltern but is now a writer and broadcaster.

MID: Stephen Ireland: He joined Bolton Wanderers in October 2018 but left just two months later without playing a game after his contract was cancelled. Still looking to play at age 33, he runs his own management company which includes his two sons, who are on the books at Stoke.

MID: Elano: One of City’s best players in their early days, the midfielder left for Galatasaray in 2009, spent time in Brazil and India and ended his playing career back in 2016. He is now in charge of Brazilian side Inter de Limeira, having been appointed in August after being sacked by Santos.

MID: Nigel de Jong: Part of City’s title-winning squad in 2012, the Dutchman left the club that summer and has since had spells in Italy, America, Turkey, Germany and Qatar, where the tough-tackling midfielder now plays for Al-Shahania aged 35.

FW: Vladimir Weiss: The winger turned 30 in November and, after time in Italy, Greece and Qatar, he is back in Slovenia playing for Slovan Bratislava.

FW: Shaun Wright-Phillips: After a four-year spell at QPR, he moved to MLS in 2015 to play for the New York Red Bulls and then joined United Soccer League’s Phoenix Rising FC before announcing his retirement in August 2019 at the age of 37.

FW: Robinho: Now 36, the Brazilian has been in Italy, China and back in his homeland since leaving City in 2010, but has found a new lease of life in the Turkish Super League with Istanbul Basaksehir where he counts Gael Clichy, Demba Ba and Martin Skrtel as teammates.

FW: Martin Petrov: The winger played for Bolton Wanderers and Espanyol after leaving City in 2010 before ending his career in Bulgaria with CSKA Sofia in 2014.

ST: Valeri Bojinov: At the age of 34, the Bulgarian striker is playing for Pescara in Italy’s Serie B, having had a lot of different clubs since his exit from Manchester in 2009.

ST: Felipe Caicedo: The Ecuador international only spent two seasons at the Etihad — and scored the only goal in the game against Bolton — but is still playing regularly for Lazio in Serie A at the age of 31 and has scored eight goals this season.

ST: Ched Evans: The Welshman spent time in prison for alleged rape before the conviction was quashed and he was acquitted at a retrial in 2016. He now plays for Fleetwood in League One under former Man City midfielder Joey Barton.

ST: Daniel Sturridge: Played for Chelsea and Liverpool but failed to cement his place and was released by Turkish Super League club Trabzonspor in March after being handed a four month ban from football for breaching betting rules. Has been linked with a move to MLS this summer.

ST: Craig Bellamy: Left City in 2011 for a move to Liverpool and played for Cardiff before he retired in 2014. The combative Welshman is now a coach under Kompany at Anderlecht.

ST: Darius Vassell: Mobbed by 3,000 fans of Turkish club Ankaragucu in 2009 when he signed for them, the striker left after a year to move to Leicester and played his last game as a professional in 2012 aged 31, but didn’t officially announce his retirement until 2019. Currently a coach in Wolves’ youth academy.

ST: Benjani: Spent time at Blackburn and back at Portsmouth after he departed City in 2010 and ended his career in South Africa with Bidvest Wits four years later. Received a heroes welcome when he returned to the Etihad for Kompany’s testimonial in September.

ST: Jo: The Brazilian striker was signed for a club-record £19m in 2008 but only scored six goals. He spent time in China, Brazil and UAE but, now 33, is scoring goals in Japan (25 in 37 games last season) for Arsene Wenger’s old club Nagoya Grampus.