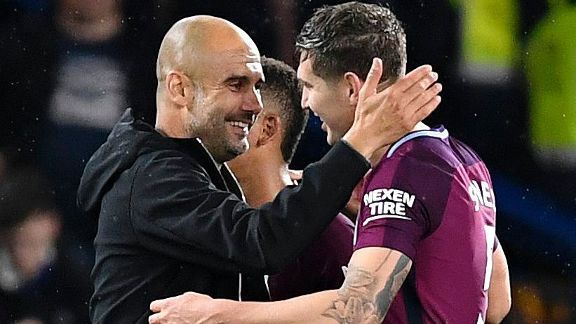 
On the face of it, Manchester City’s 1-0 victory at Stamford Bridge last Saturday evening was an excellent performance and a statement of intent for the rest of the Premier League. It showed what Pep Guardiola and his team are looking to achieve this season, and it was a no-nonsense, turn-up-and-get-the-job-done display. He took his side to one of the toughest grounds in the league, got his tactics spot-on and comfortably outplayed the hosts.

However, in the context of what’s gone before it for City — in Guardiola’s first year at the club and in Manuel Pellegrini’s final two seasons at the Etihad — the victory on Saturday goes a lot further than that. It’s the latest step in the manager’s bid to change the club’s mentality.

Guardiola believes that for City to be considered one of the elite, they have to stop looking for excuses and get on with the job, whatever the circumstances. They had the perfect opportunity to fall ahead of the trip to Stamford Bridge, with three key players injured: Vincent Kompany, Benjamin Mendy and Sergio Aguero. It would have been easy for the manager to abandon the style of play that’s proved so successful to this point this season and to take a more pragmatic approach facing the champions.

Bullish and steadfast in his beliefs, Guardiola was never going to try to stifle Chelsea in the traditional way — by defending deep and hitting them on the break. In his view, City are a top team, and they don’t change for anyone, even the champions on their own ground. “We’ll go there and play the way we’d have done it with Sergio, Kompany, Mendy,” he said before the game.

While they might have tweaked their game plan a little — it’s hard to believe Mendy would have played left-back in the same manner as Fabian Delph did, for instance — the manager made no sacrifices to account for the unavailable players. The principles stayed the same: Play a high line, press the opposition defence, keep the ball on the floor and be proactive.

The aggressive nature of City’s defending was key. They stepped up to win the ball back quickly, rather than staying tight and compact to cut out the spaces Chelsea wanted to exploit.

Many expected the visitors to struggle, especially following Aguero’s injury in a car crash two days before the match. However, it was the hosts who were consistently on the back foot in one of the most humbling displays of the season so far.

Chelsea didn’t play particularly badly. Instead, City stopped them from playing at all, with a sort of controlling performance that they have rarely managed on the big occasions, even in the years when they’ve gone on to win the league. Along with the 5-0 victory over Liverpool, this is the sort of showing that demonstrates the big-club mentality the manager craves.

All clubs have to face injury problems. All clubs have to deal with poor referee decisions. The best will knuckle down and get on with the job in the face of it. In the past, when faced with these sorts of setbacks — especially in the Champions League — City have been guilty of feeling sorry for themselves.

Their record in the big games over the last three seasons has been woeful. City didn’t beat a team that went on to finish in the top four in either of the last two campaigns, taking just two points from a possible 18 from their rivals each time. The last time they beat a team that finished in the top four was in November 2014, a dogged 1-0 success over Manchester United — though you suspect that will probably change this season following wins over Liverpool and Chelsea so far.

For years, it was as if the team were intimidated when the going got tough. Now, though, it’s suddenly City doing the intimidating, and the big-club mentality is finally shining through.

The victory at Stamford Bridge lays down the foundations for change at City. If they can go to one of the most difficult away grounds in the Premier League without three key players, control the game and win in style, then they can do that at Anfield, The Emirates or Wembley.

While there have been some impressive showings from City this season, none have had the effect that the victory at Chelsea will have done. If they want to be considered a big club, then City have to overcome setbacks on the big occasions. So far this season, that’s exactly what they’ve been doing.