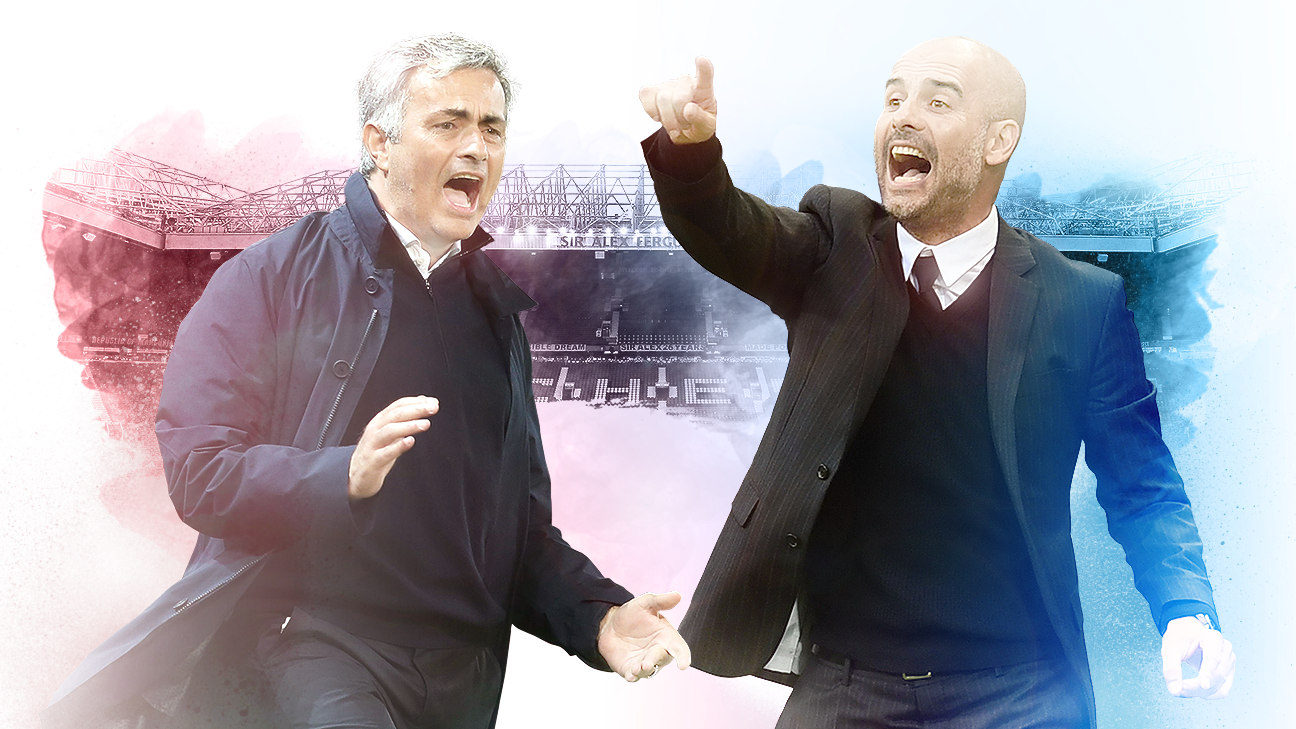 
It’s Manchester United’s worst nightmare — Manchester City will be confirmed as champions if they win the derby on Saturday evening.

Pep Guardiola’s men have swept all before them in the Premier League this season, with Jose Mourinho’s side well off the pace in second place.

Scott Patterson (United) and Simon Curtis (City) discuss the showdown at the Etihad.

1. How would it feel if City won the league on Saturday?

Simon Curtis: Invigorating. The evolution from absolutely dreading derby days to positively encouraging them to arrive more quickly and frequently has been a singularly odd experience. This weekend’s game offers the unique opportunity to actually clinch the title while our red friends look on from very close by. The debacle at Anfield means it has become extra important to bring home the trophy in style. There will be many who remember the Stretford End ticker and wish to rub United’s noses in it, but it should simply be a grand occasion to share with our slightly less noisy neighbours.

Scott Patterson: Horrible. United supporters have spent decades laughing at City, and this would be a huge taste of our own medicine. Having their players and fans rub it in our faces would be pretty sickening. It’s been five years since United have been able to celebrate winning the league, so to watch City enjoying it first hand would be pretty horrific. If it doesn’t happen this week, it’ll likely only mean it happens next week, and that would be far more preferable. But City are still winning the league regardless, which obviously we never want to see happen, whether it’s this weekend or next.

2. How would Saturday compare to City’s last-gasp title win in 2012?

SC: I’m afraid nothing can or ever will compare to that afternoon in 2012. The best scriptwriter in the business would have his/her work cut out producing a more memorable day at the football. It is sad in a way that City fans have probably already experienced the ultimate day of football-related emotion. Only a Champions League final victory against United, in some unimaginably extreme conditions, could possibly come close.

SP: 2012 will always be worse. Having started the day believing we had no chance of winning the league, United were seconds away from doing it for a second consecutive season, before it was snatched away. If City win the league against United on Saturday it would be more embarrassing than painful, although that’s not saying it won’t hurt. It would be a moment they’d never let us forget, but it’s not the same as losing out on the title yourself.

SC: You have to do what is possibly beyond United: Throw everything but the kitchen sink. Liverpool surprised City in the 4-3 league win, then managed to impose a more clear-cut drubbing at the second time of asking on Wednesday. United do not play anything like Liverpool and would have great difficulty attempting to copy that style. On top of that it is an away game for them, their manager is cautious by nature and they will almost certainly want to contain City first, rather than risk being overrun on the counter. The prospect of attending what could become City’s title party is bad enough without being buried under a heavy score before it all kicks off.

SP: If Liverpool’s 3-0 win against City in the Champions League is anything to go by, Mourinho should go for it and attack them. City’s defence looked shocking in their defeat on Wednesday. United beat this Liverpool side a couple of weeks ago, so there’s no reason why they can’t go and beat City, too. In the derby at Old Trafford, after City took the lead, United threw everything at them and equalised. It took them minutes to get back in to the game. Then, Mourinho held them back again and United went on to lose. You can’t imagine the manager is going to instruct his players to go for the kill, but if he sets them up to just absorb pressure, with the defence United have, it will mean relying on David De Gea to have the game of the season, or his life. The manager needs to be braver, and as much as it pains me to say it, take a leaf out of Liverpool’s book

4. The key to victory on Saturday is …

SC: A convincing regrouping exercise after Anfield. Playing the best possible side is now paramount, after many thought resting key players for the Liverpool second leg might be a sensible option. As things have panned out, City really need to stamp their authority, play the usual style with the usual players in the usual set-up and let the opposition do the worrying. It has worked beautifully all season and we have all seen what happens when the manager attempts something too clever and veers away from the tried and tested in an important match. This most definitely is not a match for more daft experiments.

SP: United’s best players need to play out of their skin. The job being asked of Paul Pogba and Nemanja Matic will be huge. Pogba is going to have to be disciplined and help Matic against the likes of David Silva and Kevin De Bruyne, presuming they play, while also being at his best finding his teammates ahead of him. Romelu Lukaku hasn’t been totally anonymous in big games, with a goal and a few assists against the top teams, but he’s been wasteful with the few chances that United have created against our biggest rivals. He must take them on Saturday.

SC: 3-1 City. After Liverpool, I expect a full-strength side that is well wound up, with a crowd hungry to see it sealed against United. It would also free the minds completely for a final onslaught in the Liverpool second leg.

SP: 2-1 United. Why not? City will presumably rest a few players and have their heads down, while the United players watching Wednesday’s game will see how beatable they are. I’d gladly take a draw though.