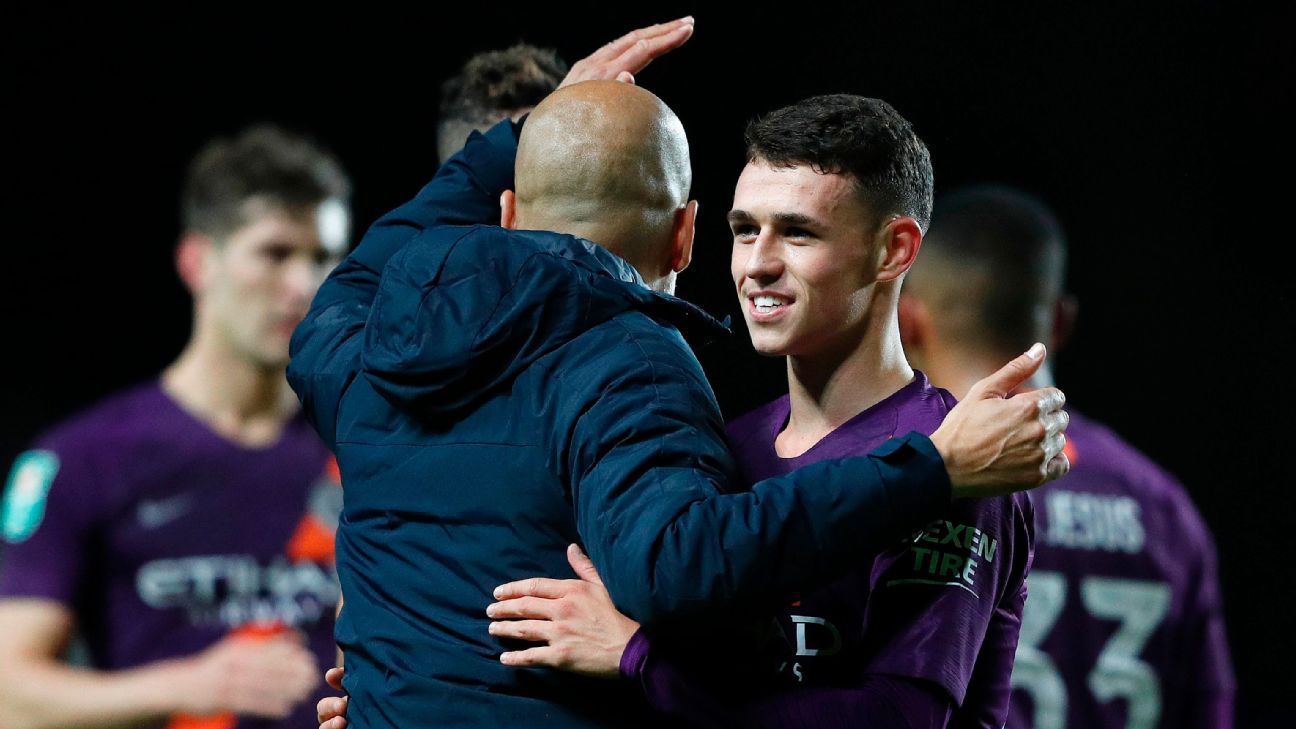 
OXFORD, England — Pep Guardiola said Phil Foden will be an “amazing player” for Manchester City for the next 10 years after his brilliant display in the 3-0 victory over Oxford United.

The 18-year-old, making just his fifth start, scored his first goal for the club as the defending champions secured a place in the fourth round of the Carabao Cup with a comfortable win.

He also had a big hand in the other two goals — spraying a 40-yard pass which led to the first-half opener for Gabriel Jesus before laying on the assist for Riyad Mahrez’s second. Foden then wrapped up the victory with a low drive in the 90th minute and sprinted over to the away end to celebrate with the fans.

“The way he celebrated he showed he is a City fan. He likes to be here. He’a an exceptional young player and for the next decade Manchester City will have an amazing player,” Guardiola told reporters.

“He still needs to grow but I think being more than one year together with us, the rhythm we play, the pace we play, he gets it. That’s why he’s ready. Home and away no problem.”

Despite his age and inexperience, there have been calls for England manager Gareth Southgate to call up Foden to the senior England squad.

And he won another fan in Oxford manager Karl Robinson, who described him as a “genius” in his postmatch news conference and likened Foden to former Barcelona midfielder Andres Iniesta.

Guardiola fell short of offering the same comparisons but insisted he could have a big future at the club.

“My dream is for him to stay 10 years and if Phil stays for 10 years, he can be in the next decade he can play regularly and after I don’t know what is going to happen with him,” the City boss added.

“I am not going to say he is going to become Andres Iniesta because it puts pressure on him, Iniesta is by far one of the best players I ever saw in my life so we cannot put that pressure on Phil.

“But he has the quality to stay here for 10 years because I think he wants to stay, I think the club wants him to. But step by step, he needs to play regularly, but I think he has all the skills to play with us.”

Guardiola also handed debuts to 19-year-old goalkeeper Aro Muric and 17-year-old Adrian Bernabe, a highly-rated midfielder who joined from Barcelona in the summer.

Spanish winger Brahim Diaz, 19, also made just his second start for City and Guardiola is hoping his young players can earn their place in the first team.

“It is not easy to play in the big clubs like Man City,” he said. “In preseason we saw them. Today Adrian played some minutes too.

“It depends on them but if they have quality and in some moments if they can show us, they can play.”