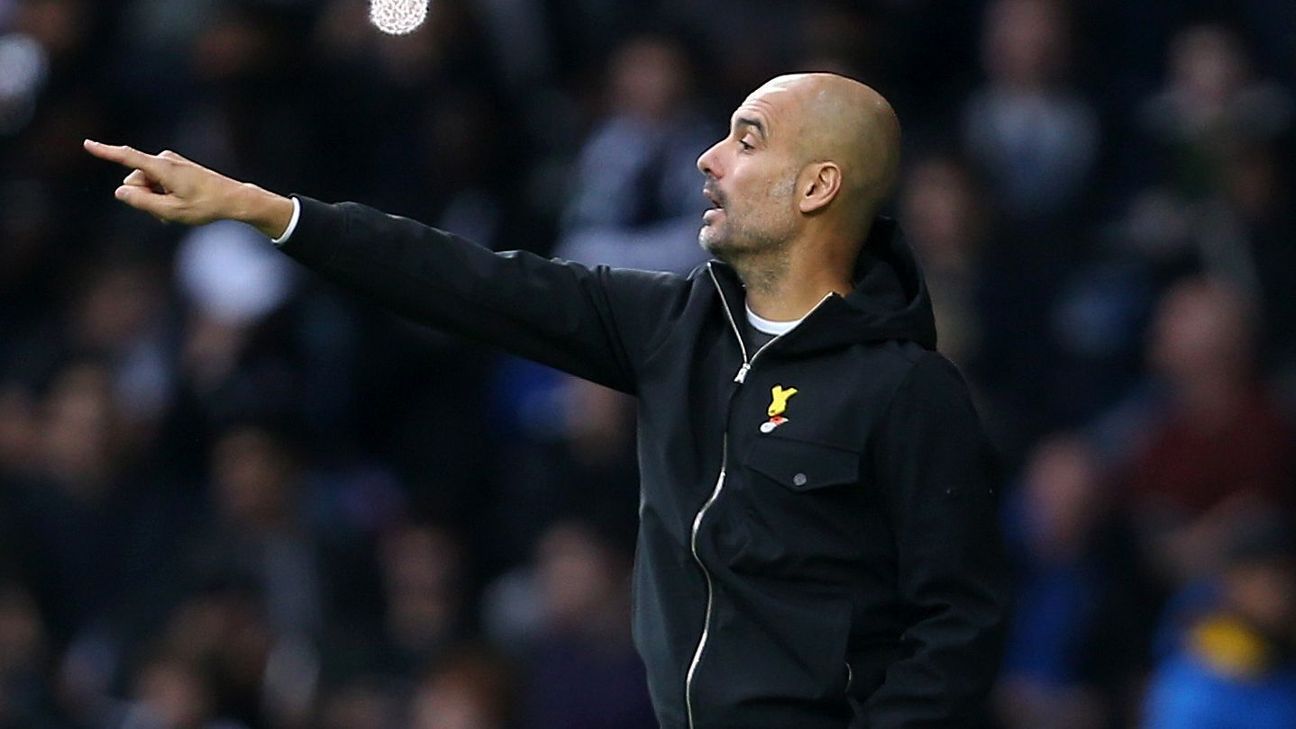 
People hooked on the horns of a dilemma can often be forgiven for wearing expressions of bewilderment. This is the kind of face Pep Guardiola has pulled successfully more than once since his arrival in England a year and a half ago.

His time managing Manchester City has been studded with moments that suggest a lack of comprehension, whether provoked by an occasional media penchant for sturdy English tackling over his cultured pass-and-go or by fellow managers, who refuse to shed the heavy cloak of defensive cover in direct combat with his effervescent team.

The frown and shrug have never been far away during public appearances, as questions about Raheem Sterling’s imminent departure for Real Madrid and Lionel Messi’s arrival in Manchester continue to be cast in Guardiola’s direction. The tittle-tattle of the daily press corps, keen to fill their pages with reactions to non-stories of this kind, must seem like so much wasted time and the City manager does not spare the facial expressions in delivering his verdict.

This week he may well be looking pensive for another reason. In the cold light of day, Guardiola is paid a healthy wage to keep his mind clear of irrelevant reflections, but for City’s followers the away game against Shakhtar Donetsk throws up a doubt:

To preserve City’s winning streak, or at least remain unbeaten, or to wrap up the side’s star performers in cotton wool in anticipation of the war of attrition that surely awaits them at Old Trafford this weekend.

The stunning winning run must end at some point but, having reached 20 last weekend, it is logical that all concerned wish it to continue. However, City are beginning to be squeezed a little and four tight, edgy games on the trot against Feyenoord, Huddersfield, Southampton and West Ham have taken their toll.

Though the wins just keep coming, the manner of their delivery has changed somewhat. Gone are the goal avalanches of September’s waltzes against stunned Stoke and caught-in-the-headlights Liverpool.

Now the margin is threadbare (four one-goal victories on the bounce), the going tough (late winners in all four games) and the need for character and guts acute (coming from a goal behind in two of the four).

Without the marauding Benjamin Mendy down the left and the cultured John Stones in the middle, the defence is also under pressure, with teams suddenly wondering if there is a chink of light to be seen with the delivery of high balls into the box from set pieces.

Whether the slightly troubled continuation of a 20-win streak can be said to reveal a detectable dip in form is arguable, but a certain looseness, a kind of slackening off, is evident.

It might be that this coincides with a similar, slight drift in form from Kevin De Bruyne, a month ago talked of as a shoo-in for player of the year awards, now finding it tricky to issue those laser passes through a constant wall of two rows of four opposing players. Momentary inaccuracies have also crept into David Silva’s game in the face of the concerted blocking tactics employed against him.

It might also be that this coincides with Stones’ absence through injury. Although Nicolas Otamendi has done a sterling job of carrying the ball out of defence and has weighed in with crucial goals, too, his central defensive partner’s cool distribution and unflappable style had become something of a hallmark of Guardiola’s new-look City.

Up at the pointy end, Sergio Aguero’s scoring form, which carried him past Eric Brook’s club record, has slowed.

Among the maelstrom of contributory factors, City now face conflicting urges: remain unbeaten for yet another — admittedly meaningless — game and keep the run going, or wrap up those who will be thrown into the fray at Old Trafford next weekend in cotton wool and risk defeat in the Ukraine? Something, as the old saying goes, has to give at some point.

In the meantime, Napoli — hoping for a big effort from City to aid their own chances — must wait and see. A City win would enable them to set another record as the first English side to win all six group games.

The players and manager must put the derby out of their minds and focus on the task at hand. Once Shakhtar have been dealt with, Guardiola’s expression may lighten a little, as he fixes his view on what is likely to be his side’s biggest test of the season so far.