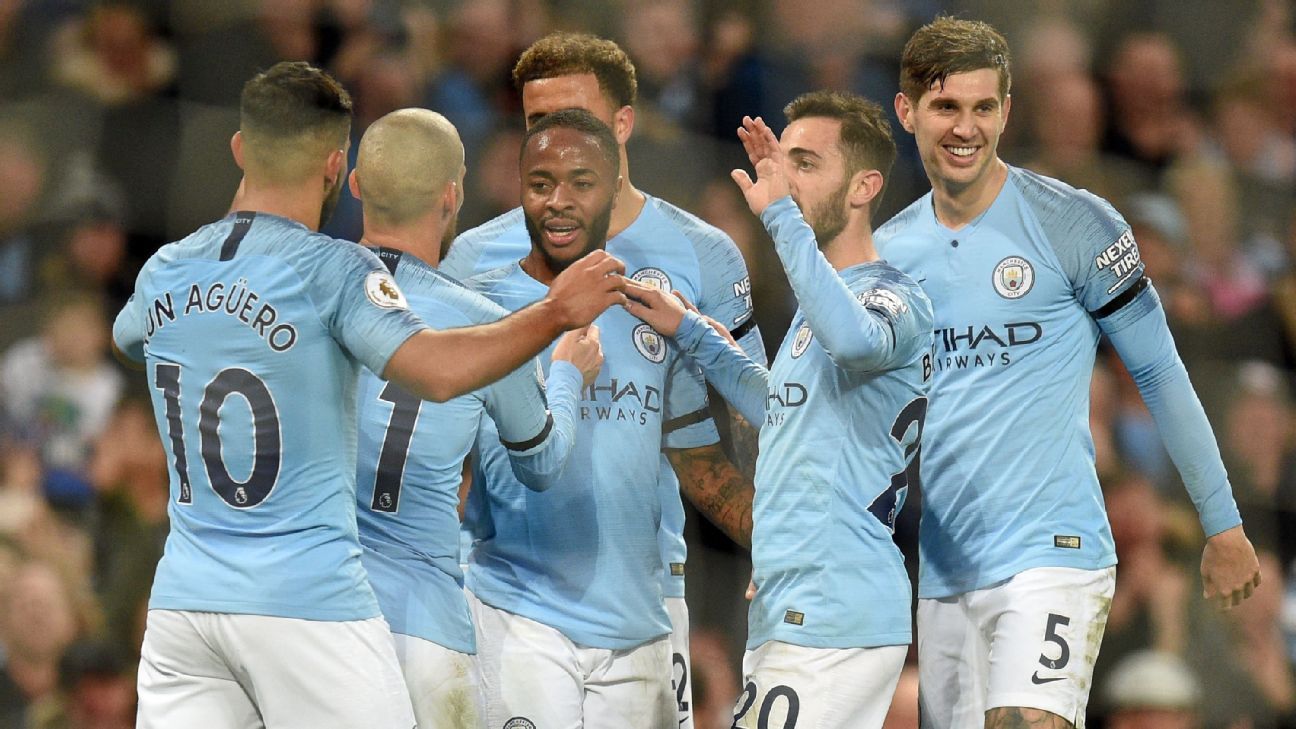 
There was something ominous about Manchester City’s 2-1 victory against Watford at Vicarage Road on Tuesday.

Without Sergio Aguero, Kevin De Bruyne, Aymeric Laporte, Raheem Sterling and Benjamin Mendy, Pep Guardiola’s team eased to a win which was much more emphatic than the final scoreline would suggest.

Those five absentees were barely missed, if at all, which is staggering when you consider that their combined value in the transfer market right now would probably be close to £600 million.

You wouldn’t get much change from £100m for Aguero or Laporte, while De Bruyne and Sterling would command fees in the region of Neymar’s world record £198m if they were to suddenly find themselves available for transfer.

But then the players who played in place of those absent stars were also high-value performers.

Leroy Sane and Riyad Mahrez both scored, Bernardo Silva once again showed why De Bruyne has not been missed, while Vincent Kompany gave an outstanding performance at centre-half with Laporte putting his feet up on the substitutes’ bench until the 89th minute.

As for Fabian Delph, it has now become second nature for the England midfielder to step in for Mendy and he never lets City down.

Ilkay Gundogan and Nicolas Otamendi made late appearances from the bench as Guardiola ensured that Watford’s late fightback did not result in a surprise equaliser, while Phil Foden and Danilo kicked their heels on the bench.

It has been like this all season for City — great players on the pitch and equally good ones on the bench — and it is why they travel to Chelsea on Saturday knowing that they are quickly and convincingly building the momentum to emulate Arsenal’s 2004 “Invincibles” by going through a Premier League season unbeaten.

Last season, only Manchester United and Liverpool were able to beat Guardiola’s men in the league and both those victories were hard-earned and by a one-goal margin.

City simply do not stumble against teams from the lower reaches of the Premier League.

The last time they picked up zero points from a game against a team outside the so-called “Big Six” was all the way back in January 2017, when they lost to Everton 4-0. So if they are to lose in the league this season, who is actually capable of beating them?

Guardiola’s men have already travelled to Arsenal, Liverpool and Tottenham, collecting seven points from a possible nine in those fixtures, so they will be confident of repeating, or bettering, that tally in the return home fixtures.

Stamford Bridge is the next obstacle and Chelsea, with Eden Hazard flourishing again under Maurizio Sarri, are a team capable of beating anybody on their day.

But the impressive start to life under Sarri has fizzled out in recent weeks, with Chelsea losing two and drawing one of their last four league games.

They remain a tough opponent for City, and the tight and confined spaces of Stamford Bridge may play in the home side’s favour. That said, Chelsea’s recent form does not suggest that they will give the chasing pack hope by claiming all three points on Saturday.

So if City emerge unscathed from Stamford Bridge, where are they likely to lose between now and the end of the season?

They still have to face Man United at Old Trafford, and last season’s 3-2 defeat at home to Jose Mourinho’s team underlines the unpredictable nature of a derby. This United side, though, cannot even beat Crystal Palace at home, so what hope do they have against City who, it must be pointed out, have won on their last two league visits to their local rivals?

Liverpool are the team best-equipped to get under City’s skin and inflict the defeat that would deny them the title of Invincibles Part 2, and Jurgen Klopp’s team travel to the Etihad for a huge clash on Jan. 3.

For Liverpool to have any realistic hope of overhauling City to win the title, they really must win that game because they simply cannot rely on the rest of the Premier League to rein Guardiola’s team in.

That was shown to be the case at Watford.

Javi Gracia’s players gave their all and boldly took the game to City, but even without five of their most important players, the champions bagged yet another three points.

They have become a Premier League juggernaut and even with 23 games to play, it is difficult to envisage anybody stopping them this season.