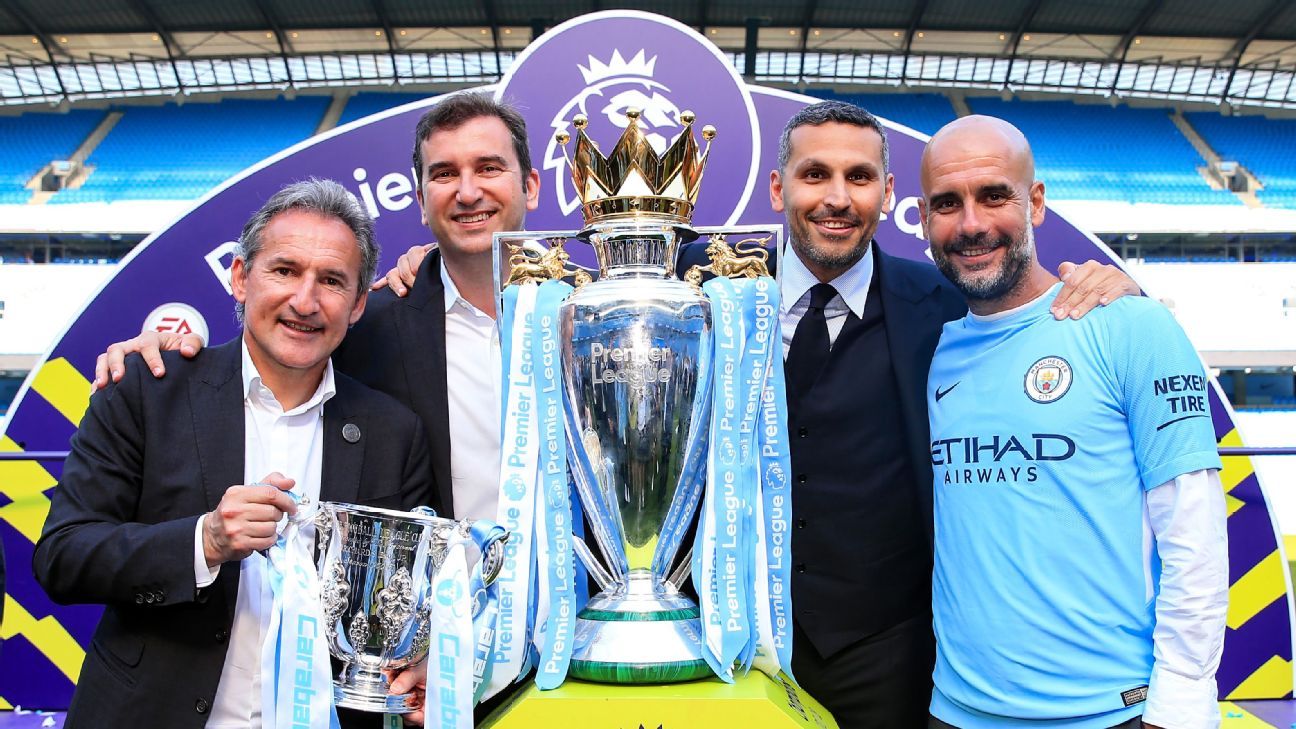 
If — even for a short while — you can suspend your allegiances, silence your biases and stow what you know and reject what you suspect, you can watch Manchester City and admire them as the highest expression of football, the perfect synthesis of style and functionality.

Most of those reading this will have allegiances, and they will be to teams other than City.

You may dislike City because you disagree with how their owners choose to run the country they rule (or possibly the fact that they rule the country at all) or you may be one of those people who thinks these are legitimate reasons to dislike Raheem Sterling. You may admire Vincent Kompany because he speaks intelligently and articulately on a range of non-footballing subjects or adore Benjamin Mendy because his social media accounts are hilarious.

And then there are facts and reasonable suspicions. The fact is that Manchester City have spent an inordinate amount of money to get where they are. To some, it may be a turn-off, but it’s worth remembering that in the free-market world of football, so too have most of their competitors. Not just now, but — in relative terms — for most of the game’s history.

It’s also a fact that Manchester City were sanctioned in 2014 for breaching UEFA’s financial fair play (FFP) requirements. This, too, can be swallowed rather easily. FFP itself was seen by some — not just City fans — as a way of protecting the established clubs by preventing others from overspending. Many other clubs, from Paris Saint-Germain and Roma to Porto, Inter and Monaco, also breached FFP. Just as they did, City signed a “settlement agreement” — in effect, a plea bargain — and moved on.

Which leaves the reasonable suspicions. Over the past week, the football world was rocked by a tide of detailed allegations about those breaches and the way City dealt with them, a part of Der Spiegel’s “Football Leaks” series. Some of it was already known to the general public, some of it was strongly suspected, some of it was entirely new. What’s new? The documents allege the owners made cash payments to friendly corporations who then funneled that money directly to City in the form of sponsorships. They also set up a dummy corporation traceable back to the owners then bought player image rights from the club.

The practical knock-on is yet to be determined. Whether City face further punishment will depend on how much of the above activities were known to UEFA’s investigators at the time of the 2014 plea bargain. If they were aware of them, it’s hard to see how City can be sanctioned further, considering reopening the case would amount to double jeopardy. It will also depend on UEFA’s political will and that of their stakeholders (led by Europe’s superclubs): just as there was no desire to throw the book at them in 2014, there may not be today.

And that’s not going away any time soon.

For a club that employs an army of PR folks and communications specialists who are so effective at highlighting City’s positives — from their social role in regenerating parts of Manchester to their work in the community — the degree to which they mishandled FFP is frankly staggering.

Der Spiegel alleges that not only did City haggle over the true value of their inflated deals with friendly (read: Emirati-related) sponsors — which would have been understandable — they went far beyond that. According to Football Leaks, they cooked the books and made hidden payments to appear compliant. If the allegations are correct — and City thus far have not disputed the evidence — it amounts to cheating.

What must frustrate City fans and many of those working at the club is that it did not need to be this way.

There were two other paths they could have taken. The more noble one? Going to court. Whenever you bring up FFP, many City fans say it’s illegal because it’s tantamount to restraint of trade. Der Spiegel’s documents appear to show that the club were willing to challenge the legality of FFP. I have no idea if they had any prayer in a court of law, but there is no question UEFA considered the risk of a lawsuit in agreeing a plea bargain in 2014.

What would a lawsuit have meant? In practical terms, no participation in the Champions League, and assuming it would have taken a couple of years to get to a decision, no UCL revenue for three seasons. In City’s case, that would have meant giving up the roughly £180 million they earned in European prize money in those years. That’s a ton of money, although maybe not so much to Abu Dhabi’s royals.

But, crucially, it would have also given them the moral high ground. They would have been saying: “UEFA’s FFP means they are operating an illegal cartel, we refuse to be part of it and we are putting our money where our mouth is.” Instead, the perceived message became: “We believe FFP is illegal, but we’ll go along with it, cooking the books if necessary because ultimately it benefits us in the long run.”

Bear in mind that if City had won in court, they would have earned plenty in compensation for those years of lost UCL earnings. If they lost, they would still have “fought the good fight” in the eyes of their supporters (and those of others who believe FFP is illegal), still won various Premier League titles and still built a global brand. What’s more, once the court case was settled, even if they lost, they could still have returned to the Champions League.

Or they could have taken the PSG route. Which, as the documents reveal, was simply to repeat incessantly that UEFA were wrong, that the mega-sponsorship deal with a single Qatari entity (the Qatari Tourism Authority) was a legitimate contract at fair market value. When UEFA, as part of the FFP process, hired independent marketing experts to determine that, no, it was actually overvalued by a factor of 80, they negotiated their punishment down as best they could, took it on the chin and settled.

Instead, City — or, more accurately, the few people at the top of the club advising chairman Khaldoon Al-Mubarak at the time — chose a different path. Knowing what we allegedly know now, it was a big mistake. If you’re a City fan or if you’re owner Sheikh Mansour, that’s where you should be directing your anger. You ought to hope there will be consequences for those individuals.

As for the rest of us — absent our biases, allegiances and prejudices — hopefully we can still appreciate the beauty that exists in City. What they produce on the pitch is special, and it’s not merely a function of accumulated talent, but the intellect, creativity and foresight of so many people behind the scenes at the club.

It boggles the mind that a club run so well in some spheres could — if the allegations are true — have been run in a way that was so craven, cynical, sneaky and downright stupid in others.