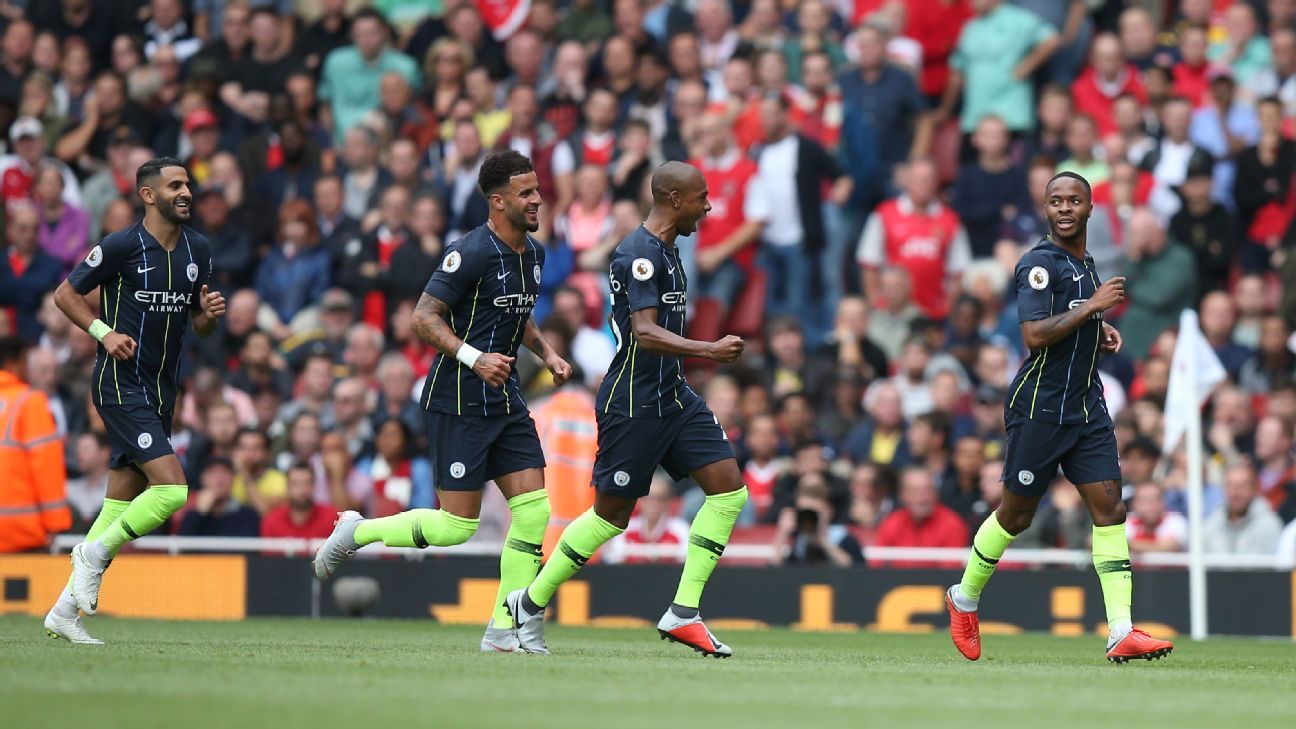 Manchester City picked up where they left off last season with a dominant performance to win 2-0 at Arsenal.

It is worth noting that the defending Premier League champions unpicked the opposition on Unai Emery’s debut without Gabriel Jesus, Fabian Delph, Leroy Sane, David Silva, Nicolas Otamendi and Kevin De Bruyne in the starting line-up. In other words, six of their 11 most frequently-used players from last season were missing, when they set a new Premier League points total with 100.

The scary bit for rivals is the seamless way in which Pep Guardiola can change personnel and not miss a beat. Such depth of talent, traditionally, is a double-edged sword: You gain in terms of alternatives and competition keeps players motivated. You lose regarding chemistry and the ability to keep guys who want to play all the time happy.

Guardiola — yes, it’s early, but there’s also evidence from last season — appears to have mastered the chemistry part and, in terms of keeping folks happy, thus far at least he seems to have a handle on his squad in terms of man-management.

It will be particularly interesting to see how Bernardo Silva develops. He played most of the past three years — for Portugal, City and Monaco — wide but his natural position is inside. He is not lightning quick and can suffer physically on the wing when not in possession (not usually a problem with City). In the middle, he can be the heir apparent to his namesake David Silva; you would expect Guardiola to rotate De Bruyne and the two Silvas in that position this season.

As for Arsenal, the good news is they won’t be playing City every week, but new manager Unai Emery has a ton on his plate in pretty much every area of the pitch.

Up front, they look frightfully narrow. Henrikh Mkhitaryan and Mesut Ozil coming inside is fine, but then you need full-backs to attack effectively, though playing 55 minutes with Stephan Lichsteiner on the wrong flank doesn’t help. And in midfield, Matteo Guendouzi has a lot to offer but, maybe, this wasn’t the right game for a kid who only turned 19 in April.

Goalkeeper controversy at the Bernabeu?

The arrival of Thibaut Courtois means that Real Madrid have five goalkeepers, with Keylor Navas, Kiko Casilla, Luca Zidane and Andriy Lunin also on the books.

You would imagine Casilla will go on loan if he cannot be sold, as will one of the two youngsters, just to get them playing time.

However, based on what he said last week — “The advantage is that we have some great competition and that’s ideal in every position” — new manager Julen Lopetegui appears to want Navas and Courtois competing for the starting job.

Time will tell whether he means it. It is hard to see Madrid committing substantial funds to Courtois if he is not going to start. Equally, why he would have accepted the move from Chelsea if there was a risk of being benched, when the alternative would have been moving as a free agent next summer.

As such, the European champions might be better off shifting Navas now if they can find a home for him at the right price.

Pogba and Mourinho must work together

Manchester United began their league campaign with a victory over Leicester that, in some ways, was overshadowed by Paul Pogba’s post-game comments.

Pogba is one of the more intelligent footballers I have ever met and has been in the limelight since he was 17. He knows exactly what he is doing when he says things like: “There are things that I cannot say, otherwise I will be fined.”

Moreover, he knows comments like that will invite speculation. Many will jump to the conclusion that he is somehow not happy with his manager Jose Mourinho. I am not sure it is that simple or, if it is the case, that it necessarily needs to be damaging to United.

Maybe I’m seeing the glass as half-full, but perhaps it ought to be read as an invitation for everyone involved to pull together. And if there’s one thing of which we can be sure, it’s that it’s in the interest of both men to make it work this year.

Mourinho’s summer sniping over transfers and the past two campaigns have hurt his political capital. Pogba, meanwhile, won the World Cup but needs to kick on. Finding common ground really should not be that difficult, though whether it is enough to make up for United’s other flaws remains to be seen.

Barca begin with a trophy

Barcelona beat Sevilla to win Spain’s Super Cup in Morocco as VAR made its debut in the Spanish game and immediately had an impact, when Pablo Sarabia’s opening goal of the game was correctly allowed to stand after initially being deemed offside.

Barcelona struggled to get into the game early on, before breaking through via Gerard Pique late in the first half and Ousmane Dembele towards the end. In the closing minutes, Sevilla’s Wissam Ben Yedder missed a penalty when Marc-Andre ter Stegen saved his spot kick.

Barca showed a bit of ring rust, particularly in midfield and business only picked up after Ivan Rakitic and Philippe Coutinho replaced Rafinha and Arthur. As for Sevilla, new boss Pablo Machin’s set-up looked tidy and sharp; you wonder what they can do with a bit more work under their belt.

Liverpool’s 4-0 thumping of West Ham might have had a lot to do with their opponents’ turgid performance, but it’s still remarkable how quickly Jurgen Klopp’s crew came out of the gates.

Guys like Virgil Van Dijk and Andrew Robertson, who had the summer off, looked sharp and match-fit. Naby Keita played like the Keita of two years ago, not the one from last season, and that means he’s a one-man wrecking crew in the middle of the park, both on and off the ball.

This is a better-rounded Liverpool team than last season, one that — if everyone stays healthy — will not have to put square pegs in round holes.

Daniel Sturridge getting on the scoresheet was another plus. While not impossible, it is unlikely that Mohamed Salah will rack up 44 goals again and that means another, more traditional, scorer off the bench — be it Sturridge or Dominic Solanke — might make all the difference in certain games.

I was asked on ESPN FC TV what was more surprising: Cristiano Ronaldo moving to Juventus or Leonardo Bonucci making his return to the Italian champions. While there appeared to be little chance for either six months ago, I opted for the latter, simply because of the number of factors that had to fall into place for it to happen.

Namely, Li Yonghong relinquishing control of Milan (OK, that one was not so far-fetched), as well as Bonucci eating humble pie and many at Juve, including the club’s Ultras, agreeing to let bygones be bygones.

It’s a fascinating and improbable reconciliation that is likely to be the “other” talking point in Turin all season.

Sarri begins to shape ‘his’ Chelsea

Maurizio Sarri insists we will not see the Chelsea he has in mind for another couple of months, which is more than understandable. His football is very different from Antonio Conte’s and it takes players a long time to adapt. But against many opponents — as was the case Saturday in the 3-0 at Huddersfield — there’s a talent gap that will see them through.

Using N’Golo Kante as an up-and-down spoiler, rather than the defensive stopper he was under Conte, was a nice twist that, with hindsight, makes sense: Sarri’s teams tend to see a lot of the ball and, if that is the case, the back end of a midfield three should be a playmaker like Jorginho.

Many are taking for granted that Mateo Kovacic will be the third prong in the middle-of-the-park trio but I am not sure. Sarri has plenty of options — Ross Barkley, Cesc Fabregas and Ruben Loftus-Cheek are others — who bring different attributes to the table. What does seem clear, though, is that Kante will play as many minutes as possible.

PSG youngsters set to get their chance

Paris Saint-Germain rolled to an easy 3-0 win over Caen in their Ligue 1 opener. Thomas Tuchel’s side never got out of second gear, but then they did not really need to against opponents that looked definitively sub-par (particularly the keeper, Brice Samba, who had a nightmare).

Neymar opened his account, Adrien Rabiot added a second and 18-year-old substitute Timothy Weah also got on the scoresheet. The USMNT striker and his dad, the legendary George Weah, become the second father-son duo to score for PSG after Youri Djorkaeff and his father, Jean.

The other interesting point was PSG’s line-up, which saw Tuchel field three teenagers in his starting XI — full-backs Colin Dagba and Stanley N’Soki and midfielder Antoine Bernede — while Weah and Moussa Diaby came on as substitutes.

True, PSG have injuries and guys who aren’t fully fit post-World Cup, but the club’s official website only lists 14 outfield players in the senior squad (Sunday signing Thilo Kehrer boosts the total by one). It has to be one of the smallest of any top team in recent times and that means plenty of minutes for the kids.

You get the impression this is by design, given the looming Financial Fair Play audit for the period that covers last summer and the arrival of Neymar and Kylian Mbappe. Even after the Kehrer signing, PSG have a positive net spend of some $20 million this summer and you’d imagine they can raise another $70m or more by shifting Jese and Goncalo Guedes before the window closes.

New Bayern Munich boss Nico Kovac has his first trophy, having won the German SuperCup in the most emphatic way, with a 5-0 drubbing of his former club Eintracht Frankfurt. Robert Lewandowski notched a hat trick and it was pretty straightforward for the Bavarians to unpick Adi Hutter’s side, which looked unbalanced and underprepared.

We got to see Leon Goretzka, Bayern’s one significant newcomer, in the second half and it will be interesting to see how Kovac doles out playing time this season, particularly in the middle of the park, where there is plenty of depth.