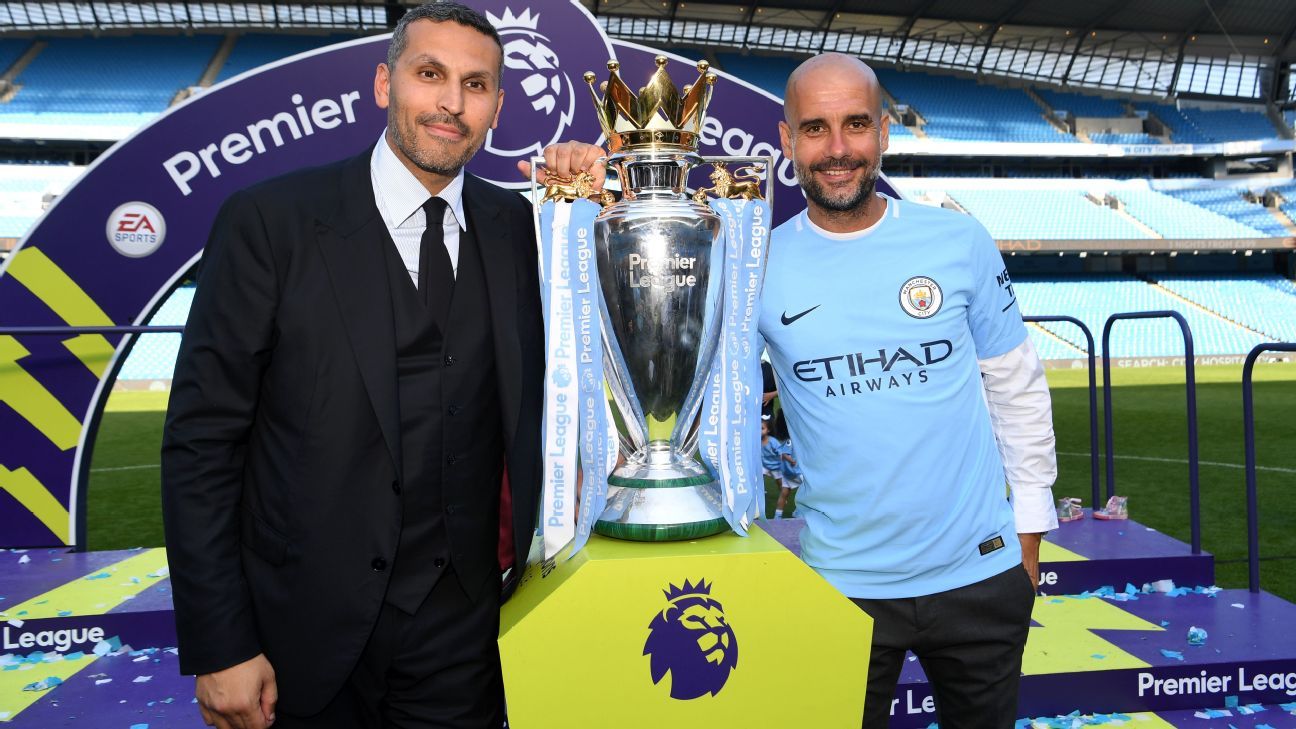 
Khaldoon Al Mubarak, the Manchester City chairman, has told ESPN FC the club “should win” the Champions League within the next 10 years after declaring the first decade of Sheikh Mansour’s ownership as an “extraordinary journey.”

Sept. 1 marks the 10th anniversary of Sheikh Mansour bin Zayed al Nahyan’s £210 million takeover of the club and Al Mubarak, speaking exclusively to ESPN FC, insists that the progress and success of the past 10 years is only the starting point of what can lie ahead for City.

But while he believes it will be virtually impossible for City to replicate the domestic dominance enjoyed by neighbours Manchester United under the management of Sir Alex Ferguson, who guided United to 13 Premier League titles in 20 years, Al Mubarak said that there is now an expectation within the Etihad Stadium of Champions League success.

“The short answer is, yes we should win it [Champions League] in the next 10 years, and obviously sooner rather than later,” Al Mubarak told ESPN FC. “But it’s hard.

“Every game [in the Premier League] is absolutely difficult, home or away. That’s a fact. It’s real. You can go to any of last season’s bottom three and they are very difficult games. That’s the beauty of this league, but also puts a huge toll — physically and mentally — on those teams competing for the Champions League.”

City have won three Premier League titles under Abu Dhabi ownership, the most recent coming under Pep Guardiola last season, and there is a belief within the English game that his team could dominate for years to come.

While Al Mubarak admits he would embrace such dominance, he believes the domestic obstacles which make winning the Champions League so difficult for Premier League clubs are also a major reason why City will be unable to match the long-term stranglehold asserted on the English game by United under Ferguson.

“The dominance that United had, of 13 titles in 20 years, is almost impossible to do in the modern game,” he said. “It is too competitive, too difficult, and that’s the beauty of the Premier League.

“Italy is different, with one team dominating, and it is unfortunate for that league. Germany is the same. You have two or three competitors in each league, but a very dominant No. 1.

“The Spanish league has three teams competing, but in reality two who can win it year in and year out, but the Premier League — just look at the past three champions.

“But the beauty of what we have today, with Guardiola, is what I believe is the beginning of a period that this club is going to go through, of sustained success in quite a beautiful way.

“Last year was wonderful, and we are very excited about this season, and the years ahead with Pep, this organisation and the group of players we have put together.”

Having acquired a club with a history of failure back in 2008, City are now one of the most successful English teams of the past decade and a regular competitor in the Champions League.

A huge amount of investment on and off the pitch, which has surpassed £1 billion, has helped fuel City’s rise, with the club forced to overcome UEFA’s financial fair play regulations and the resistance of the established elite in order to reach their position.

And despite the silverware won by managers Roberto Mancini, Manuel Pellegrini and Guardiola, Al Mubarak admits that the toughest aspect of the past 10 years has been that of breaking into the establishment.

“The biggest challenge, I think, was getting a seat at the table,” he said. “That was the hardest thing.

“It quickly dawned on me that football in Europe had a main table, with a set of clubs, and that was the status quo. Breaking into that status quo was incredibly difficult, very challenging.

“The reality is that we didn’t start at a base like Barcelona, Real Madrid, Juventus, Bayern Munich in Europe or Manchester United, Arsenal, Chelsea in the Premier League — these clubs were successful and they had infrastructure.

“We weren’t there and we had a major disadvantage against all of them, so when we were attracting talent, we had to go to the intangibles and the intangibles had to be financially, mainly, and selling a dream or a vision.

“Now it’s different. It’s completely different and we are now part of the establishment.

“But there was immense resistance, even to this day there remains some of that resistance, so that was the hardest challenge.”

That resistance was evident recently, with Javier Tebas, the La Liga president, claiming earlier this month that Paris Saint-Germain’s transfer strategy was a “combination of tricks, just like Manchester City, that generate circumstances which destabilise the market.”

Al Mubarak insists, however, that City are victims of a “lack of understanding.”

“There is hostility from people who have formulated views,” he said. “I think in his [Tebas] case particularly, he unfortunately doesn’t want to take a moment to do the research and formulate an educated view.

“He has taken a view based on a sense of what works for his base, so I take it in my stride. Everybody knows what he’s about, so I don’t need to say too much about him.

“But I think going back in general terms, there is a lack of complete understanding.

“People who care to take a look and research Manchester City, particularly what we have done, this has been a carefully-crafted strategy that has been executed successfully.

“No doubt over the years, as with any strategy, there will be ups and downs and mistakes made, but overall, we have a strategy that we started on 10 years ago and here we are in 2018 — our record speaks for itself across the board in terms of success, economically and in the community.

“All you have to do is walk in Manchester and see what this club has done for the community here and what it continues to do, and how it has been embraced by our fans.

Al Mubarak adds: “By the time we won our second Premier League [in 2014], that’s when we really crossed a very important threshold.

“From thereon, we have started to become a club that didn’t have to pay the premiums that we previously needed to do.

“The first period, up to 2013 in that growth period that we had embarked upon, we had to pay premiums and go out of our way to attract the talent we wanted to Manchester City.

“But then two things happened — we started winning, and winning is a wonderful formula to attract, and secondly, the City Football Academy [training ground] was done.

“Ten years ago, what are you selling? You are a selling a dream or a vision, but there is nothing there.

“Now you have it, it sells itself and I think we are far more in control of our destiny than we ever were.”

So 10 years after arriving at City, how does Al Mubarak reflect on the first decade of Abu Dhabi ownership?

“Two words — extraordinary journey,” he said. “I’ve really enjoyed every part of this 10 years and I think where we are today, compared to where I thought we would be 10 years ago, I think it has far exceeded all my expectations.”