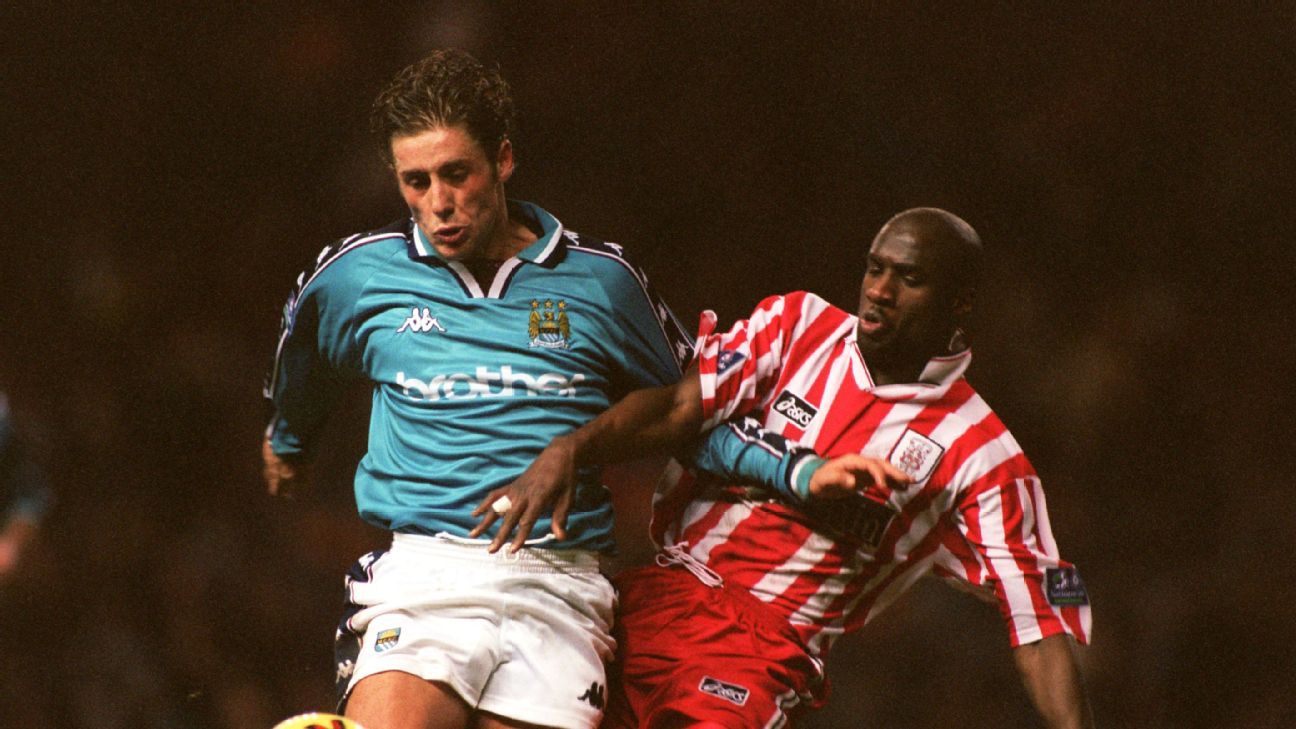 
When Manchester City and Stoke played out an exhilarating game in Manchester on Dec. 28 1998, both sets of supporters left the old ground breathless and dazed. A thundering match — played out in front of the division’s largest crowd of the season to that point — had ended in a 2-1 win for the home side. The three points allowed City to gain ground on those at the top of the table and stalled Stoke’s progress above them in 3rd place. The game took place in the third tier of English football.

By the end of a gruelling season of 46 games, City had leapfrogged Stoke into 3rd place, still not enough for automatic promotion. Their opponents had fallen away to 8th, necessitating what would turn out to be a further 3-year wait for promotion.

That City survived a gruesome play-off ordeal against Wigan Athletic over two legs in the semifinal, then an even more harrowing experience at Wembley against Gillingham, has long gone into the club’s folklore. Any individual, who witnessed the play-off final that year will have various moments from the 120 minutes of torture etched on their subconscious until their dying days.

Stoke would be thwarted in the play-offs a year later by the same Gillingham side that, under future Stoke manager Tony Pulis, had given City so many problems in 1999, and again at the same stage by Walsall in 2000, before finally arriving — via the dreaded play-offs yet again — in the second tier.

By the time they got there, City had been promoted to the Premier League under Joe Royle, been relegated again straight away and gone up a second time under Kevin Keegan. To look at two stable Premier League performers today is to look at two very different beasts to those yo-yoing through the leagues 17 years ago.

Although investment in Stoke is dwarfed by the money that flooded into City’s near-empty coffers in 2008, there has — under chairman Peter Coates — also been significant spending.  Stoke are celebrating 10 years in the Premier League, their best effort since 1976, while City have hoisted themselves into the six-team elite at the top of the pile, who can realistically dream of hoovering up the domestic game’s annual prizes.

The resurrection of these two great old clubs, founded in 1863 and 1880 respectively, was rubber stamped when they met in the 2011 FA Cup final, City coming out winners with a single goal from Yaya Toure bringing in the first silverware in 35 years. Since then, City have won the Premier League twice, the League Cup twice and returned for another FA Cup final, losing out to a Wigan Athletic side, who also participated in that third division season of 1998-99. That future Premier League sides Fulham, Bournemouth, Blackpool, Reading and Burnley were also to be found in the third tier that season speaks volumes for those who aim high in life and refuse to give up.

Sadly, as Wigan and Fulham have found out, the dream can quickly turn to dust too. City’s own topsy-turvy past, littered as it is with relegations and promotions, also stands as a sobering warning to those, who eschew stability in their hunger for higher ground.

That this weekend’s match will showcase world stars of high calibre on both sides of the halfway line suggests Stoke are also stabilising as top-flight pillars. That Mark Hughes was City manager, when the club’s prospects of ever being relegated again suddenly took a lurch towards the unlikely, adds further fascination to the fixture.

Perhaps incapable of steering the club through the initial stages of huge investment, Hughes was discarded after a year and a half for the international nous of Roberto Mancini and ended up at Stoke via Fulham and later Queens Park Rangers. He was the manager of QPR when they almost dented City’s historic first title win since 1967-68 in the never-to-be-forgotten cliff-hanger on the final day of the 2011-12 season.

Hughes, watching from the touchline, as his lowly Rangers side came within seconds of robbing City of the Premier League title they had waited 44 years to capture, may not fully appreciate the rise of his ex-club to the level of Champions League regulars and home to international stars of the highest calibre. It would be understandable if he harbours a little ill-will for his sudden and public departure from the Etihad in the winter of 2009.

Despite this, his name will be mentioned in dispatches when historians look back at the tumultuous journey both these sides have undertaken in modern times. While they hardly meet on level terms this weekend, they can point to a shared recent history that is living proof never to presume the game is up. As City look to maintain their grip on the top of the table and Stoke search for their first away win of the season, there will be plenty who still remember the hard times of the winter of 1998.