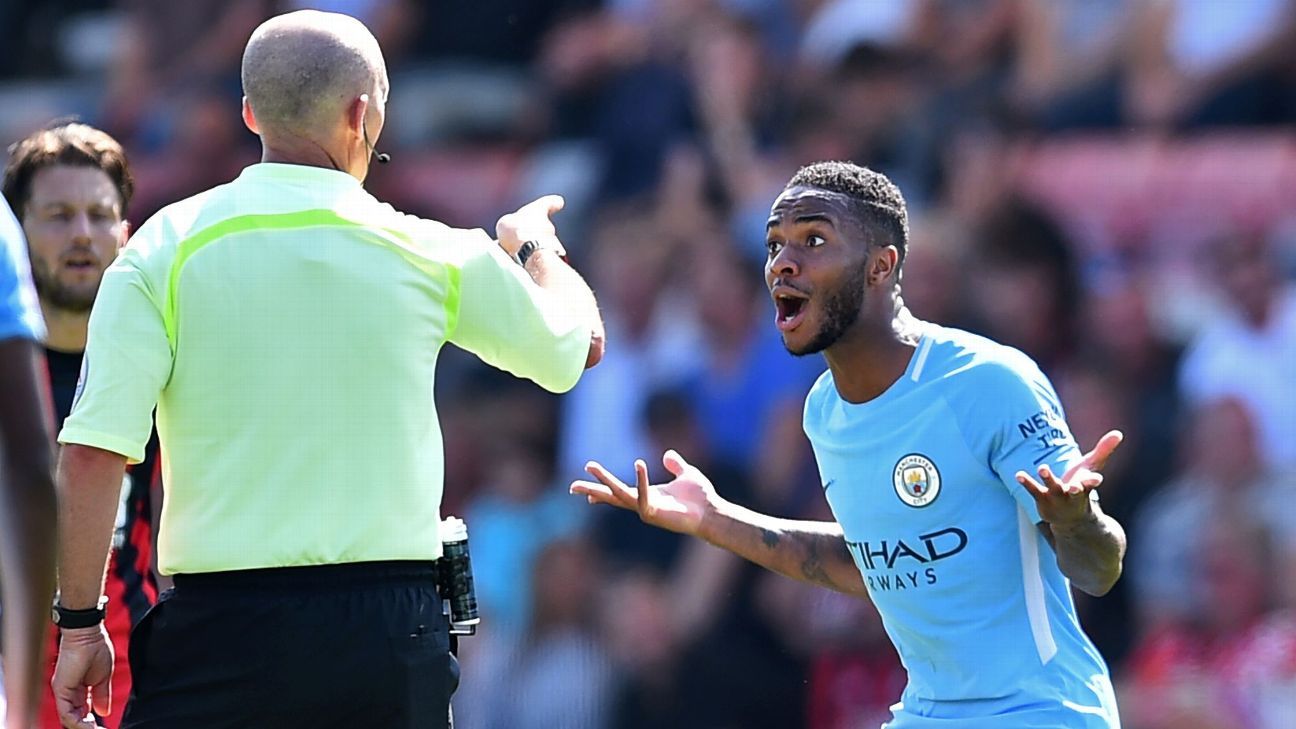 
The story of Manchester City’s 2-1 victory over Bournemouth should have been how Pep Guardiola’s team had managed to grind out three points despite not playing very well. The visitors saw a lot of the ball on Saturday, but rarely tested goalkeeper Asmir Begovic beyond a couple of efforts straight at him and Nicolas Otamendi’s header off the post.

Instead, the story is of how City have had two farcical red cards in two matches. Raheem Sterling’s dismissal for celebrating his goal left him, his manager, and the fans scratching their heads — and frustrated that, with no way to have it overturned, the winger now will miss the match with Liverpool in early September.

It rubs salt into the wounds that Guardiola was already without right-back Kyle Walker for the game at the Vitality Stadium because of an equally poor decision from Bobby Madeley, sending off the full-back for absolutely nothing in the 1-1 draw with Everton.

Last season, the manager was frustrated by poor officiating, so he may well be feeling like nothing has changed as he begins his second campaign at the helm.

When Gabriel Jesus dispossessed Nathan Ake late in the first half, the Bournemouth defender tripped the striker in an attempt to win back the ball. As the final defender and with Jesus clean through on goal, referee Mike Dean could have seen fit to show a red card there — but instead allowed the benefit of the doubt to Ake, some would argue quite sensibly. While Jesus would have got to the ball before anybody else, he was still far enough away from goal to have to think about what to do next.

When Steve Cook thundered through Jesus by the corner flag in the second half, Dean chose to keep his cards in his pocket. In fact, he awarded a throw-in — again giving the benefit of the doubt to the Bournemouth man, who had taken the ball first in his challenge, but who also arguably had used excessive force in the tackle and could have been sent off for the same thing on another day.

So why was that benefit of the doubt removed for Sterling, who had just won the game for his team? If football is all about emotion, why was the winger punished for showing his ultimate joy at bagging a last-minute winner? Neither he nor City had been particularly good, which serves only to increase the relief and excitement he and the fans were feeling.

The majority of those City fans had left Manchester at an ungodly hour for the first half of a 500-mile round trip. They’d watched their team put in a frustrating performance and thought they’d be spending the five-hour drive home sulking, only to be rewarded with a late winner. Of course, emotions erupted.

Leaving the field of play to celebrate is not a yellow card offence, according to the laws of the game for 2017-18, but climbing onto the advertising boards or approaching fans in a manner that could cause safety concerns is. Sterling did neither.

The goal had been scored at the end where the visiting fans were, so it seems perfectly reasonable for him to head in their direction after winning the game at the death. Equally, he was with several of his teammates — and he wasn’t the first to get to the area where the supporters were on the field — but he was the only one punished.

Where were the yellow cards for Fernandinho and Benjamin Mendy? They’d both done more to exacerbate the situation than the goal scorer had, one by leading the players into the fans and the other for winding them up. Sterling, who was deemed the only one of City’s players to be over-celebrating, can consider himself very unfortunate.

Many will point to his first yellow card being irresponsible as the bigger issue. Of course, the winger’s booking for a trip on Harry Arter was daft and a show of frustration. However, he couldn’t reasonably have expected to have seen a yellow card for a last-minute celebration the type of which will go unpunished at other times in the match, never mind when it’s a crucial goal seconds from time.

If scoring a last-minute winner in the way City’s players did is now deemed to be causing safety concerns then the game’s lawmakers need to sit down and reconsider or they risk becoming the fun police.

City have finished a man light in two of their three games this season, to red cards that carried a suspension they couldn’t appeal. Can anyone really blame Guardiola for being frustrated by the bad calls his side have been on the receiving end of so far?