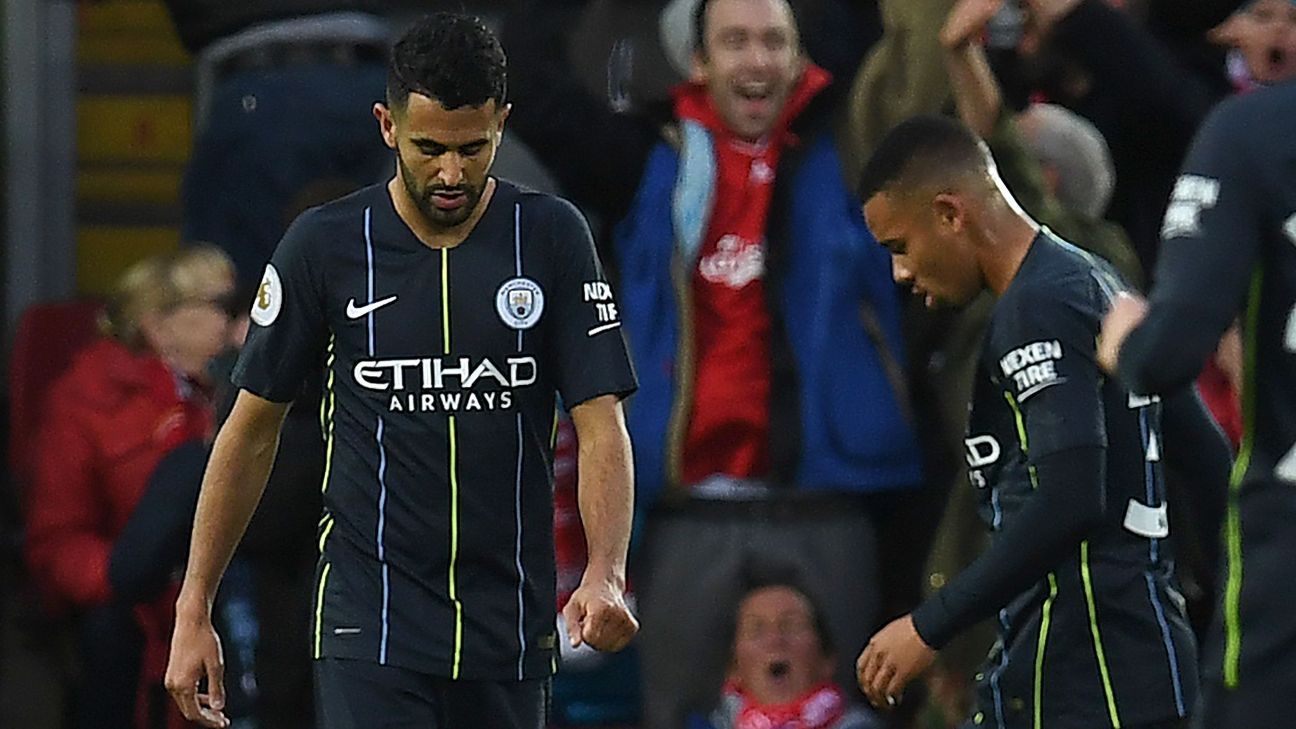 
With the game at 0-0 and just a handful of minutes remaining, Riyad Mahrez had a glorious chance to end Manchester City’s abysmal record at Anfield, where the champions haven’t won for 15 years.

Virgil van Dijk had been penalised for bringing down Leroy Sane in the box and City’s support, massed at that end of the ground, could barely hide their excitement — finally an opportunity to bury some of those memories, the decades of embarrassment and pain at this unyielding place. The party would be long and loud.

As Mahrez stepped up, television viewers were treated to a harrowing graphic showing the Algerian’s previous five attempts from the spot — three of which did not reach their intended target. The sixth would follow that trend. From the instant the shot left the winger’s boot it was destined for the crowd. It was still rising as it hit Row 30’s dismayed occupants.

Mahrez hung his head in shame — a shame made worse by the fact he had pushed teammate Gabriel Jesus aside in order to take the kick himself — and it rather summed up his start to life at the club.

Since arriving this summer as City’s most expensive transfer ever at £60 million, he has had a mixed time of things. Starting in the Community Shield romp over Chelsea, he soon found out that any slackness in Guardiola’s team sees you relegated to the bench quicker than you can attempt to say “sorry, boss” in Catalan.

With Sane, Raheem Sterling, Bernardo Silva and two marauding full-backs already in situ, being a winger at City brings with it a duty to battle for your place with some of the Premier League’s finest performers.

But early signs with Mahrez are that he has been trying a little too hard to impress. In the first few games, his tendency to carry the ball too far, try one trick too many and hold off delivering to a teammate in the hope of opening a shooting chance for himself has been clear.

Mahrez has proved himself far from weak-hearted, however. A willingness to play his own game is the positive side of the rather negative point just made. He is brave and evidently full of conviction that he can cut it in the champions’ squad. A misplaced pass here and a failed shot there have not stopped him getting straight back into position and trying again. Hiding is not an option in his mind.

He had been similarly forceful when he made the switch from Le Havre to the East Midlands in 2014 to join Leicester in the Championship. There it only took him a few substitute appearances before he forced himself into manager Nigel Pearson’s first-team plans.

Having made it into the team that gained promotion, the Algerian’s first season in the top flight was one long struggle to adapt to the club’s new environment. Leicester’s great escape from relegation, winning six of their last eight games, saw him come to life, however, and the following season he reached altogether new heights as Leicester stormed to the unlikeliest of Premier League titles and he landed the PFA Players’ Player of the Year award.

In ruminating on the extreme pressure that kickstarted his wonderful form at Leicester, Mahrez may do well to reflect on what made him such a special player back then. Yes, his individual skills were incredible, but it was the team ethic that bonded the Foxes together.

While harnessing those exuberant skills on either flank, he has to come to terms with the Guardiola way at City. He is now just a small part of a well-oiled machine, rather than one of its essential cogs. Learning to channel those skills for the best use of his teammates may yet be the most important transition Mahrez will make in a career that has been on a steep rise for much of his time in England.

When he pushed Jesus away from the vital penalty kick at Anfield, Mahrez was making an individual statement born out of frustration due to his start to life at City. While Guardiola would later take the blame — saying: “I had been watching him [Mahrez] take penalties all week in training and it gave me a lot of confidence. Jesus wanted to take it. I apologise. It was my decision” — when you make that kind of statement you had better make sure you deliver.

Mahrez has a long way to go before he can consider himself top dog among City’s stars and his penalty miss only confirmed that twofold.