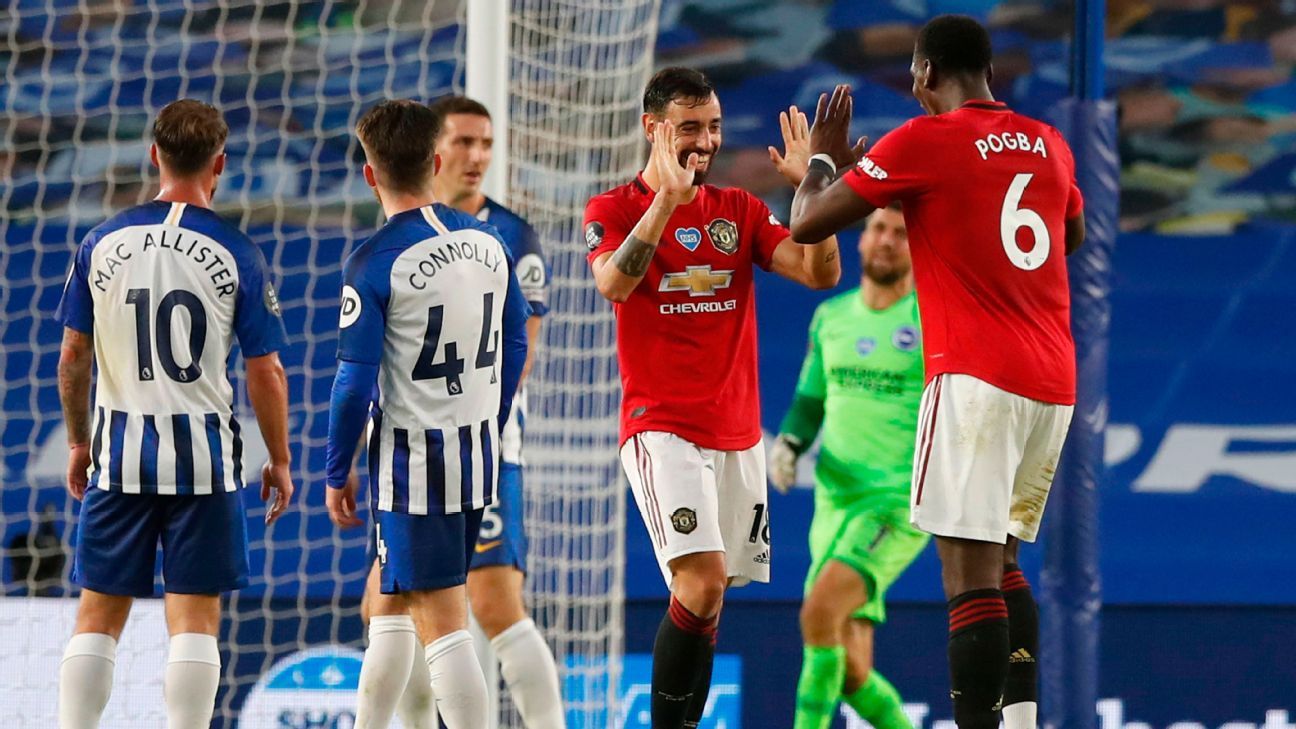 Bruno Fernandes is getting sick of Paul Pogba. Not the fact that he gets to play alongside him — that part is going well. It’s the questions about the Frenchman that are driving him mad.

Pogba doesn’t do a lot of interviews — especially at the moment — for fear that the bulk of the enquiries will not be about football at all, but rather about his future, Real Madrid, Juventus and his agent, Mino Raiola. Instead, the host of international broadcasters who have rights to speak to a player before and after every United game are often given Fernandes and, usually, attention turns to Pogba.

“I don’t want to talk about me and him too much,” said Fernandes after starring in Man United’s recent 3-0 win at Brighton. “It’s not fair on the others in the team.”

It’s a fair point because Fernandes and Pogba will not be able to transform United on their own. But a midfield that includes an axis of two of the most inventive, creative players in the world makes Ole Gunnar Solskjaer’s team a different prospect. And that’s why there are so many questions.

Fernandes and Pogba have started three games together, with United winning all three by a combined score of 11-2. It’s not been a bad start, and it helps that the pair have developed an understanding on and off the pitch quickly. When Fernandes moved to Old Trafford from Sporting Lisbon in January, it was Pogba who helped him decide where to live.

On the pitch, Fernandes said, they “think the same way.” In simple terms, good players like to play with good players, and that has not always been the case for Pogba since his return to United from Juventus in 2016.

There is a theory among some of Solskjaer’s coaching staff that United’s problems in midfield under Jose Mourinho and during the early part of the Norwegian’s reign made Pogba regress. Weighed down with the expectation that he had to be creator-in-chief, he would often try too hard and sometimes see things that were not there. Pogba would be reprimanded by Mourinho for losing the ball, not “smelling danger” and letting opposition runners breeze past him.

Solskjaer, by contrast, has focused on Pogba’s attacking output. The emphasis is on keeping it simple, moving the ball around to others in better positions and waiting for the chance to hit a longer pass or create a chance. “Patience” is a key word when Solskjaer is patrolling the training pitch at Carrington.

Against Bournemouth on Saturday, Pogba had 91 touches and completed close to 90%of his passes. In the same fixture under Mourinho in 2017 — a 1-1 draw despite playing against 10 men for 45 minutes — he saw more of the ball (113 touches), but his pass completion was down to 81%.

At different times since the restart, Fernandes, Anthony Martial and Mason Greenwood have grabbed the headlines, but Pogba has been quietly impressive. It has helped Pogba that Fernandes is so energetic — only Aaron Wan-Bissaka has covered more ground than the Portugal international’s 39.4km since the Premier League returned — but Nemanja Matic has also played his part.

Matic looked close to the exit in January but has since been given two separate contract extensions — the second a new three-year deal — after a run of good form during United’s 16-game unbeaten run. Since Solskjaer has been able to pick Fernandes and Pogba together, he has trusted Matic with protecting the back four rather than the more forwarding-thinking Scott McTominay and Fred.

When United needed a goal in their FA Cup tie with Norwich, Solskjaer threw on Pogba with 12 minutes to go, but did so along with Matic. United have averaged a goal every 25 minutes during the 321 minutes Pogba and Fernandes have been on the pitch together, but they’ve also only conceded twice during the same period and for that, Matic deserves credit.

Mark Ogden believes Sancho will move to Man United eventually, it’s just a matter of when.

Back to full fitness after a troublesome ankle problem and playing in a team scoring goals and winning games, Pogba is feeling more comfortable at Old Trafford than he was 12 months ago, when he used a promotional event to say it might be time for a “new challenge.”

With a year and an option left on Pogba’s contract, it is becoming increasingly likely he will stay for at least another season, which raises the possibility that United could look to divert funds earmarked for Jack Grealish, Donny van de Beek or James Madison and spend instead on a centre-back to play alongside Harry Maguire. Bournemouth’s Nathan Ake, Aston Villa’s Tyrone Mings and Milan’s Alessio Romagnoli are among the names in the frame.

Pogba and Fernandes are partly responsible for the optimism at United, but there have been enough false dawns since Sir Alex Ferguson retired in 2013, and fans won’t be getting carried away just yet. Beating Sheffield United, Brighton and Bournemouth is one thing, but the real test of Solskjaer’s new midfield will come against Chelsea in the FA Cup semifinal, or a possible Europa League final with a place in the Champions League on the line.

The early signs, though, are encouraging, and that means more questions about how good they could be.