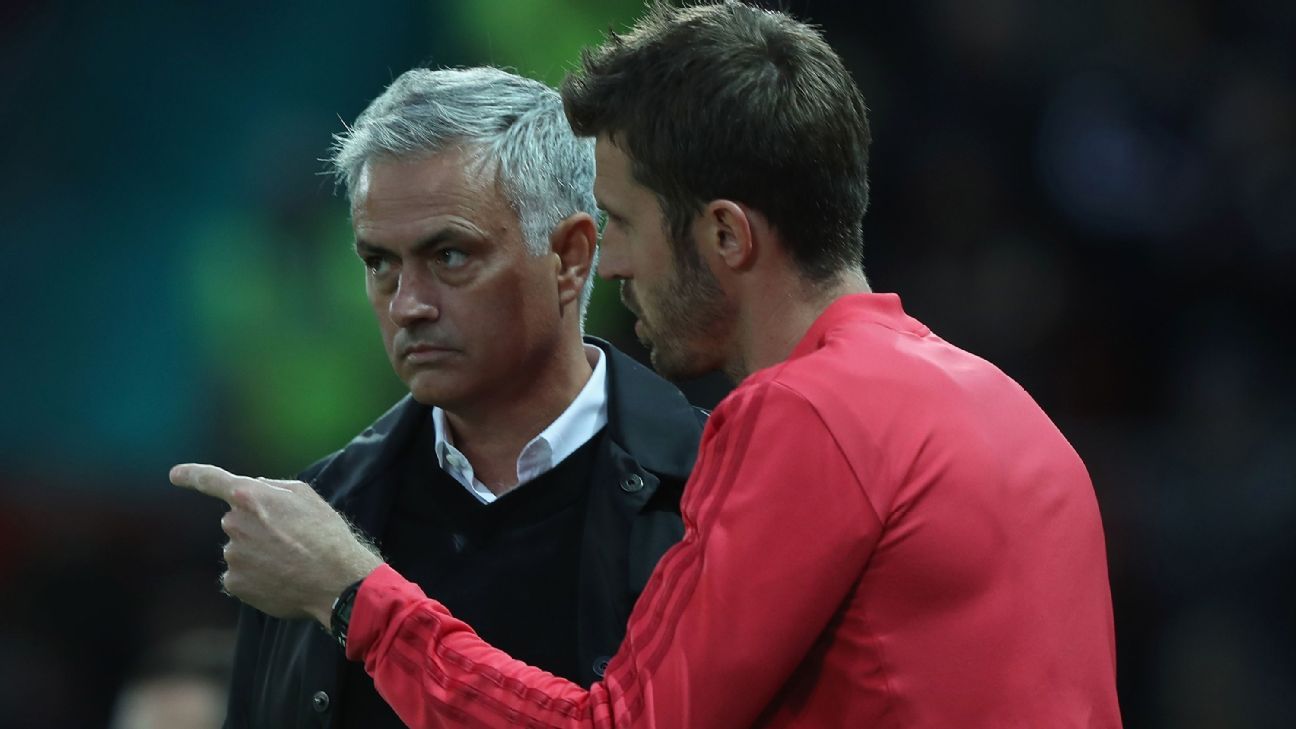 
MANCHESTER — Michael Carrick ended his 19-year playing career in the summer to take his first coaching job at Manchester United.

As a player he won five Premier League titles and the Champions League, as well as picking up 34 caps for England. But in his new autobiography, “Between the Lines” — the profits of which will go to the Michael Carrick foundation — the 37-year-old has revealed things did not always go as smoothly off the pitch, opening up about his battle with depression following the 2009 Champions League final defeat to Barcelona in Rome.

In an interview with ESPN FC, Carrick talks about his new book, the ups and down of his career, and how he is learning for a future career as a manager.

Q. You grew up in Newcastle and started your career at West Ham, but Manchester United seems to run all the way through the book…

A. When I was doing the book I’d remember little things and I’d think ‘that was United actually and that was United as well.’ I was a youth team player cleaning the away team dressing room and I remember Sir Alex walking down the corridor with his blazer on and the crest. I was in awe, trying to take it all in wide-eyed when I was a 16-, 17-, 18-year-old. I had no ties to United. In Newcastle, people don’t support Man United you know! It’s Newcastle and you hate the rest. I certainly wasn’t a fan at all. That’s obviously changed in time, but strangely there was always that snippet that seemed to be United, United, United.

Q. What’s Gary Neville going to say when he finds out you had a Liverpool shirt as a kid?

A. I think there could be a few people surprised at that one! That’s the beauty of growing up as a kid supporting football. You just follow whatever you’re going to follow. You look back and think ‘how does that work?’ That’s the innocence of being a kid I think.

Q. Can you pinpoint the moment you believed you might make it?

A. Not really until I came to United that I thought about winning things. The 2006 World Cup was the summer I came to United so the England thing was kind of ongoing. Getting to the World Cup was massive but it wasn’t until I got to United that I had that feeling that winning was a possibility. At Tottenham we might have had a good cup run but we weren’t actually thinking ‘we can win this.’ It was about how far we could go or ‘could we get into the Champions League?’ That changed dramatically for me when I came to Old Trafford and seeing what was kind of expected here and the approach of the lads and the manager. It was just a different level completely.

Q. What was the most enjoyable part of your career to re-tell?

A. Not so much the obvious: like talking about Moscow [winning the Champions League in 2008]. Maybe the feeling of winning the FA Cup final [in 2016]. Finally winning that and having the kids there with me celebrating. The party afterwards and having all my family there at a time when I knew I was coming towards the end, thinking that might have been the last trophy I won. That was a special moment, a special night for me.

Not necessarily the game; the game is irrelevant, it’s just the fact you’ve won it and the memories after that. Seeing how much it meant to the kids is probably the overwhelming memory I take from it. You might think it was the game or walking out at Wembley, Jesse’s [Lingard] goal — but that’s not the main thing that sticks in my mind.

Q. You seem to mention the bad games as much as you do the good ones even though there weren’t that many.

A. It’s the bad ones that stick with me. That’s something that I’ve learned over the years from speaking to other lads, it’s the ones that haven’t worked out that really keep hold of you and niggle away at you. You can’t shake it.

Q. You have opened up about depression in the book. Did you find it difficult to talk about?

A. Not to talk about, no. It was never something that I thought ‘I can’t talk about this, I don’t want anyone to know.’ It was quite a natural thing for me. That’s how it was, that’s exactly how I felt at that time. I’m not ashamed of it. I wish I’d dealt with it better in some ways; I wish it didn’t last as long; I wish I wasn’t so low, but that’s how it is.

People talk about the England squad, am I frustrated at not playing more for England, it’s just how it was. That’s the story. When I was down, it was a tough time. You keep asking yourself the question ‘why am I feeling like this’ and beating myself up for feeling like that knowing that I’ve got two healthy kids, lovely wife, couldn’t be happier. Playing for Man United, we had just come off winning three leagues and you’re thinking ‘what’s wrong?’ But I couldn’t shake it off.

It started in Rome, losing the Champions League final [in 2009] and it was a bizarre year. It was niggling away and I couldn’t shrug it off. I came out the back of it in late 2010 and all of a sudden everything is rosy again and I’ve not looked back. When you get out the other side it’s a relief and everything is a bit lighter and a bit happier and the sun is shining a little bit more.

Q. How hard has it been to go from teammate to coach at United?

A. Yeah, it’s a difficult balance to get but I think the lads have been great. It’s a respect thing both ways. I’ve stepped out of that now and they need their space. If something is going on I can’t be like ‘what’s going on boys?’ I’ve got to withdraw from that. And they’ve respected my position and not made it uncomfortable for me at all. I’ve enjoyed it. It’s felt quite natural. The way my career ended and going into this felt quite natural and there hasn’t really been a time when I’ve felt in the middle or uncomfortable.

Q. You’ve played under Harry Redknapp, Sir Alex Ferguson, Sven-Goran Eriksson and Jose Mourinho, have you tried to take bits from all of them into your coaching?

A. I’ve tried to. You look back and you think ‘why did I not take more in?’ When you’re young you’re just focused on football and the rest of it, you don’t really understand why the manager is doing that. It’s not until you look back and realise that he’s been quite clever with that. That worked or that didn’t work.

Subconsciously you’re storing things and you go back to them. Certainly every manager I’ve played under you take things from them. That’s just part of gaining all that knowledge over the years. Some good, some not so good, but it’s all part of the process.

Q. Were you able to learn things from David Moyes and Louis van Gaal, even though it didn’t work out for them at Old Trafford?

A. Yeah, 100 percent. It doesn’t always have to be the great things and the desperate things, there are bits in the middle. It could be anything. How they are around the lads, conversations, how they approach games — it could be absolutely anything. You’re just looking for little bits all the time to try to improve and to use when I need them.

Louis, for instance, I learnt loads off Louis. Tactically, position specific stuff and really small details about the game that I hadn’t thought too much about before and that was towards the end of my career. It was refreshing and opened my eyes to something else. You never stop learning.

Q. It must have been quite a contrast to go from working with Sir Alex, Van Gaal and then Mourinho?

A. They’re very different characters. I think it’s obvious for everyone to see that. That’s the beauty of football. People have asked me ‘what type of manager am I going to be’ but you’ve got to be yourself. If you try to be something else, it’s forced and it’s not real.

Sir Alex, the way he played, he was a risk-taker. He gambled with his team selections at times and the way he played, that was just him. Other managers might be a bit more cautious. Louis was more methodical and a bit more calculated with his teams. He studied the opposition and it was like a game of chess. That was his style. You’re just judged on whether it’s successful or not. It’s not necessarily right or wrong, it’s about the person you are.

Q. What’s life like as a coach under Mourinho?

A. I had been thinking for a while about going into coaching. I wasn’t playing that much for the last year or so, after the heart thing especially. But until you actually flip, it’s so different. So different. Preparing for the week ahead, a week’s training, preparing for a game — how I prepare now is totally different to how I prepared as a player.

Now I’m as close to the manager as you can be and supporting him. I’m seeing how he works, how he responds to things and learning from him all the time. Certainly, it’s a big difference.