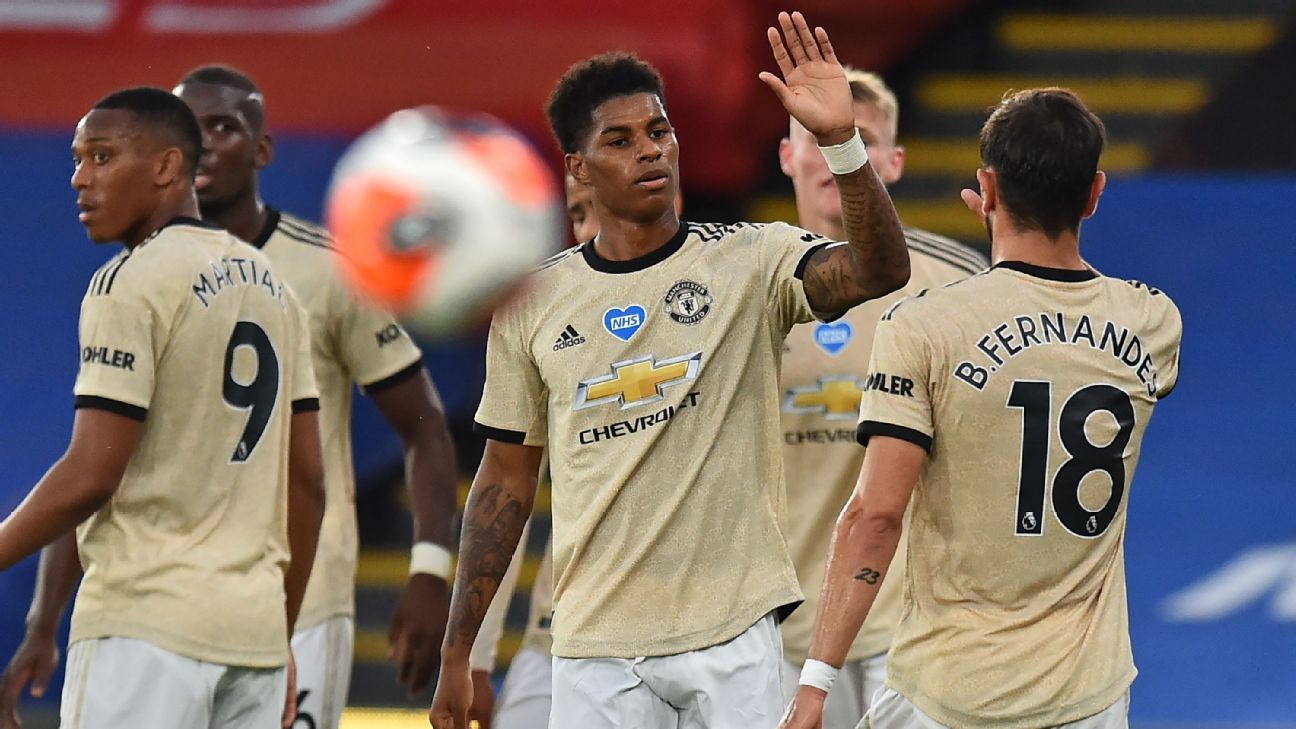 
LONDON — It is easy to understand why Ole Gunnar Solskjaer is so reluctant to change his Manchester United team, but how many more times can this lineup go to the well?

United were below their best in this 2-0 win over Crystal Palace at Selhurst Park, needing the sort of officiating luck VAR was designed to eradicate to earn and then preserve a lead given to them in first-half stoppage time by Marcus Rashford. Their second goal was a perfect example of why Solskjaer continues to place such high demands on Rashford, Anthony Martial and Bruno Fernandes to maintain the club’s push for Champions League qualification. Rashford skipped past two Palace players with delightful ease, finding Fernandes in the left channel. He fired a pass into Rashford, who showed a deft touch to lay it off first time into Martial’s path, and the Frenchman curled home a shot that finally killed this game as a contest.

It was a wonderful move, the type of goal that has become a Solskjaer trademark and precisely the sort of combination play they will need to continue producing if this season is to end in success. Yet they were in a position to execute such a devastating attack only after benefitting from two extremely tight calls, the second of which left Palace boss Roy Hodgson laughing in disbelief, sat leaning back in his dugout.

Palace chairman Steve Parish could not hide his disgust at Wilfried Zaha being denied what he described on Twitter as a “stonewall penalty” for a challenge from Victor Lindelof moments before United counter-attacked to open the scoring. VAR official Simon Hooper decided on-field referee Graham Scott had not made a clear and obvious error, believing Lindelof may have touched the ball as Zaha motioned toward him in performing a step-over.

Parish’s fury was no doubt compounded by Jordan Ayew being denied an equaliser by the tightest of VAR calls, replays showing the Palace forward’s toe was just behind Aaron Wan-Bissaka‘s outstretched leg on the opposite side of the pitch before he slid the ball home at the back post.

Palace were the better side early on, staying compact between defence and midfield to deny Fernandes, Martial, Rashford and Mason Greenwood the space they relish to receive passes on the half-turn. Greenwood was substituted after a quiet evening and although Fernandes hit the post just before Martial’s second, this was one of the Portuguese’s less influential displays after a stunning run of form since arriving from Sporting Lisbon in January.

Any fatigue would be understandable given this was United’s eighth game in 28 days and Solskjaer had named the same lineup in their previous five Premier League games, the first time the Red Devils had done so since Sir Alex Ferguson did it in 1993. He made only two changes here, and one of those was enforced with Timothy Fosu-Mensah starting at left-back due to injuries Luke Shaw and Brandon Williams sustained in Monday’s 2-2 draw against Southampton. Scott McTominay replaced Nemanja Matic to freshen up midfield.

United were perhaps unfortunate to concede as late as they did against Saints — especially given Williams’ injury left them with 10 men — but on that occasion they appeared to tire while Solskjaer’s safety-first substitutions invited further pressure. Against Palace, Solskjaer made only two in-game substitutions — Matic and Jesse Lingard for McTominay and Greenwood just after the hour mark — and in fairness the hosts did not rally much to cause him undue concern thereafter, Zaha going closest late on with a low drive that forced David De Gea into a smart reflex save with his left foot.

“We’re fine, we’re fit and the players are raring to go,” Solskjaer told ESPN. “They want to play again. Of course, anyone can hold their hands up and say, ‘I want to sit out this one.’ We’ve got players on the bench desperate to join in, but of course I was forced with Brandon and Luke not available today but Timothy did great. Scotty has been fantastic. He took a shift for Nemanja, so we’ve got enough players. We’ve had a chance over this period to take players off, we’ve been three goals up in many games after 60 minutes, so we’ve been fortunate in that respect.”

He will continue to be confident if Rashford and Martial in particular continue in this form. In a week when he became the youngest recipient of an honorary degree from the University of Manchester for his work convincing the government to extend free school meals over the summer, the 22-year-old scored his 17th League goal of the season. Only Jamie Vardy, Danny Ings, Pierre-Emerick Aubameyang and Mohamed Salah have scored more.

United ultimately responded well to Monday’s disappointment to remain in fifth place, and keep their destiny in their own hands given the final-day trip to Leicester City, occupying fourth on goal difference with Chelsea a point above the pair in third.

Solskjaer does have some difficult decisions ahead. He made eight changes for the FA Cup quarterfinal win over Norwich City, but the presence of Chelsea and the proximity of a trophy makes that a harder call at Wembley this weekend. Similarly, they could have as many as eight more games remaining should they progress in the FA Cup and Europa League in the coming weeks.

There are options available with Lingard, Odion Ighalo, Daniel James and Juan Mata among those able to freshen up the attacking positions. But the limited quality that quartet possesses is a further indication of the need to strengthen this summer if United are to compete with the best sides in four competitions next term.

There was no celebration at full-time. In fact, a few players dropped to the haunches, Fosu-Mensah stayed on the ground stretching out his muscles to avoid cramp after his first senior start with the club since May 2017.

United know there is still a job to do. They also know there was no point wasting any energy.