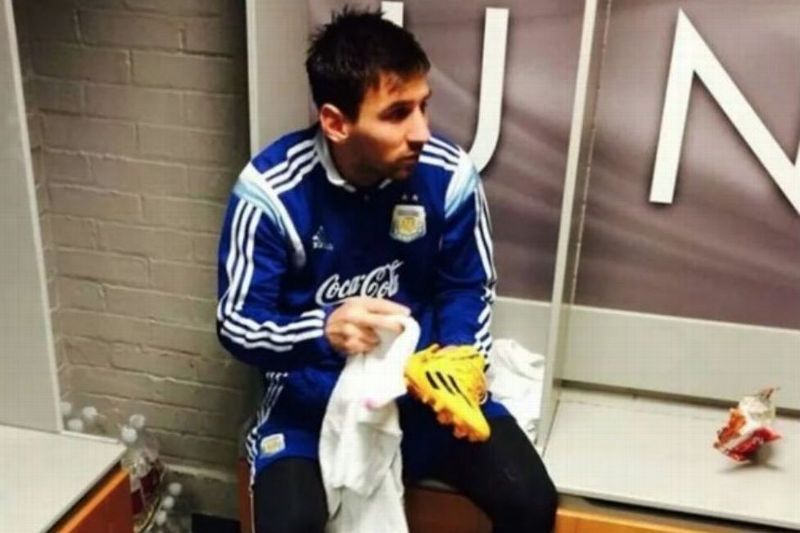 If Lionel Messi’s not too big to clean his own boots, then you can clean yours as well.

That’s the message at Manchester United’s academy, where a photograph of the Barcelona superstar taking care of his own footwear hangs from the wall.

Messi’s a natural choice to deliver a message to today’s youngsters. After all, along with former United star Cristiano Ronaldo, he’s taken the game to new heights — winning the Ballon d’Or five times, winning four Champions Leagues and scoring over 600 goals in an incredible career.

However, Messi’s message is more to do with humility than talent or hard work. The photograph shows him cleaning his boots — and not as a kid, but after a friendly between Argentina and Croatia at Upton Park in 2014.

Manchester United’s academy dressing room has a picture of Leo Messi cleaning his own boots to make sure the young players understand the importance of humility 👏 pic.twitter.com/5lEsqIfKE3

United believe the image is the perfect reminder to the kids hoping to break into Jose Mourinho’s first team that you can’t lose touch with reality.

And the club’s head of youth development, John Murtagh, says developing people is as important as creating footballers at the Premier League club.

“We have the footballing values here of attacking, free-flowing, exciting football and, as people, you want humility, an honest, hardworking person, someone who’s respectful,” Murtagh explained to The Times.

Former United midfielder Nicky Butt, now a coach at the club’s academy, doesn’t want the young players to get too hung up on the imagery of Messi, though.

“Everyone wants to be a No.10 now, a Messi,” he said. “That’s good because they all want to play the right football but people can’t forget how good Roy Keane and Steven Gerrard were; these box-to-box players that aren’t the modern academy [product now]. Academies are developing too many similar players.”