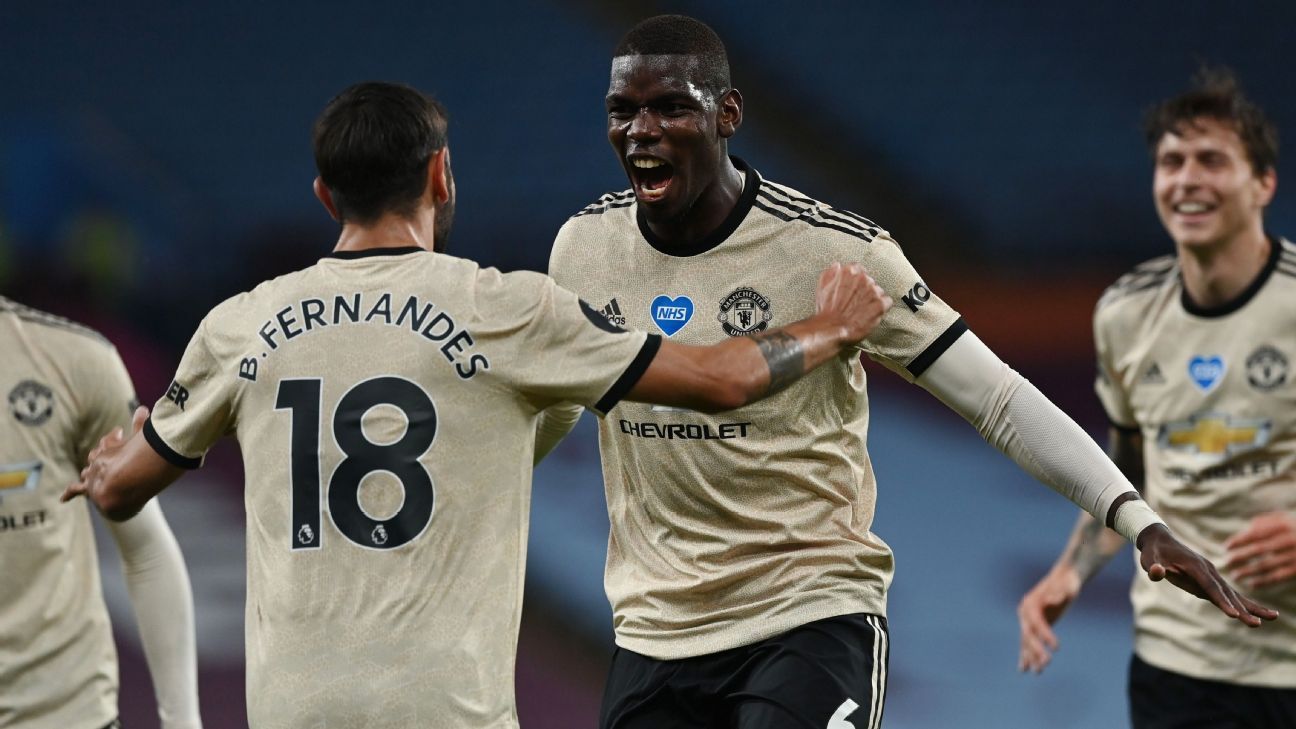 
BIRMINGHAM, England — There is something beginning to stir at Manchester United. After seven years of decline and drift since Sir Alex Ferguson retired as manager in 2013, Thursday’s 3-0 victory at Aston Villa was just the latest example of the upward trajectory of Ole Gunnar Solskjaer’s team.

Back in January, Solskjaer was fighting for his future as manager after back-to-back defeats against Liverpool and Burnley, but six months on, United are now 17 games unbeaten in all competitions and are heading for Champions League qualification. At this rate, with opponents being beaten out of sight on a regular basis, they will not need to rely on the back-door pass of fifth and taking Manchester City‘s place in the competition — if their neighbours have their two-year UEFA ban upheld by the Court of Arbitration for Sport (CAS).

In this kind of form, with teen sensation Mason Greenwood scoring again and Paul Pogba back on the scoresheet for the first time since April 2019, United could even finish as high as third if they continue to rack up the victories. But with the sun beginning to shine again at Old Trafford, the onus is now on United’s owners, the Glazer family, and executive vice-chairman Ed Woodward to seize the momentum and not allow the opportunity to return to the top slip through their fingers.

For all of the progress United have undoubtedly made in recent months, especially since the arrival of January signing Bruno Fernandes, there is still work to do to turn this squad into one capable of dethroning Premier League champions Liverpool and competing among the elite in the Champions League. But will the Glazers recognise the chance they now have to cut the gap and accelerate United’s return to the top table? Or will they allow the moment to pass and leave Solskjaer to take the long road back to where the club used to be?

With Liverpool manager Jurgen Klopp admitting that his club are unlikely to make significant signings and City’s recruitment plans dependent on the outcome of their appeal to CAS, Chelsea have seized this summer’s rare opportunity to get closer to the top two by signing Hakim Ziyech from Ajax and Timo Werner from RB Leipzig. They might yet sign Bayer Leverkusen‘s Kai Havertz, too.

United are favourites to sign Borussia Dortmund winger Jadon Sancho, but even if they land the England international, they will still need at least two, and maybe even three, key additions to be genuinely competitive next season. Because make no mistake, this United team still has flaws to correct.

The recent run has raised morale and belief, but since the resumption of football following the COVID-19 enforced shutdown, Solskjaer’s team has beaten only Sheffield United, Brighton and the three teams on course for relegation: Villa, Bournemouth and Norwich. Thursday at Villa Park, United were never in danger of surrendering their unbeaten run, with Fernandes, Greenwood and Pogba all scoring in an easy win. In fact, United could and should have won by more. Yet even during their five-game winning streak, United have looked vulnerable at the back, with goalkeeper David De Gea and captain Harry Maguire showing their frailties more than once.

United’s defensive record is the third best in the Premier League, with 33 conceded, but a centre-half with real pace could shave off maybe 8-10 goals a season and that would put them in the bracket of title challengers. That kind of player doesn’t come cheaply, but having invested £80 million on Maguire, they might need to spend a similar sum on a complementary centre-half to play alongside him.

In midfield, United were always in control against Villa, even though Nemanja Matic was caught in possession too often. Against better teams, the 32-year-old would have been punished, and although Scott McTominay is waiting in the wings, the addition of a defensive midfielder of the ilk of N’Golo Kante would instantly make United more formidable. Prior to this game, speculation surrounding Villa’s Jack Grealish with a move to United had intensified, but on this evidence, the midfielder is not the answer for Solskjaer’s team.

With Fernandes and Pogba, United are already blessed with world-class creators in midfield and, while Grealish has promise, he is still some way short of being a player capable of making a difference at the highest level. Thursday was the perfect case to that point, as in a game his team desperately needed to win, Grealish failed to make any impact.

Villa, on this display, are heading for relegation, but the picture is so much brighter for United. Qualifying for the Champions League will increase Solskjaer’s transfer budget and make United even more attractive to prospective signings, so they should be pushing at an open door when it comes to making themselves better.

But it is down to the Glazers now. Solskjaer has given United a platform on which to build a winning team again. Now is the time to take advantage and get back to the top.