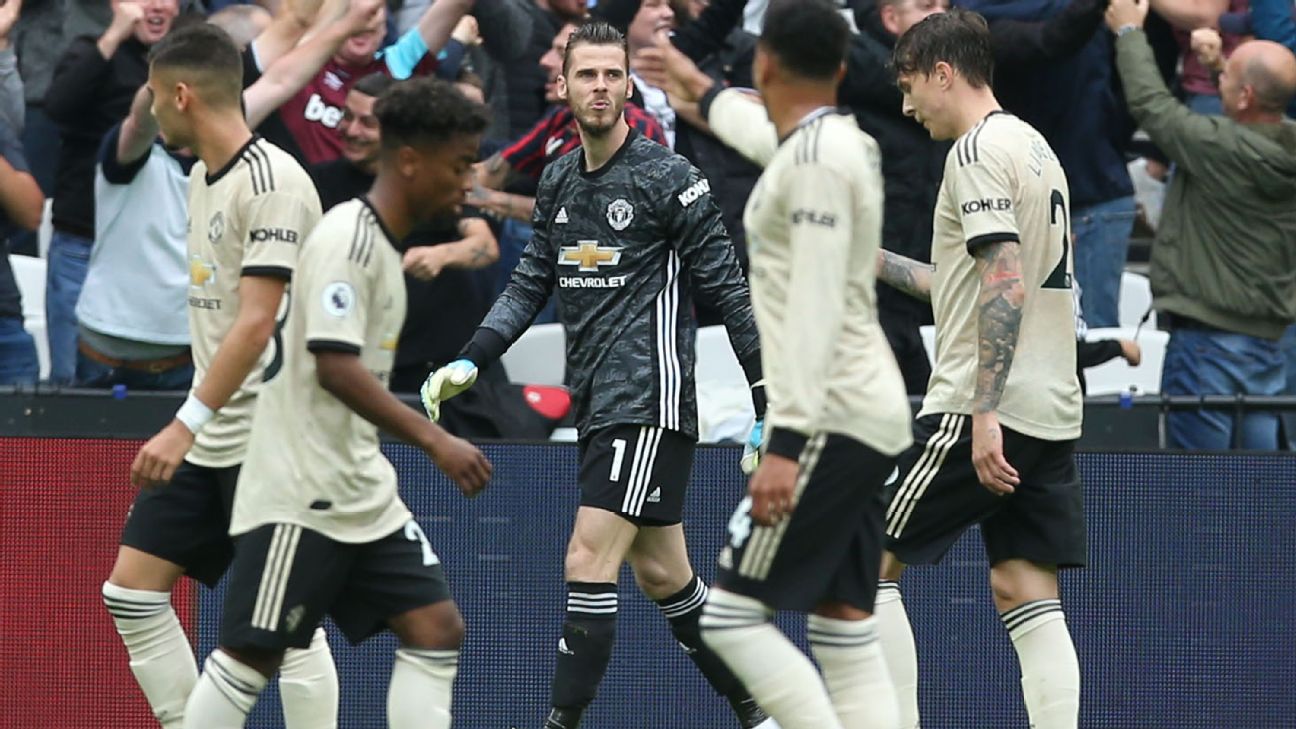 
LONDON — There was a time when Manchester United would lose at places like West Ham and it was considered a shock. Not anymore.

They lost at the London Stadium last season and, on the basis of that and Sunday’s 2-0 defeat, it is likely they will lose here again before re-establishing themselves as Premier League title challengers. It has been a long six years since Sir Alex Ferguson retired a champion, and the road back to the top does not look like it’s coming to an end soon.

The truth is the United fans, who travelled south from Manchester early on Sunday, did not learn anything new. Ole Gunnar Solskjaer’s team is, for the most part, capable defensively but does not create enough chances or score enough goals. It was the same against Leicester eight days ago and, indeed, against Astana in the Europa League on Thursday.

While both of those matches ended in 1-0 wins, this time it was two West Ham players — Andriy Yarmolenko and Aaron Cresswell — who engineered the only moments of genuine quality and United were beaten instead of scrapping out a narrow victory. Solskjaer can have no complaints and the bottom line is that there will be more days like this before his side turns a corner.

They kicked off having scored more Premier League goals versus West Ham than against any other team, but that is a stat from a different era. This United lined up without an away win in any competition since March — some 200 days ago at Paris Saint-Germain — and without a clean sheet outside Old Trafford since visiting Fulham in February.

They are still waiting. This latest defeat equalled a club record of seven straight away games in the league without a win and meant they have scored more than one goal in only one of their last 11 league games.

The summer transfer business tells everything about the strengths and weaknesses of the squad. Solskjaer spent £130 million on Harry Maguire and Aaron Wan-Bissaka and there has been improvement defensively.

But Ander Herrera left for PSG and, with no replacement signed, United look weaker in midfield. More strikingly, forwards Romelu Lukaku and Alexis Sanchez departed for Inter, with only £15 million youngster Dan James coming in to offset the loss.

It should be no surprise, then, that United do not look like they will concede many but can be overrun in midfield and struggle to make things happen at the other end.

It said everything about the health of the squad that, for the final 10 minutes, United chased an equaliser with Jesse Lingard at centre-forward supported by James, Andreas Pereira and Angel Gomes. Marcus Rashford had already limped off to join a growing injury list that includes Paul Pogba, Anthony Martial, Luke Shaw and Mason Greenwood.

From the point at which Rashford exited, the only team that looked like scoring was West Ham. And, with six minutes remaining, Cresswell delivered with a wonderful free-kick from 25 yards to add to Yarmolenko’s 44th-minute opener and end any lingering uncertainty about the result.

Solskjaer insists that this is just the first step of the rebuild and has said repeatedly that he cannot transform United into title challengers overnight. On that, he is right. Next summer he will look to sign a new midfielder and another forward, but the question is whether he will get time to implement the second phase of his plan.

He has gambled that executive vice-chairman Ed Woodward and the Glazer family see things as he does, but club accountants will be aware that another season outside the Champions League will result in a cut in the money they receive from kit manufacturer Adidas. After six games, they are seventh in the table with games against Arsenal and Liverpool to come before the end of October.

“This group, they want to do what we are trying to do,” Solskjaer said at full-time. “There are key moments in games and maybe a bad decision or pass but the attitude and desire is there — that is not the problem. It is the quality in our decision making and execution.”

The West Ham fans inside the London Stadium spent most of the game chanting  “You’re not famous anymore” at away supporters tucked in the corner. United are still famous — enough to still attract huge sponsorship deals — but in Premier League terms, they are no longer special.

That title belongs to rivals Manchester City and Liverpool, with Solskjaer’s side United among another six teams who could finish this season anywhere between third and eighth. Asked before the game about his former club’s prospects, Jose Mourinho said on British broadcaster Sky Sports that he expected them to finish between fourth and sixth; it is hard to argue with that assessment.

The truth is that fourth and a return to the Champions League would be a success. Roy Keane, in the same studio as Mourinho, suggested that that would never have been accepted in the United dressing room of which he was part.

That, though, was 20 years ago. This is a different time and victories over West Ham, let alone title challenges, are no longer a given.