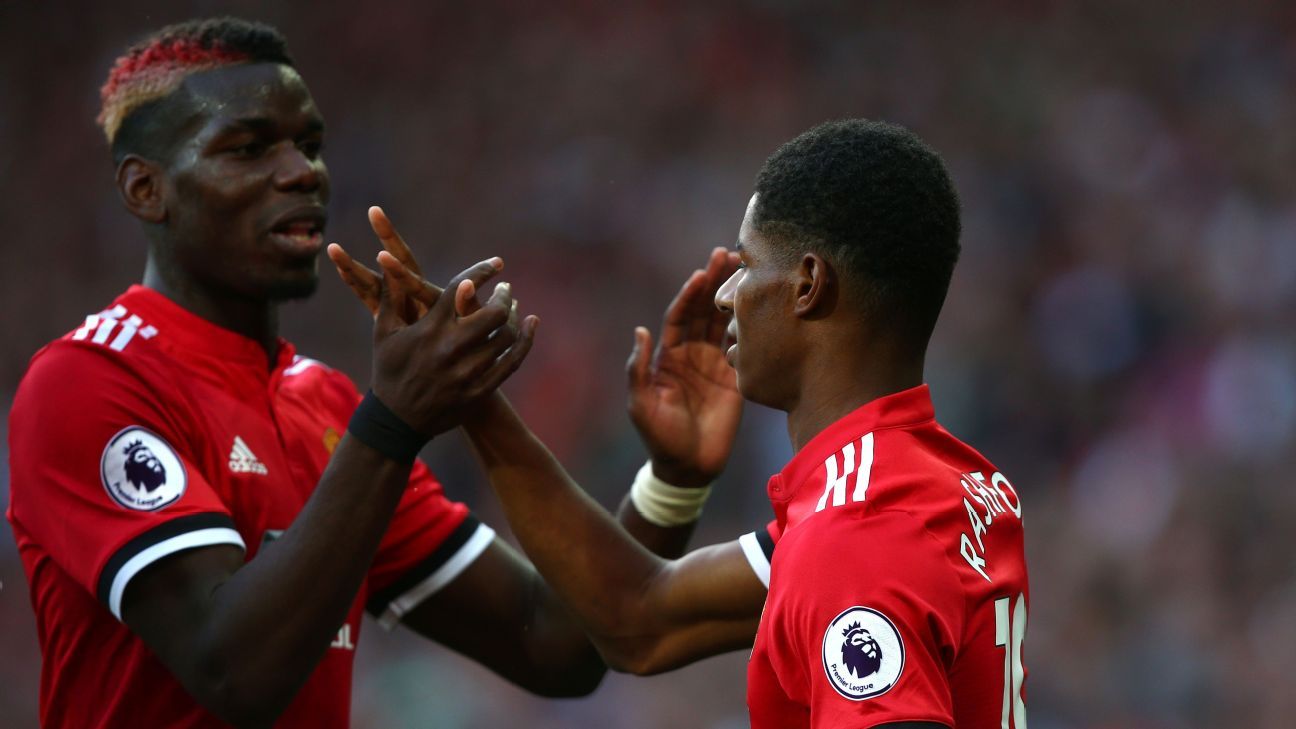 
Leicester City came to Old Trafford with the apparent aim of frustrating free-scoring Manchester United with a draw, yet the home side still prised Leicester open for a 2-0 victory — a performance that, in its own way, was their most important and impressive of the season so far. Breaking down teams that sit deep is something that United have not been so good at in recent years, and this win — provided by two late strikes, the first of the season from Marcus Rashford and Marouane Fellaini — was hugely encouraging in that respect.

Patience, patience, patience. Even after United striker Romelu Lukaku’s penalty kick was saved early in the second half, United did not stop playing the ball from side to side, looking for room wherever they could. They did not succumb to frustration and were duly rewarded.

They struggled with their delivery from wide areas, and Daley Blind was a particular culprit. Also, the failure of their left-backs to drive into the final third meant that Leicester were very happy to defend narrowly for long periods of the game.

9 — Jose Mourinho got this absolutely right. He started with the in-form Anthony Martial, rewarding him for his recent late goals, and then turned to Marcus Rashford, who scored almost immediately after coming on. Mourinho’s second and third substitutes, Fellaini and Jesse Lingard, combined with Rashford to clinch the game. Mourinho also kept faith in the tactics he had chosen from the start and in his players to break Leicester down. Three wins from three, 10 goals and six different scorers: This is an excellent start for Mourinho and United by any measure.

GK David De Gea, 8 — Executed one outstanding late save with his foot from Andy King, showing how intense his concentration was throughout. Came to claim the ball well whenever needed, too: it is strange to think that this was once a weaker part of his game.

DF Antonio Valencia, 7 — Was never truly troubled in defence but should have done more with the space before him. Though he moved well into space for his teammates, his final ball (particularly his crossing) was too often inaccurate.

DF Eric Bailly, 8 — After making an interception on Leicester’s Jamie Vardy in the first half, the England forward played with poise, skill and power.

DF Phil Jones, 9 — He had a difficult assignment in handling Riyad Mahrez but always forced the quick and dangerous winger wide into nonthreatening areas and cleared his lines with ease and precision all game.

DF Daley Blind, 6 — Should have been more precise with his delivery and more ambitious with his movement, given the extent to which Martial was troubling defenders ahead of Blind and opening up space for him to exploit.

MF Nemanja Matic, 8 — Quietly dominated midfield. Leicester largely sat deep, but Matic was essential in maintaining the tempo of United’s play, retaining the ball well and then passing and moving forward with promptness.

MF Paul Pogba, 9 — Constantly involved, trying several attempts from distance in the first half to rouse his team, completing a very high percentage of passes, and always looking for room in the final third. He appears truly liberated in his play so far this season.

MF Juan Mata, 8 — Found room time and again in the final third and was narrowly offside with a finish of which an elite centre-forward would have been proud. His clever movement was crucial to wearing Leicester down.

MF Henrikh Mkhitaryan, 8 — Provided yet another assist (his fifth of the season) for United’s vital opening goal. Played the ball into Leicester’s final third with great frequency and subtlety, though the full-backs did not take full advantage.

MF Anthony Martial, 7 — Looked bright and ambitious in his wide role, operating more as an inside forward than a winger. Cut inside often looking for the final ball, and though he did not score, his dribbling and movement were key in breaking down Leicester’s resistance.

FW Romelu Lukaku, 7 — The irony is that he had perhaps his most well-rounded game so far for United, holding the ball up very well and moving play on quickly while taking up some fine positions. However, he will still be largely judged by his poor penalty kick early in the second half, which was swatted aside by keeper Kasper Schmeichel, who was having a game for the ages until conceding Rashford’s soft opener. United look so much more threatening with Lukaku at the peak of their attack.

MF Marcus Rashford, 9 (for Mata, 66) — Changed the game almost immediately with a composed close-range finish, and then helped seal it with a through-ball that led to Fellaini’s goal. Superb.

MF Marouane Fellaini, NR (for Mkhitaryan, 74) — An often-maligned figure who has come into his own under Mourinho. Deflected Jesse Lingard’s shot home for the second goal and was even relaxed enough to back-heel the ball around by the end of the game.

MF Jesse Lingard, NR (for Martial, 75) — Came on and provided an assist, which was typical of the intelligence and purpose of his runs.