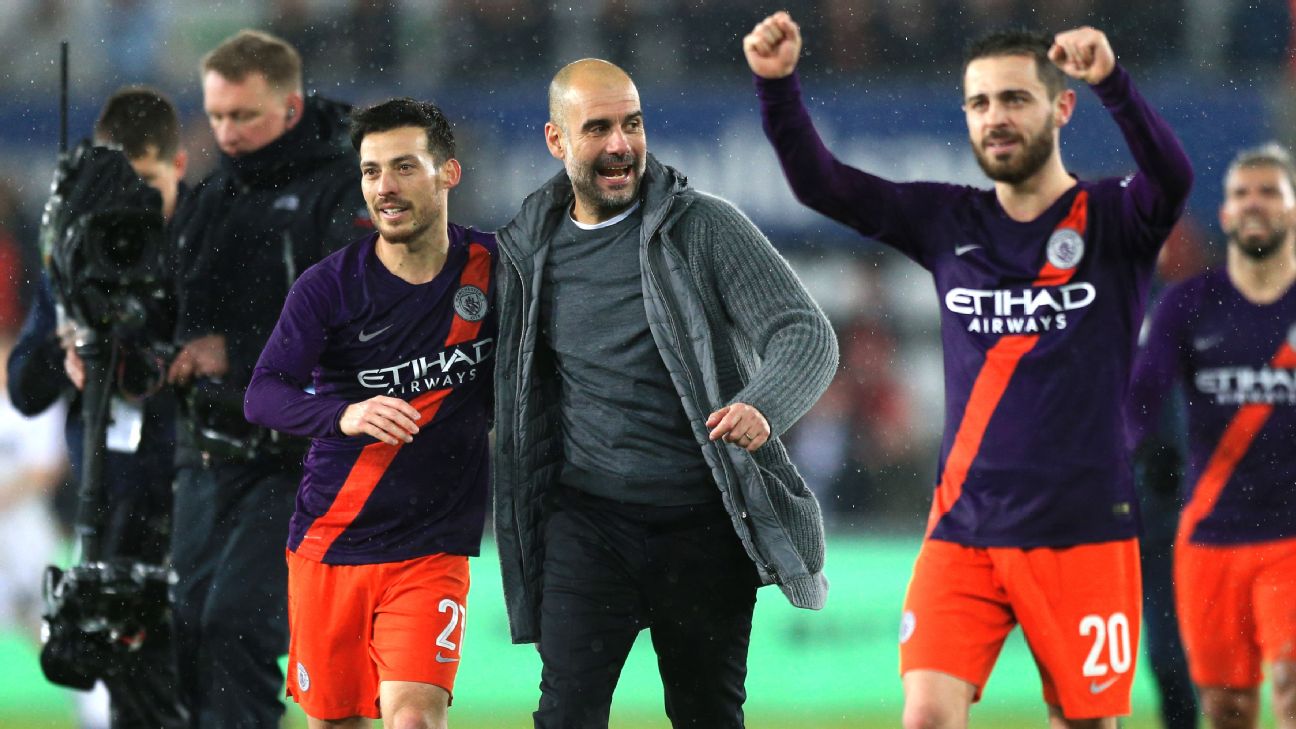 Manchester City are chasing history. Their trip to Craven Cottage to face Fulham on March 30 marks the first of a potential 15 games in 64 days that could end with Pep Guardiola and his players becoming football immortals.

No English club has ever achieved a clean sweep of every competition they have entered in a season. Manchester United famously won the Premier League, FA Cup and Champions League in 1999, while Liverpool pulled off the league, League Cup and European Cup in 1984. They also won a treble of cup competitions — FA Cup, League Cup and UEFA Cup — in 2001.

Having won the Carabao Cup with a penalty shoot-out win against Chelsea at Wembley last month, City are still in the hunt for an unprecedented quadruple and every victory takes them one step closer to succeeding in their quest. Guardiola admitted after Saturday’s dramatic, and controversial, 3-2 FA Cup quarterfinal victory at Swansea that he was “tired” and in need of a break, but while the international fixtures offer a much-needed opportunity for the City manager and some of his players to catch their breath, it will only be a brief respite because the next two months promise to be hectic, draining and career-defining.

They head into their final 15 games on the back of a remarkable run that has seen them win 18 and lose one of their last 20 fixtures in all competitions. The one draw, against Chelsea at Wembley, still ended with victory on penalties; in essence, they’ve walked off the pitch having won 19 of their last 20 games. If they maintain that kind of form, the record books are likely to be rewritten but fatigue will undoubtedly come into play and they will have to overcome formidable opponents to win all four competitions.

Their route to the quadruple has now been confirmed, so what lies ahead for Guardiola and his team?

City have eight games to play in the Premier League and are currently two points behind leaders Liverpool having played one game fewer.

In the Champions League, City know that victory against Tottenham in the quarterfinals will set up a semifinal clash with either Ajax or Juventus, while only Brighton & Hove Albion stand between them and an FA Cup final encounter with Watford or Wolves on May 18.

The Premier League promises to be the toughest to win because City must play catch-up but in some ways, the intensity of their race with Liverpool could help rather than hinder.

Back in 1999, United and Arsenal were locked in a similar battle for supremacy — two outstanding teams who traded top spot on an almost weekly basis until United won the title on the final day of the season. It promises to be the same this year, with City needing to win their game in hand — against United at Old Trafford — to erase Liverpool’s two-point lead and reclaim top spot.

Gary Neville, a key member of United’s Treble-winning side, said in his autobiography, “Red,” that Arsenal’s form and quality meant United “couldn’t afford to relax for a minute. The opposition was so tough, we knew we had to raise our game.” City have the same problem, or advantage, with Liverpool. If Klopp’s team do not drop points, City will have to win all of their remaining games, including the derby at Old Trafford, so their focus will remain sharp and intense.

The next trophy to tick off will be the FA Cup and this, on paper at least, appears to be the least problematic competition remaining for Guardiola’s men. Brighton, who haven’t beaten City since 1989, sit five points above the Premier League relegation zone and they will be huge outsiders in next month’s FA Cup semifinal. If City win that one, then Watford or Wolves will stand between them and a domestic treble.

If City had to choose between competitions over the final two months, it is the Champions League that Guardiola and City’s Abu Dhabi hierarchy are most desperate to win. On its own, the European Cup is the pinnacle for every club, but if it turns out to be the final piece of a quadruple jigsaw, are City equipped to win it?

The quarterfinal against Spurs, whom they will play three times in 11 days, will test City in every department and these games will have a knock-on effect in the Premier League. Only time will tell whether that will be in a positive or negative sense.

If Spurs are overcome, then a semifinal against Ajax or Cristiano Ronaldo‘s Juventus will be a seismic occasion. City have never gone beyond the semifinal stage of the Champions League, losing against Real Madrid in their only appearance in 2016, so they will have to make club history if they are to reach the final in Madrid on June 1.

If they do, barring the shock of Porto reaching the final from the other half of the draw, City are likely to have to overcome one of Barcelona, Liverpool or United to win it. There really is no easy option — from facing the genius of Lionel Messi, renewing the increasingly intense rivalry with Liverpool or facing neighbours United, City’s 15th game in 64 days would be the biggest in the club’s history and leave the players standing on the brink of greatness.

As difficult as it appears right now, the path is clear and Manchester City know exactly what they have to do, from this point on, to achieve what no team has done before.